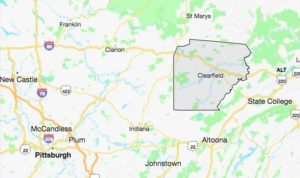 I’ve had a suspicion for a number of years that most of the Pearces in West-central Pennsylvania emanated from one or two families somewhere around Clearfield or Jefferson Counties, then radiated like ripples on a pond into surrounding counties: Cambria, Indiana, and Centre, to name a few. Previously, we had told the story of two Pearce families of Portage and Johnstown, Cambria County, near to where I live. [See link below.] I determined that I am probably not directly related to either, though they lived their lives and had a great influence in communities less than 100 miles from our large Pine Creek, Allegheny County, family. More recently, I had the opportunity to explore several items that further convinced me that just a very few Pearce families are responsible for the spread of the surname in Western and Central Pennsylvania and beyond: first, I obtained a copy of the bicentennial booklet produced by Pine Township, Allegheny County, through the generosity of Supervisor McKinney, a descendant of one of her earliest families; and second, I toured the new Heinz History Center in Pittsburgh and reviewed the story of the Clearfield County Pearces as told by the late Helen T. Pearce. It’s a portion of these marvelous experiences I’d like to share with you today as we further delineate the journey of our surname across America.

The Heinz History Center is named after the late Senator John Heinz and is funded partially by the generous ketchup company of the same name under the auspices of the Western Pennsylvania Historical Society. Housed in an old brick ice storage facility, it lies between the glitzy new Pittsburgh Convention Center and the quaint old Lawrenceville strip district. Visible across the Allegheny River are the regions two new stadiums, Heinz Field, the home of the Steelers, and PNC Park, the home of the Pirates. Many questioned the demolition of the old convention center, which was still very useable, and the implosion of Three Rivers Stadium, which was still being paid for. So, the development of the history center near the thriving warehouse, shopping, and restaurant district was the affirmation of the “Old Pittsburgh” the conservationists were looking for. The H.J. Heinz Company, purveyors of fine condiments, celebrated 150 years in business in 2019, and I recently wrote about our families’ connections to that enterprise.

After sampling the ethnic foods of the strip and touring the first five floors of exhibits at the Heinz, my wife and I settled into the open stacks and computers of the sixth floor library and archives until the 5:00 closing. I had learned, for example, in the permanent exhibit on the second floor that Western Pennsylvania was originally part of Virginia and that most of the west-bound river traffic at the time of the 1803 Louisiana Purchase was serviced from the Monongahela Wharf, just around the “point” from Etna and Allegheny City where the Pearces and Austens left the Forbes Road to cross the Allegheny River heading for Pine Creek in 1820. [See our article sharing that age of early 19th century Pittsburgh.] The 1815 Pittsburgh city directory of only 10,000 names contained no Pearces or Austens, but we know from earlier articles here that a number of Pearces, at least, with several different spellings, were to be found outside the city limits at that time. The 1889 History of Allegheny County, PA, on the Heinz open shelf, lists Andrew and James Pearse as early as 1769 and Robert in 1793 all in Forward Township. The two-volume set offers many additional spellings: Parce, Perce, Pears, and Peairs, to name a few. Francis and Amos Pearce were living in Pine Township in 1808 before our family arrived, the home of what was to be Pearce Mill, according to the Pine Township bicentennial booklet of 1996. But, the 1889 history shows an Amos and Eleanor leaving Pine Township for Ohio Township in 1814. Were we related to them? We’ll explore this mystery in a future article. We have posted a story of some Pearces who settled south of Pittsburgh in a community they named “The Jersey Settlement.” Again, any possible relation is a mystery.

Earlier in the day, as we strolled through the Heinz glass exhibit on the fifth floor, we enjoyed excerpts from some of the wonderful letters exchanged between Thomas and Sarah Pears of 1820-22. Thomas was a salesman for the Blakewell and Page Glass Company, founded in Pittsburgh in 1808 and considered to be one of the oldest in America. He led a hard and lonely life as his travels took him all along the Ohio River. We wonder if the Pears might have been related to us. Earlier articles have indicated that our names have the same origin, “son of Peter.”

Fascinating stories from the late Anne Newport Royall (1769-1854), an author of travel books, are available at the push of a button over the giant Pennsylvania map in the permanent exhibit on the second floor. She traveled the National Road from Baltimore to Pittsburgh in 1828. And, as we said in an earlier article, British author Charles Dickens wrote of his experience traveling the Mainline Canal and Portage Railroad in 1842. His journal entries are also available at the map. I didn’t know that passenger boats were transferred from the Allegheny River to a giant aqueduct that carried them away from the river and into Allegheny City, now the North Side, where they could disembark. That giant structure must have been some sight. It was torn down in the 1850s when railroads replaced the canal system in Pennsylvania [See earlier article on Portage, PA, linked below].

The most remarkable story of the day to me, however, was retrieved from the closed stacks of the sixth floor. As early as 1950, Helen Thomas Pearce of Clearfield wrote about her lineage in a genealogy entitled The Pearce, Klar, Schmehl, Swan, & Smithy Families. A 1968 refinement is simply called The Absolom Pearce Family: Clearfield County, PA, and can be found in the Western Pennsylvania Genealogical Society collection at the Carnegie Library. In that time before computers and electronic databases, Helen depended upon first-hand interviews and family records. She didn’t know who Absolom’s father was, but she believed that he came from Northern Ireland in 1770. Like our Great-great grandfather Richard and 3Xgreat Uncle Charles, whose father Ambrose had probably stopped in Western Pennsylvania before settling in Ohio, Absolom’s family came from Philadelphia to Pittsburgh. Of course, we wonder if our families are related despite the different origination points. Did this early Pearce contact other family members from other parts of the UK? All that is certain is that sometime between 1790 and 1795 this Pearce and his wife both died in a small pox epidemic in Pittsburgh, leaving seven children, including a teenage son, Absolom Abraham (1777-1860). Several things are remarkable to me: how his lifespan was so close to that of our Richard’s (1782/5-1861), and how seven children could have survived a disease so dreadful that it claimed both parents, one that we still fear today as an agent of terror.

Absolom and Elizabeth first lived in Pleasant Hill near Philipsburg, but about 1814 they built a permanent house in an area known as Bigler and Woodland. In 1836 they purchased 201 acres for $807, and later 100 more adjoining, to literally carve a large farm out of the Central Pennsylvania wilderness that was eventually to be called Bradford Township. Absolom was elected township assessor and justice of the peace. Many of his children lived in the town of Bigler, and all were Presbyterians. Helen Pearce’s half-century old account is today available digitally at Ancestry.com and FamilySearch.org (Click on the link above).

Obviously, Absolom’s descendants are many, but several are especially noteworthy. His grandson Russell Pearce moved across the valley to State College and was known for his position as superintendent of the large post office there from the early 1920s until the end of World War II. That facility still serves the Pennsylvania State University. Another grandson, Eugene M. Pearce, became a partner in the Pe-Ro Ice Cream Company of State College. His son Richard and several cousins operated and managed the company, which eventually became Pearce Dairy. I recall the trucks, milk cartons, and large outdoor billboards that all proclaimed the Pearce name when my brother Paul attended Penn State in the early 60s and later when I completed graduate work there in the 70s. We didn’t know then if we were related, but we were proud to say that our milk was “Quality Checked.” The large Pearce Dairy operation was sold and closed sometime in the 70s. A recent telephone conversation with old friend George Lauck, former postmaster of Pine Grove Mills just outside of State College, confirmed all of this. George remembers how one of the milk truck drivers would stop at their family garage and pickup his brother to help the Pearces as they hauled milk from the many prosperous Happy Valley farms to the plant. Recent internet research shows a Pearce Milk Company opening in 2010 and running a successful business since. We assume these are descendants of original State College Pearce family.

We now believe that one or both of the Pearce families of Portage and Johnstown, Cambria County, and most of the others from Indiana and Jefferson Counties, either are descendants of Absolom, the orphan from Pittsburgh, or settled in Clearfield to be near families with the same surname. I telephoned two businesses in Central and West-central Pennsylvania that have Pearces associated with them. Bob Showers Windows and Sunrooms in Philipsburg and Pearce’s Pet Place just south of Indiana, PA. While I didn’t hear from the first, the pet store is owned and managed by Mike Pearce and family. He put me in touch with his father William, who was originally from Burnside, not far from groundhog-famous Punxsutawney, Jefferson County. He’s also doing some checking on his ancestry.

Gradually, the Pearces of Pennsylvania are being sorted into categories according to their immigrant ancestors. This is an ongoing endeavor and new information is constantly being discovered. We hope that you will join in the quest. Meanwhile, if you’re in Pittsburgh, plan to visit the Heinz History Center. Take along a camera, a notebook, and a pencil – pens are considered dangerous and are forbidden in the library and archives. And while you’re that close, only 12 miles, you may as well visit North Park and the remnants of the Pine Creek Settlement. For that matter, write to me and I’ll go with you.

30 Responses to The Pearces of Clearfield & Surrounding Counties, PA