Every family experiences some bad things. That’s the nature of human existence. In a recent popular book by Rabbi Harold Kushner, which deals with his dilemma over the fatal illness of his own child, he explores at great length the inadequacies of traditional answers to the problem of evil and offers what one reviewer calls some “uniquely practical and compassionate answers.” We believe that, despite the unspecified “moral defects” attributed to the Campbell Clan in The New Dictionary of American Names [the combination of “cam” and “beul” means “a wry (or crooked) mouth with arched lips.” See “Introduction to the American Descendants of Thomas and Mary Crawford Campbell”], and the little incident at Glencoe, Scotland, in 1692 [see “Background on the Scotch-Irish”], we Campbells are basically upright, God-fearing people. Certainly the accounts in this series attest to that. And we have been blessed by the Almighty through the ages: large, healthy families, prosperous farms and businesses, and even protection in times of war. But, this article is about the several unfortunate occurrences that have shaken our family to its core. Yes, there have been divorces and business setbacks, but these stories are about death—the kinds of often sudden and tragic events that leave everyone associated with the person shaking their heads and asking, “Why?”

We’ve mentioned before some of the named and unnamed babies, some who died in infancy and others who never took their first breath: the seventh daughter of Thomas Anderson and Jane Ross Campbell; the first born of William James and Rachel Elizabeth Hoffman Campbell, Lloyd Webster (1890-1891) who died of Pneumonia at less than four months of age; the eighth child on Paul Barton and Bertha Ione Campbell Gray, Paul Emerson (1929-1930) who also died of the same awful respiratory disease at age eight months; and the first child of Barton William and Cecelia Elizabeth Brand Gray, stillborn in 1954.

My late Aunt Edna Gray (1920-1997), only nine years old when her brother Paul Emerson died, called him “a beautiful baby with sandy golden curls, bright sparkling eyes and laughter that filled the home and hearts of family who loved him dearly.” She wrote the following poem as a loving tribute because his grave remained unmarked for years, and she envisioned a memorial, fearing people would forget about someone who had lived such a brief life:

On a lonely hillside near a winding path,
A tiny grave lies hidden, monst weeds and tangled grass.
Baby Brother lies asleeping, the cold stone above his head
Tells that we love him dearly tho’ his life on earth has fled.
He came to us in summer, a precious bud so very rare;
Fresh from the Master’s garden, picked by Him with tender’st care.

A little sister, only nine, was little Mother too.
She loved him with a boundless joy, each day his short life through.
To her had come a living doll with sandy golden curls,
And every moment spent with him was as a string of pearls.

He left again in springtime mids’t showers of April rain.
The small pinched face above the grave, watched, tear-stained and mute with pain.
She knew the Master called him and that he had to go,
But anguish of their parting caused her childish tears to flow.

Now safe in the arms of the Master, patiently he waits the day
When they’ll be together forever in God’s home so far away.

Sometimes, what seems terrible at the time turns out to be something good in the long run. For example, family tradition says that my Great-great grandfather Thomas Anderson Campbell (1837-1925), when he was 24-years old, was deferred from service in the Civil War because of a missing index finger. That was probably a blessing because, had he been killed, some of you wouldn’t be reading this article [My Great-grandfather William James Campbell (1859-1954) was born before the war started, so I’d probably still be here to write it]. We don’t know how, when, or where the accident that took the finger happened, but if was his “trigger” finger, it makes sense that he would have been deferred.

William James and Rachel Elizabeth Hoffman Campbell’s youngest child, Ellis Emerson Craig (1906-1926), for whom Paul Emerson was named, was studying for the Presbyterian ministry. He began at Muskingum College, New Concord, Ohio, but later transferred to Westminster College, much closer to home in New Wilmington, PA. Though the details of his death are sketchy, it is believed that he died as the result of a hazing incident, a silly student prank, at age 19. One has to ask, “Would he have survived to serve God had he stayed at Muskingum?” Rabbi Kushner’s book speaks to these special kinds of tragedies. How could God allow his own servants to suffer and die? 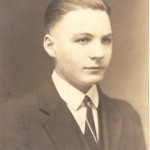 Had Ellis lived just another year, he would have known his brother Clifford’s daughter, Joan. Born in 1927, she graduated from what was Indiana State Teachers College, in Indiana, PA, and taught Home Economics at both Saltsburg Schools and Indiana University of Pennsylvania. She married Bernard James Ganley in 1950. He was known as the coach of IUP’s several-time national champion golf team, but he became interim president at both IUP and Mount Aloysius College, where I teach. Joan and Bernie became the proud parents of a son, James, in 1954. Jim, however died of cancer in 1979 while he was still a student at IUP. Besides his parents, he left a wife, Diana. The University created a living memorial to Jim’s memory, after one of his passions, a well-used hiking trail at the campus park.

The only son of Clifford Anderson Campbell and his first wife, Emma Marie Burgowitz, was Stanley Curtis Campbell (1931-1956). Stanley graduated with a degree in Business Administration from Grove City College in 1953 before joining the Air Force. He married Joanne Reis the following year and Scott Jeffrey was born a New Year’s baby the year after that. But tragedy struck the young family just 10 weeks later when on March 12, 1956, the cargo plane that Stanley was piloting exploded on take off from the Air Force Base at Argentia Bay, New Foundland. The mission had stopped there for refueling on a trans-Atlantic flight to the Azore Islands. His body was never recovered. If there is any bright spot to this sad story, it’s that Joanne remarried several years later and the new father adopted Scott. The couple later had another son.

And yet another Stanley in the Campbell connection experienced a great tragedy. My Uncle Stanley Wayne “Dick” Gray, the 10th child of Paul and Bertha Campbell Gray, had just returned home from the U.S. Navy and was attending Indiana State Teachers College. He and wife Cathy were living outside of town in a mobile home park with their two children, 10-month old James Alan and 2-year old Richard Wayne (1957-1959). One morning the unthinkable happened in an instant: a milk truck had stopped in the driveway to deliver the usual order to the Grays, when little Dickie crawled under it to retrieve a ball he was playing with. The unsuspecting drive backed over him, killing him instantly and sending shock waves through our large family and the entire community. I had just celebrated my 11th birthday ten days earlier, and was asked to be a pall bearer, along with five other young cousins, for Dickie’s funeral. That was a day I’ll never forget. His death at such an early age gave me, perhaps, my first real appreciation for life. As I attended Indiana a decade afterwards, and lived in a funeral home during my college years, I often thought of Uncle Dick’s family and the devastation the death of little “Dickie” must have brought.

As we said at the outset, every family has its share of tragedy, but the Campbells may have had more than their share. If our Maker allows these things to happen in a creation of free choice, then at least we can be thankful that He has promised nothing that we can’t bear. As St. Paul said to the Corinthians, someday we will know even as we are known. He likened our present existence as looking into a dimly lit mirror. Perhaps one day we’ll meet our family members who have gone before, in which case I’m sure we’ll have lots to share.