(Click on charts to enlarge/use back arrow to return)

Do you know your cousins? Not the cousins you grew up with, but the many cousins you are going to encounter in your genealogical research? Once you get far enough into your genealogy research, you will be faced with a list of cousins of varying degrees of closeness to you. Making sense of just how close those cousins are to you is key to understanding your family tree as a whole, as well as where those cousins fall on it. Knowing your exact cousin relationship can also help you verify DNA matches if you do DNA testing. 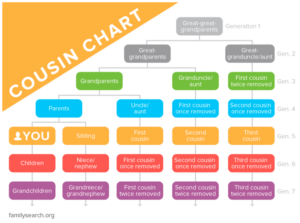 You will probably hear the term “removed,” as well as a variety of numbers in association with cousin relationships when reading about genealogy. These relationships are significant to your research. Your first cousin three times removed, your second cousin one time removed, your third cousin four times removed and more are all meaningful relationships. But what do they mean, and how do you figure out just how you are connected to a particular cousin?

It’s easy! Once you have the particular technique down, you can figure out exact cousin relationships in your head. Cousin relationships that go back farther in time can be worked out by drawing a chart and counting. You will amaze your friends and relatives with your newfound cousin calculating ability, and your genealogy research will become a lot easier and more meaningful to you. It’s a must-have skill for any serious genealogist.

How Do You Start? Calculating a cousin relationship starts with your most common shared ancestor. This may be a grandparent or a 25x great-grandparent (or anything in between or beyond). Once you have the shared common ancestor between you and a cousin, you can figure out your precise cousin relationship with ease. It’s all a matter of generations.

If the son of the son has a son, that makes you and that son second cousins because you share the same generation… Generation 2 from your common ancestor. If you and your second cousin each have a child, your children will be third cousins or Generation 3 from their common ancestor… your great grandmother. Cousins who share the same generation in the family are always a straight number in the cousin tree, with no “removed” required. 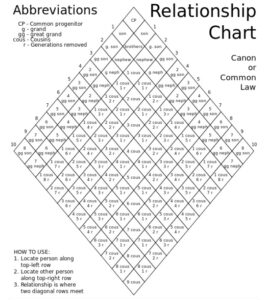 Once you learn to figure out which generations match up and then count the generations removed you or another person are from that matched generation of cousins, you’ve got the whole cousin thing figured out. It’s not really hard at all. Figuring out cousins is all just a matter of counting. Count the generations, and you’ve got your cousin relationship sorted.

Note: For further explanation and graphics, go to FamilySearch.org