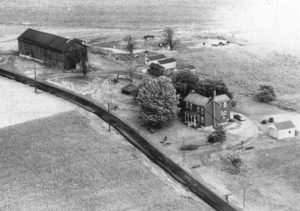 Before claiming their land in what is now West Deer Township, Allegheny County, PA, William Sylvester Gray (1816-1879) and Elizabeth Leslie Gray (1818-1879) were newly married in 1837. Elizabeth (age 19) and William (age 21) joined the experience of the early settlers of America. They were not making a long trek into the frontier but were occupying a hundred-acre tract, apparently largely covered by virgin timber and undeveloped in any way, except possibly one mud trail that may have accommodated a wagon. It ran east to west through the center of the property. What did they really face as they started their life together in the forest? We are confronted by a paucity of facts. Having a few established dates, and some knowledge of the development of the surrounding community such as trails, roads, and churches, we are left with imagination to ponder the rest of a possible scenario.

Two Presbyterian churches had been established on opposite ends of the township. About six miles to the southeast of William and Elizabeth, Bull Creek Presbyterian Church began with outdoor meetings in 1794 and moved into a small log building in 1801. Some two miles to the northwest, Deer Creek Presbyterian Church commenced outdoor meetings with the pastor and pulpit standing in a small shed in 1811, replaced by a log church in 1917. Bull Creek Church was known as ”the mother of churches” of the larger region, spawning other satellite churches in nearby towns such as Tarentum. The apparent growth of both Bull Creek and Deer Creek Churches indicates the emergence of an early population of Scots-Irish and the need to carve out mud wagon trails through the wilds. During these very early 1800s, the wagon trail from Culmerville to Bakerstown, now Rt. 910, was in use, and there apparently had to be some connection between the Leslie tracts and that road. By 1837 when William and Elizabeth were married in Butler those mud roads must have been pretty well established. Getting to Butler and Tarentum for family and farm supplies and for markets to sell farm products was likely a priority in the very early days of growth of the Township. (Much later, in 1851, the great, or “old” plank road from Pittsburgh to Butler was completed. The road was built with oak planks, eight feet long and four inches thick laid crosswise to the passage, currently Rt. 8.)

Elizabeth’s parents, George and Jane Leslie, had claimed 200 acres after their marriage in 1802. They developed 100 acres as their own and later granted the other 100 to William and Elizabeth; it was directly adjacent and to the west of the Leslies. This, of course, meant that the harshness and loneliness of frontier life for Elizabeth would have been ameliorated by having parents close by. Did the couple camp out while they built their small log cabin or had William completed the cabin for his new bride to enter? We know essentially nothing about William Sylvester Gray prior to the point of marriage. If he was present in the community, he very well may have prepared a cabin in advance of the wedding. At any rate, legend has it that a log cabin was erected about 50 yards west of the present-day, old William Gray homestead still standing today.

Located on a little knoll, legend says that it was circled each morning by William Sylvester armed with his musket to check for Indians. There are reports of friendly or curious Indians of the Iroquois, Shawnee, and Algonquin strain in the general area who occasionally sat in on church services. The couple would have had to collect quickly the rudiments of homemaking and the start of wilderness farming—household goods, and implements of forest clearing and planting, horses or mules, cows, chicken, and pigs. The great trees were felled by axe making the task of building and land clearing all the more herculean. The crosscut saw was not in common use until the later decades of the 1800s There was an early 1800s crosscut saw designed only for cutting log lengths (known as bucking). Killing the trees by girdling the bark with an axe, or burning were other ways, of clearing the forest. Outbuildings and animal pens would have been required. An acre or so of clearing that first year may have given them a start for garden produce and a patch of corn and wheat. William Sylvester’s one existing photograph shows a strapping rugged man who may have hired out as a laborer during the winter months to help the family with initial food supplies for the family and the animals.

A flashback to the conditions of the George and Jane Leslie family sheds some light on the early experiences of William and Elizabeth. George and his brother Alexander had claimed the 200 acres after trekking by mules single-file from the settled eastern parts of PA; there were no well-established trails accommodating a wagon across the Allegheny mountains then. After the Leslie brothers had established a rudiment of a home in that first year, in the second year George went back east to bring his new bride back across the mountains on a mule. Cultural shock must have been enormous for Jane. Development in the eastern part of the State was decades ahead of West Deer Township. For example, as early as 1811, a paved turnpike had been opened from Philadelphia to Lancaster. The mountain ridges of eastern Pennsylvania stood in the way of progress. The trip by mule-back for Jane and George was undoubtedly confined to one of several east-west Indian trails. Jane and George, especially Jane, in addition to facing the challenges of wilderness subsistence living, were nurturing eight children from the earliest years of their marriage, 1802, to the last child coming 16 years later in 1818. During these years George was establishing the farm; we do not know if his brother Alexander stayed for a while to help or not.

Three years after the last child was born, in 1821, George and four of the children died of the dreaded typhoid in the very same week. Five years later, in 1826, daughter Margaret died of tuberculosis. The point is that the remaining Leslies seemed to be in no position to offer much help to the new fledgling, start-up family of William Sylvester and Elizabeth when they were married in 1937. Somewhat later in the life of Elizabeth and William, beyond the scope of this little speculative glimpse into the couple’s initial settling on their property, I am tempted to also think about how the future years may have unfolded. As the forest was cleared and forage crops created greater volume, a need for something more than a small log barn must have become pressing. The barn that I knew in my youth was undoubtedly the barn that William Sylvester eventually constructed. I can still remember seeing the long hemlock siding boards some of which had a two inch hole about a foot from one end, indicating transport from the northern woods down river in a floating formation. A sapling or a rope was slipped through the holes to form a raft. We have no idea if the timbers were hewn on site or had to be hauled in from a river site. At any rate some very long cumbersome lumber had to be hauled by horse and wagons which would require a decently cleared road.

We know that in 1861 the Leslies had recovered from their profound family losses such that they could build a new substantial brick house. The brick had to be hauled at least as far away as the closest kiln at Culmerville about five miles away. The development of the roads had to be able to accommodate these heavy loads. Within this same time frame, say about 1859 to 1860, William Sylvester should have been in his prime of life (about 42 years old and a year before he left for the Civil War). He had two sons around 18 and 16 years of age, old enough for the family to tackle a big project. We do not know if community barn raising had evolved yet or if the family was on their own. The need for a first version of a frame farm house may have preceded the erection of the barn, but we have no data. We do know that the current farm house was constructed during the lifetime of Robert Patterson Gray, a son who also served in the war.

Another possible additional bit of information on William Sylvester is that a William Gray (no initial or middle name) appears in the list of Elders for the early Bull Creek Church. Dates of service are given which are apparently the dates of beginning the office, 1849 for William. He would have been 33 years old. The reference may have been to our William Sylvester. The dates fit and I do not know of another likely William Gray in the Bull Creek area at that time. However, much caution is warranted: there were other Grays in the area—the Grays of Gray’s Mill in the nearby town of Russelton, and Sophia Gray is listed in the Bull Creek Church marriage records, 1810.

So, still lots of research to do, but our speculation about the Leslie and Gray pioneers is fulfilling. That difficult errand into the woods for young William and Elizabeth and George and Jane before them turned out to be work that has lasted generations. 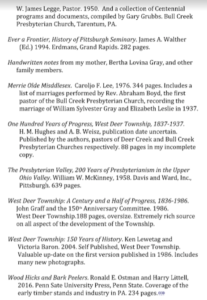