A 1917 Letter Between Miller Brothers: Pennsylvania to Iowa

Click here to see the actual scanned letter of 1917 in .PDF

Over a century ago my wife Susan’s grandfather Howard Miller (1885-1969) wrote a simple, yet insightful, letter to his older brother Earl (1875-1964), who had emigrated to Iowa when he was in his teens because his mother, Susan Bowman Miller (1857-1909), had remarried after their father Dibert’s (1855-1889) early death. We are fortunate that the letter has been preserved as a snapshot of our Miller family history in Somerst County, Pennsylvania. We know that brother Earl was  unhappy after his mother remarried, so he packed up and moved to Iowa with his mother’s sister, Aunt Jennie Bowman, and her husband, Erza Yoder. 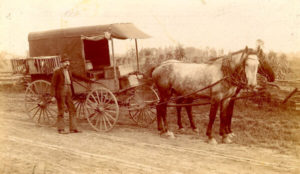 Erza and Jennie ran the Sharon Center general store near Iowa City, and young Earl operated what was called a “huckster wagon.” The Yoders set up organized routes through farm lands and neighborhoods, bringing fresh produce and other merchandise to residents. Earl eventually worked for the telephone company. He would climb the poles and hook up phone service for locals. The Iowa Millers came to own several large and very productive farms, and Earl’s descendants are still hard at work there. 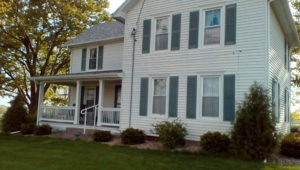 Read more about the Iowa Millers in a wonderful historical essay written by Katelyn “Katie” Miller, Earl’s  great-great granddaughter, and the account of a recent vacation Susan and I enjoyed there. Here now is a transcription of that 1917 letter from Howard to his brother Earl. Notice the casual and truncated style of communication. I have added and bracketed some left-out words and commented for the sake of readability:

I will write you a few lines and mail it at Boswell as we have no mail carrier now; he resigned. I bought the farm [originally belonging to Howard’s in-laws] yesterday at $7,150. Don’t know when I will get out of debt. I helped Aust  [Howard’s brother-in-law Austin E. Thomas who owned an adjoining farm] to thresh yesterday forenoon. I finished [and] just came home [around] 2 o’clock.

Am going to Boswell to doctor as Clyde’s [(1917- 1994) Howard and Sarah’s newborn] eyes are swollen and pasted shut. His bed[room] is pretty cold. Had over a foot of snow last week at one clip. [It] snowed after night.

Part of [the] time have a little corn. [illegible and not understood] Potatoes [are] all dug. [It was] a poor crop of 79 bus[hels] in all over 2 acres. Very few people had a good crop.

Will close for this time, 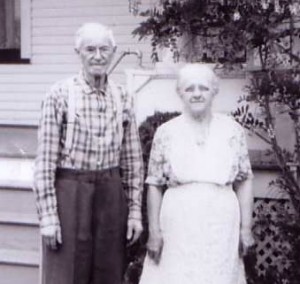 Just for historical and geographical context, you should remember that Howard had purchased his wife Sarah’s family’s property, the Baer farm overlooking the beautiful Quemahoning Reservoir, at the start of America’s entry into World War I. The Baers had come to northern Somerset County from Eastern Pennsylvania with other Amish-Mennonites  in the early 1800’s. Ironically, patriarch Christian Baer (1800-1862) and three of four  generations of descendants in Susan’s line married Millers, all of different Miller families and faiths. In doing so, their religious preferences moved from Amish-Mennonite to Church of the Brethren to Lutheran to Methodist to Presbyterian in only a century and half, and this all took place within less than 20 miles of their first settlement. To read more about the Baer-Miller and other family farms and faiths, see the articles “Lost Civilizations of the Quemahoning,” “Introduction: Our Joseph ‘Yost’ Miller Family,” and “Christianity Comes Home,” among others on this website.

Another interesting aspect of the letter, aside from the discussion of crops and the health of the newborn, is the amount Howard paid for the farm and the hardship the purchase must have caused. At this time we believe that Howard had little choice but to buy the farm, as his father-in-law and mother-in-law, Franklin and Almira Baer had both died of “Chronic Nephritis,” or kidney failure, within the past year. Franklin passed away in 1916 at age 54, and Almira in 1917 at age 62, both quite young even in those days. The medical books attribute the disease to an autoimmune disorder, possibly genetic, but inflammation from overwork is often a contributing cause. Life on the farm offered that, without a doubt. Franklin Baer was young enough to still be active on the farm, so when he died suddenly, some decisions had to be made.The Baer’s oldest son John had died in 1904 in the first mining accident at the new Boswell mine nearby. The youngest son Jacob was just 20 when his dad died and in no position to buy the farm. That left only sister Sarah, married to the 32-year old “farm boy” Howard who must have been in some turmoil. When he writes to brother Earl pondering whether he’ll “ever get out of debt,” we wonder, did he borrow the money from a bank? In today’s money,  $7,150 may have been worth well over $150,000. We don’t know of any rich relatives back then, all just poor dirt farmers. As with most successions of farms in those days, Howard and Sarah were probably awarded the farm by the estate executors because of their interest in and knowledge of farming and a desire to keep the land in the family, with the understanding that Howard would work hard to support his wife and provide for their six-year old son and newborn. Oh, and pay the money back to whomever. 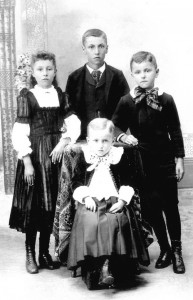 Another interesting question has to do with the relation between the Baers and Thomas families who owned adjoining farms. Remember that Howard’s sister younger Mary had wed Aust Thomas, and apparently Howard and Aust helped each other on their respective farms even before Howard’s investment. Mary had been an orphaned Miller as were the boys in 1889. At this time we assume that she lived with her mother after her father died. She would have been just six then. By the time her mother, the remarried Susan Bowman Miller Keim, died in 1909, Mary would have been 26 and married. Had she met Aust in travels with her brother? Were the Thomas and Baer farms once joined? Further research is needed.

In conclusion, there are still many unanswered questions, but this short letter from so long ago gives us a warm and intimate look into one typical family spread half-way across America at a time when the nation was at war. Today, the old farmhouse and barn over looking the Quemahoning are still occupied and in very good condition. In fact, just a few years ago, the Miller descendants held their family reunion at the site and many stories of the “good old days” were shared. Please check back at this site for additional information as it becomes available.