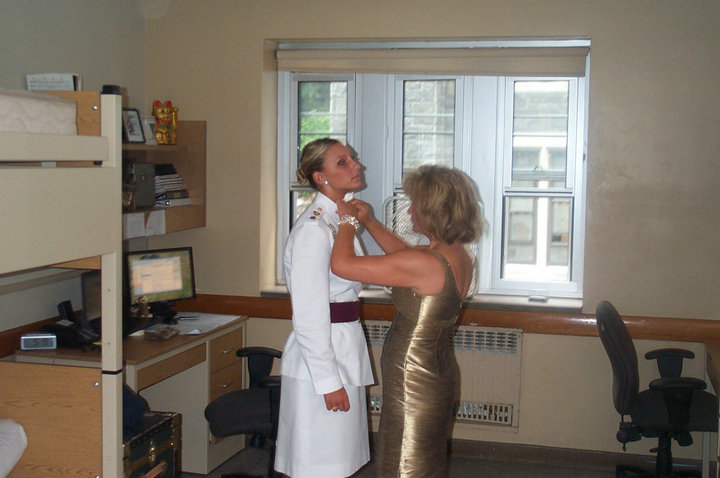 Taylor getting a little help from mom Niki

I remember when my grandniece, Taylor Sutton Pearce, was born back in 1989. We were meeting for a Sunday lunch in the Monroeville, PA, Mall with my brother Carl and wife Jean, her grandparents; Ralph and Ruth, her great-grandparents; and others in the family. Carl had advanced technology in his possession, a fresh VHS recording of the precious newborn, and we all went into the electronics section of one of the department stores in the mall to watch it. This was extra special because Taylor was Carl and Jean’s first grandchild and Ralph and Ruth’s first great-grandchild. Taylor’s parents, Ken and Niki, had settled in North Royalton, Ohio, a suburb of Cleveland, so family get-togethers with them were rare, but a videotape of that special arrival seemed just as good. 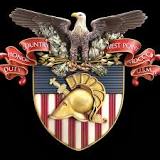 Fast forward a quarter of a century and Taylor has graduated from West Point and quickly advanced through the ranks to Captain and eventually Major. We’ll hear more specifics in a moment from a nationally respected author and filmmaker, but first let me introduce the biographer and provide some context.

Being so devoted to family genealogy and my website, I seldom visit the FaceBook medium. However, recently, I stumbled upon a short article devoted to my Grandniece Taylor while being notified via e-mail of a link added to my wife’s account. With her permission, of course, I read the story and knew immediately that it would be perfect for our family history page. Permission, of course, was sought via e-mail from the writer, Matia Karrell, whom I learned had a webpage of her own called FlyGirlsTheSeries.com. But there’s much more of Matia’s ambition to tell.

FlyGirls, the webpage, at first was dedicated to “the forgotten fliers of World War II,” the women associated with aviation. Their stories often contains the acronym “WASP,” which stands for “World War II Airforce Service Pilots,” something that was totally new to me, and yet both my brother and father-in-law had been involved in military aviation: Paul stood on Nuclear Alert for his country with the great B-52 from Guam during the War in Viet Nam in the 1960’s, and Richard Miller was a ball turret gunner in 35 B-17 runs over Germany in the 1940’s. FlyGirls has expanded to now include modern day female fliers like Taylor and even American women astronauts. Furthermore, Matia has added the subtitle to her page, “Dramatic Television Mini-series in Development,” which she is creating and directing.

The FlyGirls page explains how Matia’s project began. She discovered several pictures among her late mother’s belongings in which she was posing in both a military uniform and men’s overalls. Not knowing what all this might mean, Matia sent the scanned photos to Boston, her hometown, where she eventually learned that, as a harbor city, Boston needed volunteer plane spotters during World War II, and the Massachusetts Women’s Defense Corp (MWDC) was born. My wife and my families have had some interesting connections with females associated with aviation during the war and before: my mother-in-law Hilda Krause Miller was actually a Rosie the riveter in Baltimore during World War II, and Amelia Earhart had crash landed on what is believed to have been family property near Pittsburgh in 1928.

Over more than 20 years Matia has expanded her “epic true story” to include the American women who volunteered to fly for our ally Great Britain during the war because their own country wouldn’t allow them to fly, and African-American women who joined the famous Tuskegee Airmen for the same reason during the same time period. Matia insists that her project “is NOT a documentary” and cites some of the most memorable films and mini-series associated with Americans involved in war. She believes that what they have in common is “memorable characters.” Through FlyGirls, the webpage and especially now the television series under development she explains, “Narrative storytelling can humanize a time in history that makes that era come alive. It is by experiencing the characters’ lives through their eyes that makes us cry, laugh, or even scream back at the screen. This is palpable storytelling.” What follows is Matia’s brief biography of our own Taylor Pearce, the words of which certainly make this young aviator credible and her experiences for her country touching:

Cpt. Taylor Pearce
at the controls of
MEDEVAC helicopter

Meet Captain Taylor Pearce, Aeromedical Evacuation Platoon Leader in the US Army Medical Service Corps stationed at Hunter Army Airfield in Savannah, Georgia. Captain Pearce is a native of Cleveland and the daughter of an Army nurse and UH-1 Huey pilot. She grew up with Army values instilled in her and chose to attend the US Military Academy at West Point, where she graduated from in 2011.

Becoming a pilot wasn’t Pearce’s first career choice. She’d been leaning toward joining the Medical Service Corps because she knew she wanted follow in her mother’s footsteps with a career in the medical field. However, things changed after leading a field exercise during the summer before her senior year at West Point:

“We watched as a Lakota gently landed to the field, completed a full hovering pedal turn, and descended to its stop on the ground. The machine was beautiful, yes, but that’s not what got my attention. I stood there in admiration as a beautiful female Major climbed out of the cockpit. Up until that point, men had been the role models for all the ‘cool jobs’ and if there did happen to be a female in a leadership position, she tended to be slightly older and a bit masculine- not something I could relate to.

Here was this blond, young female, who commanded this fascinating beast of a machine to her will. As they began giving their speech she pulled me aside and asked what I wanted to do in the Army. I told her I was thinking about Medical Service Corps, and she replied, ‘You know, Medical Service Corps Officers can fly MEDEVAC.’ And that was it. That was my calling.”

Upon graduation from Flight School in Fort Rucker, Alabama in 2013, Pearce was assigned to Camp Humphreys, South Korea, for a year where she executed several MEDEVAC missions in some of the worst conditions, made dangerous by mountains, wires and highrise buildings. She even had the opportunity to participate in a NATO mission that transferred NATO observers to the Yeonpyeong islands to monitor gun firing lines.

In 2014 she departed Korea for Hunter Army Airfield, but nine months later she was deployed to Afghanistan as part of a small detachment providing MEDEVAC coverage to southern Afghanistan from a small tactical base known as Dwyer. Her learning curve shot up over the next nine months where she flew through dust storms and enemy fire and participated in power management, mission planning, joint operations, and an accident recovery mission.

Pearce and her detachment were located in a remote field site and so it was up to them to handle the day-to-day aircraft maintenance. Medics, pilots, and crew chiefs pitched in to ensure maintenance was completed. Pearce’s knowledge of the inner workings of the helicopter grew as she spent time performing maintenance on it. Eventually, she was appointed Pilot-in-Command at Dwyer, a place she says she will never forget.

Captain Pearce is indebted to the WASP, who paved the way for her and all women to fly… “Because of their sacrifices, I am now able to serve my country in one of the most rewarding, fulfilling, and – lets face it – fun jobs there is. I wonder if they knew that their challenges- the lack of facilities and funds, the resentment from many male counterparts, and the lack of military benefits or recognition, were hard first steps to paving the road for future Fly Girls such as myself? Today I enjoy the luxury of being treated as an equal, of receiving the best aviation training in the world, and flying without reserve into some of the most austere conditions around the globe, thanks to this group of brave women. I am in completely indebted to their sacrifices.”

We are too! Thank you Captain Pearce for your brave service to our country!

* I have changed the title to match Taylor’s married name, Ridge. She and husband David  have two children: Ian and Carson Luke. Taylor was also promoted to the rank of Major recently and re-assigned to the U.S. Army MEDEVAC unit in Hawaii. Brother Logan, a Captain, is now serving as an instructor at West Point. He, his wife Amanda, and daughter Charlotte are happy to be under one roof again.

2 Responses to Serving Her Country in the Army Tradition: Maj. Taylor Pearce Ridge*, a brief biography