This is primarily the story of our Joseph “Yost” Miller family, which has occupied northern Somerset County, PA, for 235 years. Unfortunately, unlike our other Virtual Tours in this series, we have not included precise directions for finding many of these locations. There are just too many back roads in this part of America. As we revise this page, we will try to be be more helpful, but the best recourse is to seek a private family tour guide. And for that we say, “Just ask.” We hope you also view “Some Community Facebook Pages: Miller-associated Families” to get the full picture. The difference between that post and this is that these links are .com and .org as opposed to Facebook pages. For your best impression of these areas as they relate to our family history, you’ll want to consult both, as well as the links to E-gen. We’ve included here churches, cemeteries, homes, and farms, so click away and plan your visit before you go. A more-detailed map is available online. We continue to discover new locations and will add to this page regularly, so do check back. 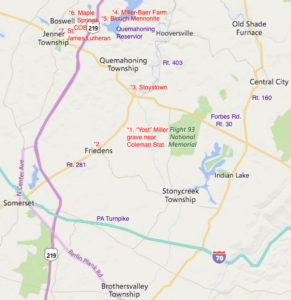 1. Cemetery at Coleman Station – Our Miller family was among the first Germans to claim land  west of the Allegheny Mountain. Probably following the old Forbes Road after the Ft. Stanwix Treaty of 1784 between the Colonies and the Natives, Yost (1748-1811) and his brother Jeremiah left Lancaster County for Somerset. The graveyard is hard to find: turn left onto Pompei Hill Rd. just off Rt. 281 south of Stoystown, then take the first right to the top of the hill. A stone wall protects this 200+ year old burial ground where Yost, wife Anna Maria, and others sleep. The Flight 93 National Memorial is nearby.

2. Friedens Lutheran Church & Cemetery – Continuing on through farm land, across the railroad track, take several right-hand turns back to Rt. 281. Yost’s son, Joseph A. (1781-1860) and his father-in-law Lt. Henry Shaffer (1751-1834), who was active in the American Revolution, founded the Lutheran church here. Shaffer’s grave is well-memorialized, but Joseph lies just down the road, rather unnoticed, in the Boyt Cemetery.

3. Stoystown IOOF Cemetery – The newest and largest of three graveyards in this important stopover on the Forbes Road, the Odd Fellows Cemetery lies south of town across Rt. 30. Many of our Miller and associated families are buried here, including Bowmans and Zimmermans.

4. The Miller-Baer Farm – Grandfather Howard Miller (1885-1969) purchased this magnificent piece of property overlooking the grand Quemahoning Reservoir from the estate of his father-in-law, Franklin Baer (1862-1916), after WW I. The road is now called Pheasant Lane, and the farm offers a glimpse of live a century ago with barn, summer house, orchard, and of course, a grand two-story house with large front porch for relaxing. See our “Photo Album: Miller” for more.

5. Blough Mennonite Church & Cemetery – Near the corner of Rt. 403 and Woodstown Highway north of the village of Jerome, this old wooden house of worship was originally occupied by the Amish. As they migrated west, our Baer Mennonites worshipped here. Still vital to the community, the church offers a day care center and even has a Facebook page. Grandparents Christian and Elizabeth Baer rest in the first row of the cemetery.

6. Maple Springs Church & Cemetery – Just south off of Rt. 403, after crossing new Rt. 219 and before arriving in the former coal mining town of Jerome, the next generation of Baers, now Church of the Brethren, lived, worked, and worshipped. Grandfather Abraham is, as were his parents at Blough, buried in the front row of the cemetery here with wife Elizabeth.

7. St. James Lutheran Cemetery – One more generation and one more change of denomination for Franklin and Almira Baush Baer, who converted to Lutheranism and moved, again, “just down the road.” Perhaps it was the influence of daughter Sarah Jane Baer (1891-1972), who had married Howard Miller who had literally “bought the farm,” the Baer family farm that is, as mentioned earlier.  Although the church was torn down after a merger of three congregations who rebuilt and moved to Jennerstown around 1970, the graveyard holds five generations of Millers and associated families.