The Gunner & The Riveter 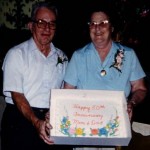 This article is intended as an elaboration on the taped interview Richard Miller did in 1999 at the Pennsylvania Historical Center in Somerset, PA, for a special exhibit on area men and women who served America during the Second World War. That information has been transcribed and is included in this series under the title “35 Missions Over Germany: Richard O. Miller in WW II.” We want to go more in depth in this story about his personal life, especially his marriage to Hilda Krause. They represent a fairly typical American couple whose lives were affected in many ways by the war. Their story is one of sacrifice and bravery, and we believe that it should be recorded for posterity.

Richard is the third of five sons of Howard Pearson Miller (1885-1969) and Sarah Jane [Baer] Miller (1891-1972), born October 20, 1920, who lived on a dairy farm that still overlooks the majestic Quemahoning Reservoir in northern Somerset County. Growing up, his chores included fieldwork, milking, and generally helping his parents and brothers with anything that needed to be done. He walked to and from school in Boswell, at least an hour each way, in all kinds of weather. When he graduated in 1940, he found the lure of a better job in a far away city very appealing. He started as a warehouse assistant for Montgomery-Ward in Baltimore, but before long he signed on as a laborer at the Calvert Distillery and was soon promoted to night watchman. Before he left home he had been dating a young woman named Hilda Krause from a farm in nearby Jennerstown. She was born August 9, 1921, the daughter of Charles Frederick and Annie [Lee] Krause. Hilda had a brother, Clyde, who was married and also living in Baltimore. Dick and Hilda continued to see each other and decided to marry as soon as they turned 21 and before the war could separate them. They exchanged vows on August 27, 1942 at St. Mark’s Lutheran Church in Baltimore with Hilda’s brother Clyde and his wife Jean as witnesses.

The next year, Richard was drafted into the Army but was placed in the Air Corps, predecessor to our modern Air Force, “because of his good health,” he says. Meanwhile, Hilda took a job as a riveter at the Glen L. Martin Aircraft Factory in Baltimore to be near her husband. Their specialty was manufacturing seaplanes. She was not unlike the mythical “Rosie the Riveter” of American wartime newsreels, working hard back home while her husband went overseas.

The truth is that this Rosie soon returned to her family farm in Jennerstown to work, except for times during his stateside training when she could be with him and work in the same town as the base. One of her many jobs back home was cooking for the actors at the Mountain Playhouse in Jennerstown.

Dick’s basic training was in Florida where, he recalls, the temperatures on the beach exceeded 100 degrees. Other assignments included Tennessee, Colorado, Texas, Texas, Nebraska, and Nevada. His defining call came from the 369th Bomb Squadron to be a ball turret gunner on the B-17 named “How Soon?”

He was to be stationed in England. The details of that can be found in the previous story, but suffice it to say that he is fortunate to be alive. He holds two medals and is recognized for 35 missions. Dick returned to the states toward the end of the war and was stationed in Nevada as a gunnery instructor for the B-29’s. He was honorably discharged in 1945 with the rank of Staff Sergeant.

The following year Dick and Hilda’s first son was born, Daniel Lloyd. Three years after that, my wife Susan Kay was born. In 1954 a premature stillborn baby girl was laid to rest in the family’s plot at St. James Cemetery near their home along Rt. 601. Dick built that two-story, three bedroom brick house with adjacent workshop and two-car garage, which seldom held a car because of his abundance of tools and building materials. And there was a massive shelter to hold timber and boards of all shapes and sizes. His first job was with a contractor named Joe Miller, but he soon formed his own cement and masonry contracting business. He hired as many as 12 to 14 men at a time during the busy season. Right up until his death in 2015 at age 94, he could still point to barn foundations, block garages, and porches all around Somerset County that he built. After about 25 years, however, the hard, heavy work became too much and his health forced him to close R.O. Miller Contracting and, with the help of his brother Alton in upstate New York, started Miller Fire Equipment. He sold and serviced fire extinguishers throughout the area until he reached the age of 70, when he officially sold the business and retired. We’ll discuss what he did then in a minute.

Hilda worked for pay at various jobs, including cafeteria assistant and mail carrier, but her primary calling was to be a stay-at-home mother for her children. She volunteered her time with the Girl Scouts, church sewing ladies, vacation Bible school, and other organizations like the Society of Farm Women. In addition to taking her Girl Scout troop to Washington D.C., she involved them in camping and service projects, visiting shut-ins and making holiday baskets. At the Jennerstown United Methodist Church, where she and Dick were members, she helped make as many as 100 baby quilts and lap robes a year, donating them to organizations like Birthright and nursing homes. Perhaps her talent came from her Amish mother. One year, she and Dick made a 3-by-5-foot cardboard model of their church, complete with stained glass and steeple, for a float in the Jennerstown Fall Festival parade. Whether it was her children, her grandchildren, the neighbors’ kids, or the Sunday school, Hilda was always making and demonstrating crafts: tiny figures inside egg shells for Christmas and Easter, decorations of all sorts, paintings in watercolors, and even a working trumpet from copper pipes with her granddaughter.

Hilda’s passions, and the things she spent the most time doing, were painting landscapes with oils, gardening, and canning. She’d set up her small easel on the kitchen table after a meal or whenever she had time. The realistic renderings always went to friends and family members as gifts. There’s no doubt that much of her artistic work will be around for generations to come.

What she and Dick couldn’t raise in their garden they bought by the bag and basketful from area farms and fruit markets: corn, peaches, apples, even sides of beef. They canned and froze as much as they could and, with the rest of the family, ate like kings year round. Hilda was known for her green thumb with flowers also, outside in the summer and inside the rest of the year. She could take any sprout and make it grow into a lovely, blooming plant.

Dick’s volunteer work included maintaining the church and helping with a Boy Scout troop. He was Director Emeritus on the St. James Cemetery Association board until his death. But, his passion was the Boswell Fire Department. He certainly had a vested interest with his fire extinguisher business, but he held nearly every office including President. In later years he was named Chaplain and served with the local Fire Police. He was also active in the Somerset County Firemen’s Association where he also served as Chaplain and President.

In the mid 1990’s, when they were in their 70’s, the brick house became more than they wanted to maintain, so Dick and Hilda decided to convert the second-story apartment, which Dick’s mother had occupied before her death in 1972, into a ground floor apartment. With Dick’s years in the building [and demolition] business and Hilda’s creative vision, they hired a Johnstown house mover to jack the apartment up, remove the first-story blocks, and lower the six room structure to just over the old cement floor of the garage and workshop. After the foundation was repaired a spacious deck and side porch were added, making their new home very comfortable. Dick also built a new one-car garage and smaller workshop adjacent to this. Most people would never have thought of such a plan let alone have the courage to carry it out. The old brick house was sold to a similarly ambitious young family, who have been doing quite a bit of remodeling of their own lately.

Both Dick and Hilda had a great many health problems over the years, and in 1997, just 2 ½ months after they celebrated their 55th wedding anniversary, Hilda acquired meningitis and died on November 11. She was buried at St. James. She was survived by her children and their spouses: Dan and Carolyn Miller of Alum Bank, Bedford County, and Susan and Larry Pearce of Jenner Township, Boswell. Dan and Carolyn’s children are Tate Bradley Miller and wife Renee of Altoona, Blair County, and Wendy Sue and Mark Cable of Conemaugh Township, Somerset County. Mark and Wendy have three daughters and one son-in-law. Susan and Larry’s children are Dr. Annie Rebecca Pearce, of Radford, VA, and Matthew Carter Pearce residing in Charlotte, NC.

After the death of Hilda and Dick’s open heart surgery in the 1990’s, he sold the family estate and moved to the independent living section of Arbutus Park Manor in Johnstown. After assisted living was needed in 2012 he moved to the luxurious Richland Woods Personal Care Center, and then in the final phase of his life, he moved to skilled nursing at Laurel View Village, Davidsville. We still humorously state that he knew half the residents there and was related to the other half.  In addition to the many activities the kind staff involved him in, such as country rides and fishing at the Quemahoning, Dick continued to visit and phone friends. His life was full and rich right up until the end on January 5, 2015, when a series of illnesses such as the flu, Bell’s palsy, pneumonia, and kidney failure took their toll. While his death at such an advanced age was not unexpected, it caused a great void in the lives of his family, friends, and caregivers. A moving funeral celebration with full military honors was held at his church in Jennerstown, and now he is at rest in the St. James Cemetery with his beloved Hilda.

Surely there is some symbolism in the title to this story, “The Gunner and the Riveter.” We know that both Dick and Hilda were products of rural farm life, but their involvement in and influence by the Second World War created a marital tie that lasted over half a century. Furthermore, it seems that Dick has always approached life as a proverbial “gunner,” happy-go-lucky at times, aggressive at others, especially in his younger days. Sometimes I jokingly refer to him as a “banty rooster.” Part of this is because of his small stature and quick movements. The ball turret gunners, after all, were the little guys who could fearlessly fit down in that tiny space ready for whatever the enemy threw at them. Hilda, on the other hand, was always the “riveter,” working behind the scenes trying to bring people closer together, establishing bonds of friendship and good will. Their talents and personalities complimented each other for 55 years, an example of a exemplary biblical marriage and lasting partnership of true friends. For more about the lives of Dick and Hilda, see the Memorial page.