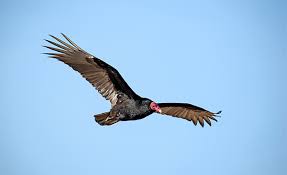 It’s mid-autumn in the New River Valley, southwest Virginia. My wife and I have finally prepared our Pennsylvania home for winter – closed the pool and brought the firewood to the back porch. We’re now enjoying the bright fall days of colored leaves and lots of wildlife from our daughter’s patio. But wait: we see a whole flock of turkey vultures overhead, with their massive wingspan and bald heads. Despite this, they don’t really fly, but glide on the beautiful currents of air that stretch to get over the Blue Ridge. Thirty inches long, the mysterious creature only weighs three pounds. Among them must be the three magnificent birds we had seen atop a barren tree on the way to buy groceries earlier in the week.

How ironic! Turkey Vultures neither buy nor consume “groceries.” They are carnivores that God has commissioned to clean-up the carcasses of the dead. Southwest Virginia has an abundance of wildlife: deer, turkey, rabbits, you name it, many killed by hunters, cars, and other predators. But I first learned of these flying carnage disposers when I first researched the American Civil War back in high school. In the three-day Battle of Gettysburg, mid-summer 1863, 0ver 22,000 men were wounded, nearly 9,000 of whom died, and nearly as many horses. My Great-great grandfather William Sylvester Gray (1816-1879) was a teamster during the battle, one of the men responsible for removing the dead bodies from the battlefield, according to the book, Under the Red Patch . But scientists and historians know that teamsters weren’t the only ones interested in the carrion of that awful war. By Googling “Vultures at Gettysburg,” you’ll find in the books, articles, and Youtube videos that some 900 descendants of the thousands of birds that descended upon that small patch of farmland have survived. I learned that ornithologists at our daughter’s nearby Virginia Tech have captured, banded, and studied the vultures who have glided south along the Appalachians over the past 40 years.

I also learned of a number of scripture passages mentioning “Vultures” in the Bible. For example, the ancient Israelites were commanded what they could consume and what they mustn’t: “You may eat any clean bird, but these are the ones which you shall not eat: the eagle and the vulture and the buzzard . . . “ (Deut. 14: 11-12) The list goes on and is very specific. Likewise, Jesus, in describing the dead during the Second Coming in the New Testament says, “Wherever the corpse is, there vultures will gather.” (Matt. 24: 28) In another Gospel, He is even more specific. After explaining that “Two men will be in the field; one will be taken and the other will be left,” the disciples ask, “Where, Lord?” and Jesus replies, “Where the body is, there also the vultures will be gathered.” (Luke 17: 36-37)

Surely, the Vultures have a different assignment than the many other birds mentioned in the Bible. I don’t believe that the battlefield is necessarily the Second Coming, but it could be for some. I do delight in the sight of a bird bigger than a drone, with a six-foot wingspan not flying but gliding, watching us even as we watch him and remember his particular place in God’s nature.