My maternal great-great grandfather was Robert Patterson Gray (1844-1928). His father, William Sylvester Gray (1816-1879), served the Grand Army of the Republic (GAR) for a time along side Robert’s older brother, Samuel Alexander Gray (1842-1919), beginning in 1861 in the another regiment, while the younger Robert ran the family farm back home, not enlisting for service until the final year of the war. In 1864, Robert was only 20 years old. This article is intended to be another in the Civil War series devoted to our Gray ancestors, especially building on what we knew in “Robert P. Gray in the American Civil War.” Earlier related stories include: “Uncle Samuel A. Gray: Part I – The Civil War,” “Uncle Samuel A. Gray: Part II – A Letter from Civil War Camp,” and “Uncle Samuel A. Gray: Part III – Moving West.” In particular, this piece highlights the brief journal that Robert kept from the time of his enlistment in late summer 1864 until the end of the year.

Robert signed up to fight for the Union cause in Allegheny City, what is now called the North Side of the City of Pittsburgh, just a short wagon ride from the family farm in Bairdford, West Deer Township, Allegheny County, PA, on August 30, 1864. No doubt it took several days for the organization of the new 6th Regiment to take place, a unit devoted to heavy artillery. Historian Samuel Bates says that the men came from six counties in Western Pennsylvania, including Allegheny. Within two days of its organization in mid-September at Camp Reynolds, formerly Camp Copeland, near Pittsburgh, Robert and the rest of the recruits were put on a train for Washington, D.C., where they were assigned to the Second Brigade of DeRussy’s Division. The 6th Regiment was then “armed and drilled as infantry.” 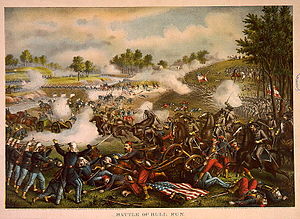 By the end of  September, the 6th Regiment was detached to guard the Orange and Alexandria Railroad that lay from Alexandria west to Manassas, Virginia, where the two deadly Battles of Bull Run had been fought in 1861 and 1862. I doubt that Robert would have been permitted to keep any kind of daily written records at this tense time. This sort of thing in enemy hands, in the event of capture, would not be good, to put it mildly. However, by mid-November, 1864, Union General Sheridan had given up watching the railway, believing that the Shenandoah Valley was at last safe from Confederate attacks.

Robert’s 6th Regiment was then ordered back to Washington to one of the surrounding forts: Marcy. We don’t know if Robert had kept a diary before November 1st, but this sounds like the time, with more idle moments and less military threat, when Robert would have begun to jot earnestly in his journal. Now, with more time and space to train, according to Bates, the 6th was “instructed in heavy artillery service.” Robert writes on December 9, “Drilled on the heavy artillery,” and again on the 16th, “Fired off the big cannon.”

Called “The Battery,” the regiment probably had six cannon and as many as 144 men led by a captain or lieutenant. All during the winter months of ’64-’65 and until the victories of Grant and Sherman that assured the end of the war in April, the 6th remained on duty in the forts covering the nation’s capital. According to Robert’s journal, his marching orders to go back to Alexandria had come at 2 in the afternoon of November 13. The men rested until 10 that night, apparently preferring to travel in the cover of darkness. Facing a distance of probably more than 60 miles, it’s not clear how far they got by the early morning of the 14th. He writes, “Lay in yard. Soldiers rested til morning. Started on the march for Fort Marcy. Bivouaced in the pines overnight.” Closer now to Union territory, they “started [again] at daylight on [the] march.” His unit finally arrived on the 15th at the fort, apparently half starved and ready for a good rest.

Here’s where a bit of geography and a few definitions are needed. To “bivouac” is to camp without covering. In Robert’s case, the pine trees provided some shelter, but later references to inclement weather would make that very uncomfortable. While Robert had barracks at Fort Marcy, weather still played a very important part in this soldier’s daily life. Probably in Northern Virginia on November 9th, Robert simply writes, “Wet and showery.” By the 23rd, after a night of guard duty, he says, “Fine cold day on picket. Stood out all night.” By December, most every day is cold, wet, and foggy. On the 8th, while on picket duty, he “lay out on the roadside.” We wonder why? “Commenced snowing for the first time,” he says on December 9th, “About 3 inches.” The next day he gets his boots mended. Can you imagine holes in your footwear and standing out in the snow while on guard duty? No wonder that on the 17th, Robert is suffering with a “headache and sore throat.” The next day he apparently gets permission to stay in his quarters, where his writes a letter home. He’s “still of duty on the 20th,” and the next day he writes, “It snowed last night. Wet and sleety today.” After picket duty on December 26th, Robert remarks how it had “rained all night.” Imagine the drills, the fatigue duty, the inspections, and the dress parades in conditions described on December 28th as “Very muddy and damp weather” or on the 14th, “In the splashing mud and snow.” 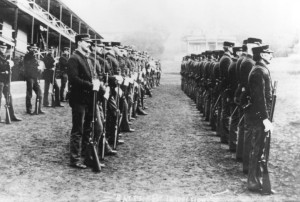 Fall in for inspection, drill, and dress parade

It’s also sad to this observer that neither the Thanksgiving nor Christmas holiday meant anything to Robert or perhaps the rest of the soldiers. President Lincoln had taken the occasion of the Gettysburg Address in 1863 to proclaim November 26 as a “National Day of Thanksgiving.” Robert writes on that official holiday that, while it was a “Fine day,” there was “No drill,” just a “Dress parade” at what he calls his “home,” Fort Marcy. Likewise at Christmas, there is no mention of any frivolity or sentiment. He simply pens that it was a “nice day,” that he “turned in” after his usual picket duty,” and that it “rained all night.” On the other hand, one phrase that jumps off the page, on December 26th, is “Savannah taken.” Despite coming off a wet time of picket duty, Robert seems to rejoice at hearing of this milestone in the war. Wikipedia relates that General Sherman’s “March to the sea” began with his Union troops leaving the captured city of Atlanta on November 15 and ended with “the capture of the port of Savannah, GA, on December 21. His forces destroyed military targets as well as industry, infrastructure, and civilian property and disrupted the Confederacy’s economy and its transportation networks.” We must remember that, despite the relatively short distance by water from Savannah to Washington, the important news took 5 days back then to reach these troops.

Another positive collection of words includes the charming phrases that Great-grandpap Robert uses, almost playfully, seeming to come when he’s off duty or has a day off; he simply writes, “Nothing adoing” or “Just lying around.” It’s good to hear these indications of apparent joy and relaxation when the tedium of war and weather seems to penetrate every day. 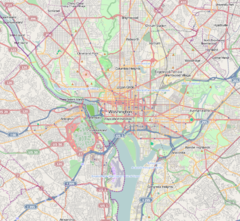 Washington, DC
Capitol of the Union

As for geography, we assume that the reader knows where Washington, D.C. is located. Alexandria, VA, is just south of the Pentagon and Reagan National Airport along the Potomac River. When Virginia went with the Confederacy at the start of the war, Union forces immediately occupied Arlington and Alexandria for the defence of the nation’s capitol. It was near Alexandria in 1863 that Robert’s brother Samuel was held by the Confederates awaiting Parole status. Two earthenwork fortresses were responsible for protecting Washington from the south, Fort Ethan Allen and Fort Marcy. Robert refers to these frequently in his journal.

Several other military terms that are used and need to be understood to be appreciated are “caisson,” as on December 24th, Christmas Eve, when Robert “carried shot and shells to fill the caissons. That can refer to either or both the wooden chests that hold the munitions and/or the horse-draw wagons that carry the ammunition chests. Another is “fatigue duty”: labor assigned to soldiers that doesn’t require the use of arms. Robert pulls plenty of pickets, or guard duty, but also his share of fatigue. On December 7 he writes, “On fatigue duty shoveling sand and cutting sod.” Remember that both Forts Marcy and Ethan Allen were earthenworks that required much maintenance, especially in the rainy weather. 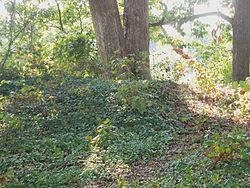 While we surely will never know all the experiences our Robert had while defending his country, we are glad that he availed himself of some positive opportunities, such as going to church or chapel and even prayer meetings on Sundays. This was a practice that he continued for the rest of his life. On the other hand, perhaps, we read that on November 18th, he “pressed some turnips into the service” at an old blacksmith shop. What could this possibly mean. If I’m reading “turnips” correctly, did it have to do with the root plant? Several days earlier he wrote about being “out of grub.” Was he hungry? Another definition of “turnip” is “a large, thick, old-fashioned pocket watch.” Could this have been a reference to a timepiece?

The men of the Pennsylvania 6th Regiment were mustered out from Fort Ethan Allen on June 13, 1865, and returned back to Fort Reynolds near Pittsburgh by rail, where they were released on the 17th. After his honorable discharge that year, about two months after the armistice was signed at Appomattox that signalled the end of the terrible war, we know he returned to West Deer to help his father William, then 49-years old, operate and eventually inherit the family farm. Unfortunately, we hear nothing from Robert again until the turn of the century, after his father has long passed, when he begins ongoing correspondance with his Brother Samuel who, with the help of his military benefits, has taken up homesteading in Missouri. See the 1901 letter and the 1906 letter, for examples. Other recently discovered, transcribed, and posted letters with commentaries include ones to his wife Annie Norris Gray (1850-1922) [letter & commentary not yet posted] back home after he had moved to Florida in 1911 to watch over his real estate investments there; from his sister Martha Anne “Mattie” Edmonds (b. 1853) in Seattle,Washington, as he pays off an inheritance to their unmarried caretaker sister Sarah Jane “Jennie” (b. 1838); and to his oldest daughter Edna Jeannette “Janet” Kellar (1887-1980) in sympathy over the loss of her first child in 1913.

Finally, I was thrilled to handle and transcribe and now attempt to interprete Great-grandfather Robert’s Civil War journal. Imagine looking down at writing that is over 150 years old! I’m planning to revisit the original journal at cousin Dr. David Gray’s soon, where I’m hoping to find additional pages, after which I’ll add to this treatise. But meanwhile, I continue to research as many Civil War resources as I can find. Two that have been helpful in providing historical and visual context are the March 15, 2015 cover story in Smithsonian magazine, honoring the war’s sesquicentenial, and the 2012 Spielberg film Lincoln, which drew wide acclaim. Many other books and movies come highly recommended. It’s impossible to read or view these account without thinking of the bravery, patriotism, and personal sacrifice of our William, Samuel, and Robert. I’m sure you join me in giving thanks that they returned to their homes and families to tell their stories. I’m very grateful to have this opportunity to share my knowledge here. This is what I have so far of Robert Gray’s 3 X 4-inch, leather-bound Civil War journal that begins on November 1, 1864:

Various Wikipedia articles and other internet sites as linked