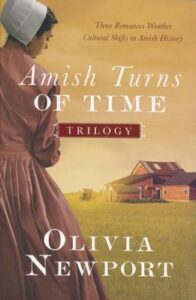 Thanks to our church library, my wife Susan has had to purchase very few books to quench her thirst for romance novels. Over the years, one trilogy by Olivia Newport stands out because of how close to home it hits. Susan’s maternal grandmother, Annie Lee, was raised in the southern Somerset County Amish community of Niverton, and Newport’s second story, entitled, “Meek and Mild,” has its setting there. The light drama follows a fictional couple in the years before their marriage. Clara Kuhn and Andrew Raber struggle to determine where to worship and what day-to-day principles to follow as new members of the Church. Their families’ congregations listen to Bishops Witmar and Yoder of the two Districts that include their Flag Run Meetinghouse and two others just over the border in Garrett County, Maryland, in the early 20th century. 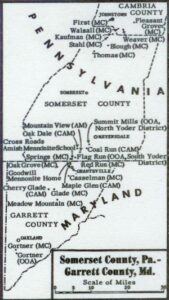 The name of Newport’s trilogy, published in 2015 by Shiloh Press, is Amish Turns of Time. The subtitle alludes to cultural shifts in Amish history as they promote a simpler lifestyle and strong family values. She says:

In the early days of their history, the Amish would not have looked so different from the general population as they do today. They lived apart from people they regarded as unbelievers and practiced a form of Christianity that was not popular, but they dressed and cooked and farmed the same way everyone else did. It was the culture around them that evolved and accepted change at increasing speed, and the Amish had the strength to ask, “Is this good for our community?”

The first story in the trilogy, “Wonderful Lonesome,” takes place in Newport’s home state of Colorado. The third is entitled, “Brightest and Best,” and plays out in Geauga County, Ohio. She admits to “have taken some liberties with the time frame” in the Casselman Valley account, but she carefully has the characters cite scripture in relating the leadership decisions of the Bishops and Ministers. While most of her characters are fictitious, Newport writes that the man she calls John Stutzman is based on Rev. John Yoder, who in the early 1920s refused to shun. But another real-life figure, Moses Beachey, was more cautious, resisting a separation among the worshipers. Nevertheless, within two years the branch bearing the Beachy name allowed automobiles, electricity, and telephones, far different than what is today, a century later, referred to as “Old Order Amish.” Ironically, until 1953, the meetinghouses at Flag Run and nearby Summit Mills on alternate Sundays shared space for each group. After that, the Beachy Amish built a more modern meeting place. 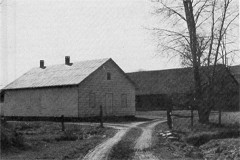 The Ohio setting for the third story was selected because that was where the earliest recorded conflict between Amish parents and State officials took place over schooling. Historically, the Ohio school district consolidation movement went back as far as 1910. By 1922, charges that  included parental neglect were brought because the Amish refused to continue to send their children to public school past the 8th grade. Some children were actually taken to an orphanage. This discontent reached a peak until a 1972 ruling the U.S. Supreme Court sided with the Amish on the grounds of religious liberty in the case of Wisconsin v. Yoder. Chief Justice Warren Burger wrote:

A State’s interest in universal education . . . is not totally free from balancing process when it impinges on other fundamental rights and interest, such as those specifically protected by the Free Exercise Clause of the First Amendment.”

The Amish first came to the area of what is present-day Somerset County in 1773, many of whom were my wife Susan’s ancestors. Coming to America originally from the Alsace region of Switzerland, Germany, and France as early as the late 1600s, they settled first in Germantown, north of Philadelphia, then in Berks, Lancaster, and other eastern Pennsylvania counties. Ironically, they later lived beside other Germans who had been recruited by the British to fight the Colonists in the Revolutionary War. The Americans offered these mercenaries from the Hesse-Kassel region 50 acres of farmland to change sides. They made up a quarter of Washington’s troops, and in the end, some 5,000 stayed in the New World. My wife’s Brenneman and Bender Amish had also come from Hesse, but of course were pacifists.

After entering Somerset County via the Forbes Road (U.S. Rt. 30) and Glades Pike (U.S. Rt. 31), only about a third stayed in the central area of Berlin-Brothersvalley with other religious migrants. Others went north to what is now Johnstown-Conemaugh Township, and the rest turned south to Meyersdale and the Casselman Valley. The Somerset County Amish are considered the second oldest such community in America. A smaller group settled slightly west of the Casselman, in Gortner, MD, and Preston County, WV. It’s from that later group that another of Susan’s several Miller ancestors came. Read about Grandma Catherine who married Thomas Lee, Sr. and moved back near Niverton. Still others continued west to Ohio, Indiana, Iowa, and beyond.

In Newport’s Niverton story, one of the main conflicts that took place across the Pennsylvania-Maryland border was whether children should be taught in Sunday schools. Heroine Clara has been given the gift of Bible storytelling, which she secretly shares with the Amish children despite the bann on such practices. Andrew’s secret “vice” is claiming an old Model T Ford automobile he found abandoned along a back country road. His parents had moved back East to Lancaster, leaving him alone on the family farm and often at odds with the church leadership. There are many more conflicts, physical, logistical, theological, and psychological to be resolved in “Meek and Mild,” and the results are rewarding. Without spoiling the resolutions, let’s just say, like an Amishman, that what happens in the end is “Gottes wille” – God’s will.

The Old Order Amish in the story followed a practice in the Ordnung, meaning “order” or “discipline.” One of the rules for their lifestyle was called “Shunning,” or Meidung in German. This was a bann, or exclusion brought about by some forbidden behavior by a church member. Recognized as sinful, the shunned party was excommunicated and could only be reinstated by confessing before the congregation. This practice was instituted by supposedly unanimous vote in 1895 by the Flag Run congregation and led to their separation from their Amish brethren in Maryland. The scriptural bases for the Amish practices and beliefs are available today online. 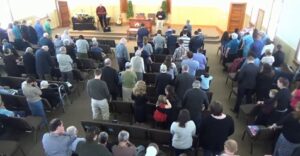 One of the aspects of the story is the author’s use of first names that come right out of my wife’s Somerset Amish past, like “Lizzie” and “Sadie.” Other characters with surnames approximating actual Amish families of the Casselman Valley include Kaufman, Lehman, Borntrager, Hershberger, King, Mast, Weaver, Hostetler, Esh, Brennerman, and more. Other Maryland meetinghouse names copying actual places include Cherry Glade and Maple Glen, where the annual convention of the present-day Casselman Historians is held. Both these congregations are now Conservative Mennonite churches. Today the Beachy Amish movement includes over 15,000 members in nearly 300 congregations in North American and around the world. Other followers of Jacob Amman comprise about 40 other types of practices. The book The Amish, by Kraybill, Johnston-Weiner, and Nolt, gives a good overview. You’ll also enjoy the Youtube video, The Amish: How they survive. It’s said that their numbers double every 20 years. They live and farm by Englishman John Heyword’s (1497-1580) motto, “Many hands make light work,” although as few as 20 percent are still engaged in farming. Many have found service work and manufacturing more profitable in supporting large families. 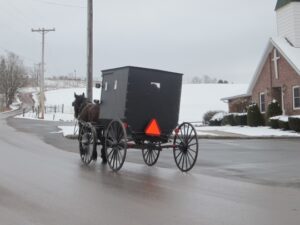 Finally, Newport gives generous credit to the following sources familiar to those with ties to the local Amish communities, although she admits to never having met the authors personally:

The Historian, a publication of the Casselman River Area Amish and Mennonite Historians, Grantsville, MD
– “History of the Amish Mennonites in the Forks of Garrett County, MD” (Oct. 2001) and
“Church History in the Summit Mills Area” (Jan. 1998) both by David I. Miller
– “The Preachers’ Tables” (Jan. 2004) by Joanna Miller

May I also recommend at least two other reads, if you like to learn about the Amish? The first is actually a series of three books by Dr. Erwin R. Stutzman (1953- ) of Harrisonburg, VA, called Return to Northkill. I have alluded to his accounts of our ancestors Hannes “Indian John” Miller and Jacob Hochstetler in an earlier article about the Hochstetler Massacre in Berks County of 1757. Stutzman’s first story is entitled “Jacob’s Choice” (2014), about the tragic Indian attack; the second is “Joseph’s Dilemma” (2015), about captivity among the Natives; and the third is “Christian’s Hope” (2016), the resolution and reunification of this Amish family.

At the 2019 meeting of the Casselman Historians, Susan and I had the privilege of meeting whom we’re sure is another distant cousin, Enos D. Stutzman, of London, Ohio. As we discussed various authors and writings about the Amish, Enos pulled out a book entitled, Second Chances, and announced, “This is my autobiography.” He was kind and generous enough to give us a copy. The read is delightful and enlightening, to say the least. He begins with his personal life and practices as a more conservative Amishman growing up in the late 1930s and early 40s and takes the reader through his transition to the Beachy Amish of today. The journey is eye-opening and enjoyable.

I’ve given you much to consider in this article, and I hope that you’ll have the chance to search online for explanations of the various, often complex, aspects of the Amish-Mennonite beliefs and practices over the years. Perhaps you can borrow or buy at least one or maybe all of our recommended books soon. Whether it be from online or the church or local library, you’ll arrive at a new understanding of our Anabaptist brethren.