Deaths in the Charles Krause Family – 2021 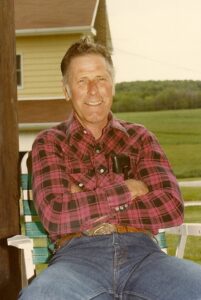 Krause, Lawrence E., “Larry,” 96, Richland Township went to be with the Lord on March 3, 2021 at Laurel View Village, Davidsville, PA. Born Dec. 24, 1924, in Salisbury, PA son of the late Charles F. and Annie (Lee) Krause. He was the youngest and last surviving of eight children. Also preceded in death by lovely wife, Lois J. (Sell), who died in 1996; brothers, Ernest (Mary), Harry (Alma), Floyd (Genevieve), Clyde (Jean), Ralph (Rachel), sisters, Olive Adams (Herbert), Hilda Miller (Richard) and friend, Alice Burk, who died in January of 2015. He is survived by his four sons, Barry (Debra), Johnstown; Timothy (Jean Ann), Plum Island, MA, Wayne, Johnstown, Thomas (Christine), Johnstown. Other survivors include 7 grandchildren and 13 great-grandchildren and numerous nieces and nephews. Larry was a native of Richland Township since 1946. He served in the US Navy during WWII in South Pacific. He was a partner in B & K Builders for 40 years and was a charter member of Belmont United Methodist Church, which he helped to build in 1951. He was also member of Johnstown Lodge 538, F&AM;. Larry loved gardening, outdoor sports of fishing and hunting, but golfing was his favorite. The family will receive friends from 10 a.m. until time of Funeral Service at Noon, Saturday, March 6, 2021, at Harris Funeral Home, 500 Cherry Lane, Richland, with Pastor Jean Smith officiating. Entombment, Richland Cemetery Mausoleum. In lieu of flowers, donations may be made to Belmont United Methodist Church, 107 Coldren St., Johnstown, PA 15904, or your favorite charity in memory of Larry Krause. Online condolences may be posted at www.wharrisfuneralhome.com. 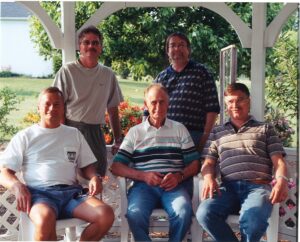 Memories of Our Uncle

Laurin said, “The obituary seemed like so little to say about a man who had lived 96 years and did so many things.” It’s enough, I guess, that we remember more than the few words of an obit. I never knew until we came back East in 1996 that he golfed with my uncle, George Hodge. We never laughed so hard as when Uncle Larry was talking about golfing with Uncle Clyde Krause, his brother, who was loud and didn’t follow any of the golf course rules. I think it was an embarrassing experience for him, but still makes me laugh and makes me think of Uncle Clyde, who was boisterous, but had a heart of gold. Wish I’d have written down what Uncle Larry said at the time, so I’d have the golfing story. Wish we hadn’t lost all the pictures I took of him when we were back in 2010. Our laptop went whacky and all those pictures I went out of my way to take, were gone. I knew he was selling his house and I made sure to take pictures of him out in his lovely yard and in his sun room and of he and Laurin everywhere he took us, and then – they were gone. I still grieve for those photographs, but can see some of them in my mind. Where did he take us for ice cream – was it The Cow? Something like that. Sitting on the bench together, the three of us eating our ice cream. Driving through, what can only be for me, the Presbyterian Farm, regardless of what it is now and Uncle Larry telling us stories as Aunt Hilda, his sister, had done when we were there in 1996.

We were always made welcome and we treasured our time spent with all of the Krause aunts and uncles. I think they were a special group of people, these Krause siblings, and the genealogist in me wishes we could have saved every bit of their knowledge and preserved all their stories, but that’s not possible. There’s never enough time.

Susan and I may have been the only persons in the family who called him by his given name, “Lawrence.” I guess that’s because my given name is “Larry” and we didn’t want to confuse anyone. I’ll call him Lawrence here. Probably my first and most lasting memory of him was from 1975, when Susan and I, married 4 1/2 years, decided to build a house. We never even consulted anyone else but B & K Builders. I remember taking one of those plans from the weekend newspaper for a really fancy place into him. He just smiled and said something to the effect, “I can build a much less expensive home that is more practical and will last a lifetime.” He even pointed us to some like it nearby that he had built. Long story short is that Susan and I have been in our Krause house for 45 years and are still very happy. Lawrence listened to us each time we had a question or suggestion, and we got along just fine. One image that still comes to mind from October of that year was Lawrence’s sons Tom and Wayne, who worked for the company then, down on their hands and knees finishing the cement in the basement right up til dark one night. I don’t think that floor today has any cracks in it. Maybe the best part was when Lawrence handed us the key for our new house along with a check for $700. I asked, “What this?” and he smiled saying, “Oh, that’s money left over. Go buy yourself some carpet for the living room.” That was so Lawrence, kind and generous, and may I say that the money covered the living room, dining room, and front stairs, including labor. We still have the carpet in our house today.

The last thing I want to say about Lawrence, as a family historian, is his experience with people of various faiths. His mother came from the Somerset County Amish tradition. His father was from German-speaking Lutheran stock in Northern Maryland. At age four the family moved to what was known as “The Presbyterian Farm,” now Pine Springs Camp, in Jennerstown. While his dad, the caretaker, didn’t always agree with those Calvinists from Johnstown, together they kept things running smoothly until the Krauses bought their own farm on the other side of town. In the many years that Lawrence ran his own construction firm, he built new churches for the Latter Day Christians in Richland, the Methodists in Belmont, and I’m sure others. That amazes me – the tolerance he had for religious diversity. I’m sure he must be drawing up plans for God in Heaven right now.

You may share your memories of Larry Krause with our readers by writing in the comments box below or sending them directly to me at [email protected]  . Read more about Lawrence and his family by inserting and clicking on names in the “Search” box located in upper right-hand corner at this site. Click here to see last year’s deaths (2020) in our family. These are the Vitals of Charles F. & Annie (Lee) Krause.

2 Responses to Deaths in the Charles Krause Family – 2021