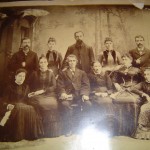 Children: (some dates not known)

* The 1909 obituary for daughter Susan refers to surviving sisters as Amanda, whom we have identified, and Mrs. E.L. Yoder and Mrs. S.J. Plank, both of Iowa. We assume they are Mary and Rebecca, who survived their mother. Note that one of Susan’s sons, Earl, emigrated to Iowa as a teenager after his mother remarried. Sister Martha was said to have “made her home with Mrs. Keim.”

RETURN TO OUR BOWMAN FAMILY TREE

RETURN TO OUR BERKEY FAMILY TREE