Recently, in interpreting and posting the Will of my 4XGreat-grandfather Thomas Austen (1740-1801), I gave credit for the transcription to a “distant” cousin out in Seattle who had been very helpful in locating not only that but other priceless documents. Caroline Pinkers (1931-2014) was the niece of the late Dr. Willard Austen of New York, who was an ear, nose, and throat specialist and avid amateur genealogist. She passed along much of his research, done in London, including the story of the 1813 double wedding between an Austen brother and sister and a Pearce sister and brother. She was also instrumental in my posting the history of our Austens of Kent nearly two decades ago. Another encounter with Caroline was e-mailing back and forth regarding the “Original Family Narrative” of our Pearces and Austens. Following that was her acquainting me with another take on our common heritage by yet another distant, but dearly departed cousin, Fred A. Tice (1891-1977) . So, in my recent research I wondered what had become of cousin Caroline. In Googling her by name I discovered the sad news that she had passed away a few years ago. After re-reading her early e-mails, I wondered what she had meant when she said that she would get back to me after her “horse show” activities were over. The following online tribute answered that question for me, and so I present the following, originally published by her friends at the U.S. Dressage Federation and The Equestrians Institute: 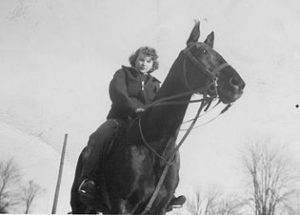 A young Caroline Pinkers on “Melody”

Our local equestrian community lost a very wonderful person on December 7, 2014 when Caroline Pinkers, born Caroline Nichols, passed away.  Caroline was born on January 1st, 1931 and began to ride at Hutchinson Farms in Scarsdale, New York.  Soon, she was a Riding Counselor at Summer Camp. In 1949, she received her Equitation Certificate from Southern Seminary, Buena Vista, West Virginia.  She often rode in regional hunts.

Caroline married Lothar Pinkers in 1954.  She first worked at Washington University Library, then as the department secretary for the Bacteriology Department at Washington University Dental School in St. Louis, Missouri. Caroline went on to work as a Record Librarian at St. Luke’s Hospital. Lothar’s medical internship took the young couple to Colorado, where Caroline worked at St. Anthony’s Hospital outside of Denver. When Lothar was made chief of the Denver Federal Center Health Clinic in 1957, they started a family. Lothar’s residency at Virginia Mason Medical Center brought the family to Seattle. Their family grew to include four children – son Arthur and daughters Beth, Christie, and Diane. Caroline enjoyed being a stay-at-home mother during this time.  In 1983, the family added a horse — Get’s Spellbinder was purchased for daughter Diane and a “horse show mother” was born!

From 1998 through 2010, Caroline and Lothar worked with Equestrians Institute and the USDF Region 6 Championships.  She ran the Awards Desk and was a driving force behind the scenes for many E.I. shows over the years. Caroline was ingenious in the show office – one of her brilliant innovations was a paper system to devise the complicated ride schedule for multiple show rings over multiple day dressage shows. With the best cursive penmanship around, she wrote instructions for everyone to follow when she started handing off some of her duties to other volunteers.  Caroline took special care of the award ribbons; she organized them beautifully, wanting each ribbon to hang straight and smooth on the peg-board.  She was a perfectionist and a very hard worker, devoting many months each year to putting on these wonderful shows.

Caroline Pinkers was a driving force in the horse community and her passion and volunteerism has benefited equestrians in Region 6 and beyond. She will be greatly missed.

Caroline’s favorite charity was the Washington State Horse Park, and her friends suggested that a memorial gift there would keep her spirit alive.

Through the same recent researching of Thomas Austen’s Will, I also learned of the death of another dear cousin, so instrumental in my early Pearce-Austen genealogy, Marjory Austen (1932-2009) a decade ago. If I recall correctly, Marge had seen an early version of my webpage online and e-mailed to give me some “details” on our common Austen family, despite the fact that she was an Austen only by marriage. Well, those details led to introductions to more cousins, including the above Caroline Pinkers; trips to Ohio to meet her and see some of the old Pearce-Austen stomping grounds; and a chance to read her autobiography, “You Can’t do That!” (Memoirs from Early Childhood to Mid-Life). What an amazing woman, so full of life and an eagerness to share all that she had experienced. I can’t imagine hosting a family history website today without her valuable input back in those early days. Oh, and did I mention our common love of music and teaching? To think that she rose to the position of public school Superintendent, just like my late beloved Uncle Dale Pearce , who managed several districts in Pennsylvania and got me started on genealogy by giving me that “Original Pearce-Austen Family Narrative” before he died in 1981. Below is Marjory’s obituary from her local Wooster, Ohio, newspaper, The Daily Record: 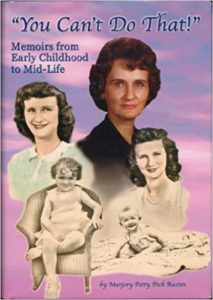 Marjory Peck Austen, formerly of Ashland and Shreve, died in Texas on Dec. 31, 2009. She was born on Dec. 26, 1932, to Alva M. and Lela V. Petty in Somerset. Marjory graduated from Ashland High School in 1950. She also graduated with honors from Ashland College in 1967 and went on to attain a master’s degree in music therapy from the University of Akron in 1975. She began her teaching career in the Loudonville-Perrysville School District, where she was employed as a music teacher and choir director. Marjory later became a superintendent of schools in Seneca County, Ohio, as well as Houston, Texas, from which she retired. She married Thomas Austen on Jan. 1, 1977. He survives in Porter, Texas. She is survived locally by her children, William (Julia) Peck of Perrysville, Marcia (Fred) Hosfeld and Laura (David) Preston, both of Wooster; six stepchildren; eight grandchildren; seven great-grandchildren; a step-great-grandchild, as well as two nieces and a nephew of the Perrysville area. She was preceded by her parents; a son Robert; and two brothers. At her request, her body has been donated to medical science. Memorial contributions may be made by mail to: Arthritis Foundation, Northeastern Ohio Chapter, 4630 Richmond Road, Suite 240, Cleveland, OH 44128. A memorial service will be planned for a later date at the convenience of the family.

Cousin Marge was one of my primary inspirations for researching, writing, and posting family history, especially my Pearce-Austen and associated families. She constantly contributed to the collections I have shared with others via the internet over the years. One of my favorite pieces is called “Putting Flesh on Bones.” I hope you’ll take a moment to read it and remember Marge. As she was to me, I hope I can be an inspiration and example to others.

It’s unfortunate that we sometimes get so involved in our work and lives that we forget to “keep up” with loved ones and associates. Thank heavens for the internet, where we can go when we are reminded of these important people and wonder what’s become of them. We haven’t forgotten you, Caroline and Marge. In the future, I want to post memories of other folks instrumental in my life, especially as they have added to my love of family history.