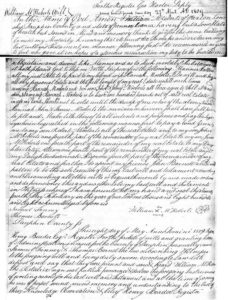 In the name of God. Amen. I, William McRoberts of Paxton Township, Dauphin County and State of Pennsylvania, having but a low state of health but sound in mind and memory thanks to God for the same, calling to mind of my mortality, knowing that all must die, do make and or claim my last will and testament in manner following:

First, I do recommend my soul to God, who gave it in hopes of a glorious resurrection, my body to be buried in a Christian and decent-like manner, and as to such worldly substance as it hath pleased God to bless me with, I dispose of in the following manner:

I allow all my just debts to be paid to my beloved wife Hannah McRoberts. I do will and beget all my personal estate and the full benefit of my real estate until such times as my wife Hannah McRoberts and two sons, John and James McRoberts, all three agree to sell it. And when sold, my wife Hannah McRoberts is to have one-hundred pounds out of said real estate. In case my land should not be sold until the decease of one or two of the above named, Hannah, John, and James McRoberts, the survivors or heirs (?) shall have full (unclear?) to fill and make title thereof to all indents and purposes and pay the legacies (?) herein bequeathed in the following manner:

Fourth day, February, in the year of Our Lord, one-thousand eight-hundred and eight

This eighth day of May, Anno Domini 1809, before Henry Bender, Esq., Register for the Probate of Wills and Granting Letters of Administration in and for the County of Dauphin, personally came Samuel Finney and Thomas Barnett, the two subscribing witnesses to the foregoing will, and being duly sworn according to law, doth dispose and say that they were present and saw and heard William McRoberts, the Testatrix, sign, seal, publish, pronounce and declare the foregoing instrument of writing as and for his last will and testament, and at the time of so doing, he was of perfect sound mind, memory, and understanding to the best of their knowledge, observation, and belief. 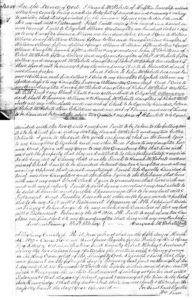 (No. 249) In the name of God, I Hannah McRoberts of Mifflin Township, (word?) Allegheny County, being weak in body but of sound mind and memory, and calling (?) to mind that it is appointed for the human species once to die, I do make this my last will and testament.

And I leave to John McRoberts’ two sons, James and William, each five dollars, and I leave to my daughter, Elizabeth Allison, my spotted dress, and to my daughter Susannah Allison, my green dress. And I give to my granddaughter Hannah McRoberts, daughter of Robert McRoberts, my black silk dress, and my black shawl and one yellow shawl to Elizabeth Allison, and one dark shawl to Susannah Allison, and to Hannah McRoberts, daughter of Robert McRoberts, all my other shawls, and one web of cheek (?) to be equally divided between the Robert McRoberts’ three children, and one web of flaxen (?) and one web of linen to be divided between the above two girls, and one pair of blankets to be equally divided with the two girls, and one piece I will to be taken to the fulling mill and to be dress (?) for a riding coat for Hannah McRoberts, and my two cotton petticoats I give to the said two girls, one piece of cheek (?) in the trunk I give to my daughter Elizabeth, and one other piece I give to my daughter Susannah. And I give my yarn to my two granddaughters that live with me, and all the property that they are entitled to by their father’s estate. And my side saddle, and one set of china (?) that is in the trunk to Hannah McRoberts, and one piece of cheak (?) I will to be divided between my two daughters, and all my wearing apparel that is not mentioned, I wish to be equally divided between my two daughters, and the settler (?) I give to the children the live with me. And my new black clock I give to my grandson that lives with me, and all my property I will to be sold by my executors, and my real estate to be sold likewise.

A.B. (?) I will to each of my the daughters my fine sheet, and to my granddaughter that lives with me my umbrella (?).

Allegheny Couny, Pa. Be it remembered that on the fifth day of March A.D. 1812 – came before me, Saml. Jones, Register for the Probate of Wills and Granting Letters of Administration for A. County, Robert Ritchey and Andrew Finney, the two subscribing witnesses, the entire will, and being sworn on the Holy Evangelist of the Almighty God, deposeth and saith that they were present on the fifth day of February last past on the night of that day and did see Hannah Mcoberts, the Testator, within named, sign, seal. publish, and pronounce the written instrument of writing as and for her last will and testament and that she was of sound mind and memory at the time to the best of their knowledge and that they subscribed their names thereto and witnesses. Witness my hand the day and year aforesaid.

Questions arising from these documents:

If any of our readers have answers or suggestions, please forward them in the comment section below and we will research your ideas. Thank you.

And thanks to cousin James Paxton for contributing these documents