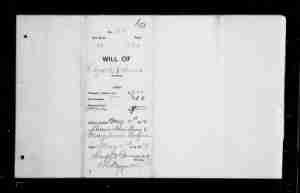 (Typewritten and witnessed by signatures at the bottom of each page)

I, Elizabeth K. Norris (widow) of the City of Pittsburgh, County of Allegheny, and State of Pennsylvania, being of sound mind, memory, and understanding, and feeling that life is at all time uncertain, do make, publish, and declare this my last will and testament, hereby revoking and making void all former wills by me at any time heretofore made.

First, I direct that all my just debts and funeral expenses be fully paid by my Executors hereinafter named, within one year after my decease.

Second, I direct that my body be buried in the Cemetery at Bull Creek Church, West Deer Township, Allegheny County, Pennsylvania, beside other members of my family. I further direct my Executors hereinafter named, within six months after my decease, to erect over my grave a marker or tombstone to cost no less than One Hundred ($100) dollars. [Time value of money $2,770 in 2017]

Third, I give and bequeath unto the Trustees of the Bull Creek Church of West Deer Township, Allegheny County, Pennsylvania, and their successors, the sum of One Hundred ($100) in trust to invest the same, and to apply the income therefrom each year to the care and preservation of the grave of myself and family in the Cemetery of said church.

Fourth, All the rest and residue of my personal estate I give and bequeath unto my daughters, Annie N. Gray and Mary N Bryce, their heirs and assigns, share and share alike.

Fifth, I give, devise and bequeath unto my daughter, Annie Norris Gray, all that part of my farm situated in West Deer Township, Allegheny County, Pennsylvania, on the Northwest side of the Pittsburgh Road, and bounded by lands of Henry Davidson, Clark Carnahan, George Wilson Hazelett, and the aforementioned said Pittsburgh Road, my said daughter to have the full use, benefit, and control of said property, and full, complete, and absolute power to sell and dispose of the same or any part thereof at any time for such price or prices and upon such terms as she may deem proper, and to make, execute, acknowledge, and deliver a deed of deeds conveying the same in fee simple, or for less estate, and the proceeds of such sale freely use, expend, or dispose of as she may deem proper, but in case my said daughter Annie Norris Gray shall not dispose of said property in her lifetime, then the same, or so much thereof as may remain unsold shall go to and vest in the children of my said daughter, Annie Norris Gray, their heirs, and assigns, share and share alike. Robert Patterson Gray, the husband of my said daughter, Annie Norris Gray, is otherwise fully provided for which is the only reason that I dispose of said portion of my said farm in the manner aforesaid.

Sixth, I give, devise, and bequeath unto my daughter Mary Norris Bryce [widow], her heirs and assigns, all that part of my said farm in West Deer Township, Allegheny County, Pennsylvania, situated on the Southeast side of the Pittsburgh Road, and bounded by lands of Henry Davidson, Hugh McCutcheon, James E. Hazelett, John K. Hazelett, and the aforesaid Pittsburgh Road.

Seventh, I nominate, constitute, and appoint my said daughters, Annie Norris Gray and Mary Norris Bryce, Executrices of this my last will and testament.

In Witness Whereof I have hereunto set my hand and seal the twenty-second day of November, A.D. nineteen hundred and five.

Signed, sealed, publish, and declare by the above named Elizabeth K. Norris, as and for her last will and testament in the presence of us who have hereunto subscribed our names at her request as witnesses thereto, in the presence of the said testatrix.

(Handwritten at bottom of page three)

I, Elizabeth K. Norris, do hereby make this codicil to my foregoing last will and testament bearing date of 22nd day of November, A.D. 1905, hereby confirming all other parts of my said will except paragraph five, which I revoke and in lieu thereof I give my daughter, Annie Norris Gray, out of my personal estate the sum of Three Thousand Five Hundred ($3,500) dollars for her sole and separate use and free from any control of her husband. [TVM $93,500 in 2017]

All the rest, residue, and remainder of my personal estate, after the payments made out and therefrom of my just debt, funeral expenses, and other outlays provided for in my will, I give and bequeath to my daughter, Mary Norris Bryce.

In witness whereof I, Elizabeth K. Norris, have hereunto set my hand and seal this 3rd day of June, 1911