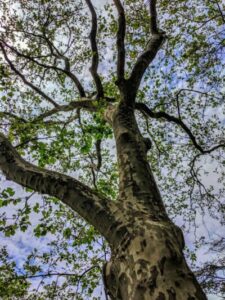 My wife Susan and I are involved in our Assistant Pastor Scott’s doctoral program along with other fellow St. Paul’s EPC members. His webpage, ThinkingOutdoors.org , gives the rationale and instructions for submitting what he calls “meditations” on personal reflections with nature as part of our faith journey. When Susan stumbled upon biblical references to the sycamore tree as part of her writing about God’s creation of trees in our lives, I knew I had to expand on this specific idea.

Back in the spring of 2006 the PA Department of Transportation, as part of upgrading the Somerset Pike that runs past our house, decided it was necessary to remove most of the 100-year old sycamores along this stretch of highway. The dozens of stately trees, some with trunks 4-feet across and 50-feet high, were planted after World War I as a tribute to the soldiers who served. The roadway then was narrower to accommodate the smaller cars of the 1920s so the trees were planted just off the right-of-way. As cars and trucks got bigger over the century so the pavement got wider and closer to the ever-growing giants.

My involvement began with a letter-to-the editor of the Johnstown paper asking PennDot to reconsider their plan to eliminate most of the Sycamores to keep careless drivers from crashing into them. After several meetings with the State and enlisting other concerned citizens on both sides of the issue, we reached a compromise to only cut down the most threatening trees, the ones growing too close to the right-of-way, on curves, and of course diseased and dying plants. Some neighbors had thought we should have saved all the trees while others were committed to cutting them all down: “tree huggers” versus “tree haters,” if you will. In the end, by this time, I’m sure that all has been forgotten, but I wonder what will happen the next time the Somerset Pike is “improved.” If I’m dead or gone, will someone take my place? Will cooler heads prevail?

Susan and I have at least a half-dozen giant Sycamores along our property front, one 30-footer that came up from seed along our driveway, and a 3-foot “baby” nearby that we protect as if our lives depended upon it. Imagine my surprise when Susan read from an internet source that the largest Sycamore in the country is still growing in, Jeromesville, OH, where my great-great-great grandfather settled after coming for England. He and several of my family are buried there. 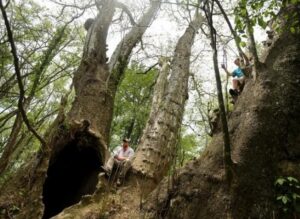 Other not-so-trivial information says that a sycamore tree was toppled on 9/11 in New York City, but it’s beaches protected that other St. Paul’s church there from the ash and debris that emanated from the World Trade Centers. Did you know that sycamore seeds accompanied the astronauts on a space mission, part of which was an experiment to determine the effect of weightlessness and radiation on such entities.

This meditation reminds me of how God used the mighty sycamore tree in scripture to show mankind’s relationship to other parts of His creation. Zaccheus “climbed up into a sycamore tree” to see Jesus. Zaccheus was “small in stature,” but Jesus, seeing him, commanded that he “come down, for today I must stay at your house.” In the end Zaccheus found salvation and offered Jesus’ ministry half of his possessions. (Luke 19:4-10)

The Old Testament compares the number of priceless cedar trees that were used to build Jerusalem by King Solomon to the common sycamore trees found nearby. (2 Chronicles 1:15) Before that King David had appointed men to various jobs and to protect the valuables in the realm, including the “olive and sycamore tree.” (I Chronicles 27:28). The Olive trees produced oil and the sycamore wood was used for building and burning, and the tree provided edible  figs. In fact, the book of Psalms relates such a valuable tree as used by God to inflict punishment during the Egyptian plagues when frost killed them. (Psalms 78:47) These sycamores could not even stand the colder temperatures in the mountains. I’m glad our trees are hearty enough to survive the snows of a century of winters in Western Pennsylvania.

Thanks to Susan for her research and giving me such sources of inspiration. Each time I see a sycamore tree I’m reminded of our connection to God and this part of His glorious, timeless, and yet practical creation. Pastor Scott has asked us to write seven meditations on our faith and nature for his project. Please look for my additional compositions at this site as well as Susan’s contributions.