Quaker Meeting to Help Victims of the Hochstetler Massacre, 1757 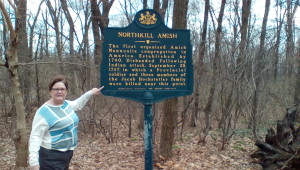 In italics below is the Maiden Creek, PA, Quaker meeting record of October 27, 1757, written less than a month after the September 29th Indian attack on the settlers of Berks County. The printed information atop the copy of the original document is unfortunately incorrect, done by someone else. None of the names listed below  are believed to have been Susan’s Amish ancestors, but the action of the Society then was representative of the need to assist fellow members of the Quaker community there [punctuation & caps as recorded]:

“The cases of Sunday Friends, Members of this Meeting, who have left their Habitations on account of the Indiana Enemies, coming under consideration, it appears (by information of divers Friends now Present) that some Assistance would be very acceptable to them at this time, as they are not well able to Provide necessaries sufficient for the Support of themselves and Families through the approaching Winter.

Their Names and Numbers are, vizt. [British for namely]
Richard Stephens (a lame man), his wife & seven children.
Thomas Willits and Wife, both ancient.
Thomas Ellis jur [from the Latin “to swear” or “junior”?], his Wife, and six children, all small, &
Joseph Yarnall, his Wife, and three Daughters likewise small.

“As you are authorized by the Yearly Meeting ‘To Hear and to Consider the cases of any Friends under sufferings, especially such who suffer from the Indians or other Enemies, and to administer such Relief as you find necessary,” We recommend the above Friends to your Notice.

“We believe that besides the Plantations which Richard Stephens, Thomas Willits and Thomas Ellis jur have left behind them, they are not Possessed of much more than would Pay their just Debts, and we are informed that Joseph Yarnall hath not wherewith to Pay his Debts.

We remain with the Salutation of Brotherly love. Your affectionate Friends.

Signed by order and on Behalf of the said Meeting by

Monthly Quaker, or the Religious Society of Friends, meetings rotated between Exeter (Oley), Maiden Creek, and Reading, PA, at that time. The famous Hochstetler Massacre occurred just 12 miles away at the Northkill Amish settlement. For details of the event, read the story of Hannes “Indian John” Miller.