Before, During, & After the World Wars: Hill & Moon Family Letters & Cards, Part V

Transcribed with [Comments]
by
Larry Pearce, great-grandson
with memories from
Grace TeSelle, granddaughter
2/6/21

Here we are, 1946. The War is over. The men are returning home. Soon life will be back to normal, not unlike the hope all Americans have now as the Covid Pandemic seems to be coming under control with the introduction of vaccines. But my Great-grandmother Alice (Moon) Hill’s life was filled with uncertainty. Her husband Joe has died, and their son Harry, who had run the family farm, was also gone. Where would Alice live? What would become of her possessions? In what may have been her final letter to family she expresses her concerns while at the same time transmitting positive neighborhood and family news to her beloved daughter Myra. Read long with me one final time in this series to find out what an loving example she was to all. 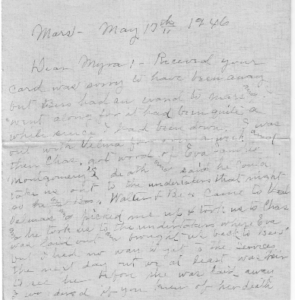 Dear Myra: Received your card. Was sorry to have been away, but Bess had an errand to Mars and I went along for it had been quite awhile since I had been down. I was out with Velma for over a week and then Chas. got word of Eva Sample Montgomery’s death and said he could take us out to the undertakers that night. Walter & Bess came to Velma’s and picked me up & took us to Chas. and he took us to the undertakers where Eva was laid out and brought us back to Bess’s, but I had no way to get to the services the next day, but we at least was there to see her before she was laid away. Wondered it you knew of her death or was at her funeral.
I expect Clarence Sample’s will move into her house as the place they were living in has been sold and they have to move.

[Comments: Lots of familiar names in this, our final family communication in this series. I’m not certain where or with whom Great-grandmother was living on any given year before her death, but cousin Grace says Alice did live for a time with “Bess,” her oldest daughter and my Grandmother Bessie (Hill) Pearce (1887-1974). The choice to go to “Mars” is interesting to me because, growing up in nearby Middlesex Township, my family too did their shopping there. She must have dropped this letter in the post office there. In an earlier article, I found that many of our farmer Hills spent their money in the small town of Valencia, about as far the other direction off of Three Degree Road. Many of Alice’s cards and letter carried the Valencia postmark.

[We said earlier that since the deaths of her husband Joe and family farm-caretaker son Harry, the aging Alice spent a great deal of time with other close relatives. The “Velma” she refers to, with whom she stayed, was Bess’s sister Mayme (Hill) Crummy’s daughter, a granddaughter. Her last name was Truver. I’m told that she had eloped with husband Homer at a very young age. “Chas” was no doubt Alice’s youngest son Charles (1898-1980). I wrote earlier that Eva Sample was Alice’s younger sister Hopie’s daughter who had married a Montgomery. Was Clarence Sample a brother or a son to Eva? We are fairly sure that “Walt” was Bess’s oldest son Walter Pearce (1911-1997). He had married and built a house on the corner of Bess and Wesley’s farm. A hard working man, he held several interesting jobs, from installing fencing at North Park to enclose a buffalo herd imported from the American West to digging in the Wildwood mine, which Grace says may have stretched under his grandparents Joe and Alice’s farm.]

I guess you know the farm has been sold and I do not know what plans are as I have nothing to say about anything. I do not have to be asked.

There was another church wedding at Cross Roads Sat. eve, the daughter of the janitors (Mrs. Sims). She married a retired serviceman that she had met in Washington.

[Comments: Not many words here, but perhaps a deep look into the uncertainty in Alice’s life. After her husband Joe had died and son Harry, who had taken over for his father on the farm, got sick and died, Alice was assured that she would have a place to live in the old farmhouse. Grace and I have described that arrangement earlier. She must have felt helpless, but assured daughter Myra that “she (Alice) had nothing to say about anything” and that she “did not have to be asked.” Because of her advancing age and perhaps the chance to sell the farm without conditions, Alice found herself living with others in the family, most notably daughter Mayme near Pittsburgh (see Part III) and Bess. Alice died the following year from when this letter was written. Myra was her youngest daughter and surely a comfort to communicate with. I continue to search for additional letters between Alice and others. She closes this portion with happy news of a marriage at the family church.]

I believe we had quite a drive in a new car yesterday. Ralph bought a new Plymouth. Is very comfortable. We went to see Beulah at Allison Park. [Her] boy had served I think three years in the drum, one in the heavy [?]. I do not know for sure and I saw the odds & ends that Beulah sells for her living. Quite interesting. I think there’s something of everything. Then we stopped at Portia McClintock’s sister’s place (Mrs. English’s). Saw Portia. had quite a nice visit.

[Comments: I was informed by my brother Paul that our father Ralph used his younger brother Dale’s post-war military automobile stipend to purchase a grey Plymouth for about $600. As we said earlier, our dad had spent the war years atop telephone poles in rural parts of northern Allegheny and southern Butler Counties on a deferment splicing cables together in all kinds of weather so that farmers could have phone service. Meanwhile, his brother Dale came home from the War to his new wife, began a family, and took up teaching where he had left off.

[Unfortunately, we don’t have exact information on who “Beulah” was, but my cousin Joyce remembers a Beulah associated with the Datt family, and a search of that name revealed a mention in an interview I did with my father Ralph 20 years ago. That Beulah was his cousin and playmate growing up at Pearce Mill. His Uncle Charles, named after Dad’s grandfather, had married Edith Datt, and their daughter was Beulah. Nor do we know what Alice’s reference to “the drum” could have been. Probably “Portia” and the rest were neighbors, but we’ll continue to search for information and put it in here if it becomes available.]

I was wondering if it would be possible for me to get two or three rooms in your town or someplace, for I suppose I will have to take them out of the house when the sale is completed. I do not know how soon they have to give up possession.

Have Nettie & Jim got their house in living condition yet? I sure hope they are getting tired of not being [illegible], but all things take time. I had rather planned to go see how they’re doing without tonsils. Went, but had to go as the rest went. So you can let me know how they are. I am as ever, Mother [postscript] Must get this in the mail. [End of the letter]

[Comments: Alice concludes her letter with an almost pleading tone: “I was wondering if it would be possible . . . or someplace, for I suppose . . .” Still, Alice seems to face reality, saying, “I do not know.”] As usual, Alice shows her loving concern for family, in this case granddaughter, Myra’s daughter Nettie and husband Jim, who were in the process of remodeling their house. She encourages Myra by saying, “All things take time.” She even shows a bit of humor with, “I had rather planned to go see how they’re doing without tonsils.” I’m told that it wasn’t unusual in those days for husbands and wives or brothers and sisters to have their tonsils out at the same time, perhaps to comfort one another. What does she mean with, “Went, but had to go as the rest went”? As the tonsils went? or wanted to live with them but my ride was leaving?]

This concludes my collection of letters and postcards from before, during, and after the World Wars, 1932 through 1946. My Great-grandmother Alice (Moon) Hill has certainly provided insight into those earlier times: family history, indeed national and local history, with a touch of humor and perhaps sarcasm, not unlike one might find today amid family discourse. As I’ve said, I’m amazed at how much the problems, economic and political, were similar then to today. As Grandma faced the deaths of her husband, the young men who had been sent off to war, and indeed friends and other members of her family, she did so with grace and dignity. These cards and letters are a testimony to her love and concern for those around her. We hope that in preserving these personal communications we also continue her legacy. Please refer others to this work and feel free to offer your comments and responses below.

Return to Part III – A Letter From Wintry West View, 1945