Before, During, & After the World Wars: Hill-Moon Families Letters & Cards, Pt. II

Transcribed with [Comments]
by
Larry Pearce, great-grandson
with memories from
Grace TeSelle, granddaughter
2/4/21 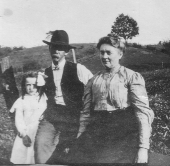 As I stated in Part I, years ago I inherited a folder of old family correspondence involving relatives I had only heard of. If you’re like me, you could almost hear my Great-grandmother Alice’s voice as she shared concerns with her daughter Myra over family medical problems, the death of a friend, and the “due dates” of several young realtives, among other things. In the postcards that follow, we’ll again hear Alice’s words to her daughter about plans to move. Alice’s Aunt “Turie” Moon writes about funeral plans after  the death of her brother Sam, Alice’s uncle, in Kansas. Alice then passes these along to Myra. 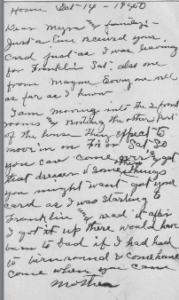 Dear Myra and family, Just a line, received your card just as I was leaving for Franklin Sat. Also one from Mayme. Everyone well, as far as I know. I am moving into the two front rooms and renting the other part of the house. They expect to move in on Fri or Sat, so you can come over and get that dresser & some other things you might want. Got your card as I was starting to Franklin and read it after I got up there. Would have been too bad if I had had to turn around & come home. Come when you can. [signed] Mother [end of card #1]

[Comments: Handwritten with some questions. These cards each were postmarked with an imprinted one-cent stamp. We believe Mother Alice was allowed to stay in the farmhouse after her husband Joe died the year before. Myra’s older brother Harry (1891-1945) and family ran the farm and occupied another house. We don’t know who rented the rest of Alice’s house, but Grace recalls that it was a family of five (more in the next part). The repeated reference to Franklin, PA, no doubt refers to a visit to see her Moon and associated families. I wonder why Alice felt she would have had to “turn around & come home” if she had read Myra’s card on the way to Franklin. Our commentator Grace wonders how Alice would have gotten to Franklin, at least a hour’s drive north. Her son Harry? More likely, she says, husband Joe, who had a 1928 Buick. he used to take the family around in it to visit family and friends – when there were too many to fit in the farm truck. ] 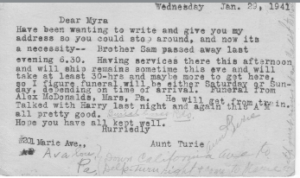 Dear Myra, Have been wanting to write and give you my address so you could stop around, and now it’s a necessity – Brother Sam passed away last evening, 6:30. Having services there this afternoon and will ship remains sometime this eve and will take at least 30 hours and maybe more to get here. so I figure funeral will be either Saturday or Sunday, depending on time of arrival. Funeral from Alex McDonalds, Mars, PA. He will get from train.
Talked with Harry [Hill, Myra’s brother?] last night and again this AM. All pretty good. Hope you all have kept well. Hurriedly,
Aunt Turie
#201 Marie Ave.
[signed in pencil and followed by probable handwritten directions: hard to read] [end of card #2]

[Comments: typed in abbreviated, run-on style. Myra (Hill) Miller (1899-1978) was the youngest child of Joseph & Alice (Moon) Hill and mother of cousins Nettie and Alice mentioned above. Aunt “Turie” Moon (1877-1943) (short for “Keturah,” first found as far back as the 1700s in the Moon-Davis families) was apparently not married and was an  older sister to the deceased, Samuel Edmond Moon (1887-1941) of Manhattan, KS. He was buried with many other Moons in the Cross Roads Cemetery, Pine Twp., PA, after viewing and service at the McDonald Funeral Home in nearby Mars. Most of my family has been buried out of that mortuary. She closes with a comment about talking to Myra’s brother, Harry twice. This seems like it was a telephone call. Grace, although “quite small in the 30s, remembers that her grandfather Joe had a phone for his insurance business (see below regarding phone service in those days in rural Pennsylvania). When she says, “All pretty good,” was it about his health as she hopes Myra has “kept well”?] 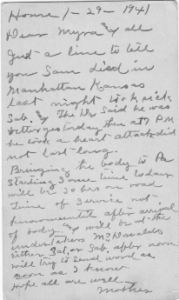 Dear Myra and all, Just a line to tell you Sam died in Manhattan, Kansas last night. Took sick sud[denly], and the doctor said he was sitting yesterday, then at 7 PM he took a heart attack – did not last long. Bringing the body to PA starting sometime today. Will be 20 hrs. on road. Time of service not known until after arrival of body and will be at undertakers McDonalds either Sat. or Sun afternoon. Will try to send word as soon as I know. Hope all are well, [signed] Mother [end of card #3]

[Comments: This card duplicates what Aunt Turie wrote to Myra on the same day. But, unlike hers, it is handwritten. It uses the typical abbreviated style for postcards, offering very similar, limited information. We wonder when telephone service was available in either or both northern Allegheny and southern Butler Counties that would have made such communication easier and instantaneous. My father Ralph, mentioned above,  received a deferment from serving in WW II as he served with the North Pittsburgh Telephone Company, founded in 1906. He was a lineman, splicing cables and establishing phone lines to rural areas.]

In conclusion, you have read the actual postcards announcing several plans: Alice’s plan to move and the family’s plan to bring her Uncle Samuel Moon home from Kansas for a funeral after several his death. You are invited to read the rest of our discoveries through the links below. I assure you that I continue to look for additional communications among our families from this time period. Each one uncovered sheds light on the happenings of those days, and they certainly will be transcribed, researched, and shared with you via posting on this page.

Return to Part I – A Letter from Mother Alice to Daughter Myra, 1932