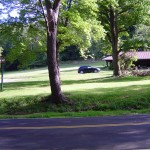 North Park grove dedicated to & on the site of our Moon family farm, Allegheny Co.

Of all the family roots extending back to the British Isles, the Moon branch has the potential to be possibly the most interesting. In less than 80 years we have British sailing ships and Royal Generals, men committing treason to fight for the American colonialists and conceiving children late into their 70’s, and if that’s not enough, a patriarch who owned a tavern on the Western Pennsylvania frontier. Unfortunately, the facts are hard to come by and many of the dates don’t agree. Even with published obituaries and austere organizations such as the Daughters of the Revolution, we may still be missing an entire generation. But, when these family pioneers, namely Henry and Sarah, live to be 107 and 99 respectively, who knows what they’re capable of! After a look at our genealogical line, the next article, “The Mystery of Henry Moon,” will look in detail at the lives of these ancestors through the research of several Internet associates. This introduction and that article about Henry should both be considered, perhaps with a grain of salt, to get at least a partial story of our Moon family in America. We’ll travel back in time to the early 18th century and review what information we have. We’ll investigate some interesting sidelights: Did one of our own marry into a family whose favorite son ran for the Presidency of the United States? Do we have a township in Western Pennsylvania named after us? And more. But this piece is only intended to be an introduction to this branch of our family. So, after a brief look at the surname and a list of famous Moons, we’ll list some websites to visit for more information. We’ll consider the family motto and Coat of Arms.

At last count, the surname “Moon” was ranked 776th in the United States, which makes it about average as family monikers go, with about 55,000 members. The Cornish [western coast of England] word “Mon” means “thin,” but the Irish phrase “O Mochain” means “early” or “well timed.” Our Henry Moon supposedly came from Ireland, by these two areas are close enough geographically, separated only by a narrow channel, that either is feasible as the origin for “Moon.” Ironically, the family name books fail to mention the heavenly body as a possible source of nomenclature. A quick look at http://search.swyrich.com/ claims that the Moon name is Scottish with a silver coat of arms containing a black eagle and silver crest. The family motto, “Aeguam Sevare Mentem” is translated “To preserve an equal mind.” We promise additional research into the early Moon of the British Isles.

Most everyone is familiar with the lovely caretaker and now wife of Niles Crane on the hit NBC-TV series Frazier. Daphne and her mother, it seems though, speak with more of a Cockney British accent than Cornish or Irish. In the last 150 years, the two most famous Moons in the United States have been Dr. Parker T. Moon (1892-1936), a professor at Columbia University in New York, and Lottie Digges Moon (1840-1912), a Virginia Southern Baptist missionary to China. Of course, the most famous Moon in history is the Korean evangelist and cult leader, Rev. Sun Myung Moon (1920-2012), whose websites dominate any searches for the family name. His converts to this special brand of Christianity called the Unification Church number in the millions, and his mass wedding ceremonies have captured headlines for years. But, consider some of these websites for other Moons:

A search of Google.com will lead you to other Moon family sites, taking you on a fascinating journey from Ontario to Hawaii. The oldest other American we could find named Henry Moon was the son of Joseph Moon and Ann Brown and lived from 1790 to 1859, which is significantly after our Henry. He married Sarah Mills. Ironically, our first two generations of Moon were birthed by Sarahs, and we find three generations fathered by Josephs. Of course, the latest generation includes my daughter Annie and son Matthew.

Now, take a look at our eight generations of Moons in America as begun by Henry and Sarah, but realize that research is continuing to solve some of the mysteries of our early American ancestors. Cousin Christine Adams has probably investigated more sources on Henry and his descendants than any other family historian. She believes he lived in Cumberland County, PA, before coming to Allegheny. She says his colonial military service there and his official ownership of land in old Pine Township are questionable. Her research is far from complete, and we hope to present her work in a future article. Stay tuned.