by
Uncle Merle Gray
after the funeral service, loosely transcribed from tape
December 15, 2004 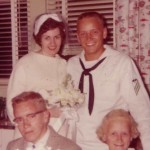 These are some of my memories of Butch [Carl] Pearce. He joined the Navy in the early 60’s. I visited him down there several times at the Pautuxent Naval Air Station. I had only started trucking about three or four years before this, in ‘59. And of course we talked about trucking and all that. When he got home on furlough one time, I was loaded for the east, New York City. He asked me about going along, but we weren’t allowed really to take anybody in the cab. You know me. I took him in and made different arrangements. We’re going down that Pennsylvania Turnpike, three and a half hours, and he sat over in that seat across from me and watched every move I was making: the gear shift, clutch, air brake, the big steering wheel was like 30-inches across, When we got out of that last tunnel at the 200-mile mark, Blue Mountain Tunnel, the road from there is as straight as a string for the next 27 miles to Carlisle. And he asked me, he says, “Unk, would you let me drive this thing?” I said, “Sure. Why not!” I pulled over in a wide spot there and got him in the side. I told him exactly how to start out, shift the gears, and he did real well. That was the first time he’d ever had a hold of the steering wheel—at that time it was only a 14-wheeler. So we drove down there and before we got to the exit, he pulled over and I took over. We went on and delivered that load and came back with another. We stayed at a motel in Allentown, but all he wanted to do from there on was talk about trucking.

That’s what got him started. From there he went to driving school down in Bedford, Pennsylvania. Next he got a job over at Freeport Transport hauling what we always called “poverty biscuits,” firebricks for the furnaces in the steel industry. We called them that because the freight rate on them was very low. He was with them about two years, and finally he saw that I was doing fairly well with my Autocar and he wanted to know if I’d buy him a truck and start him in business. Again, I said, “Sure. Why not!”

We went over to Kittaning and order him a 7000 White carover with a 250 Cummins. It was a 10-wheeler. We got him signed on with me over at Daniels Motor Fright, and he did real well. He put 985,000 miles on that truck. He wanted so desperately to go for that million mark, but the engine went on it, and we tried to get a new, bigger, more powerful engine, but it just wouldn’t fit. So he got the big Peterbuilt, and he did very well with that for quite a few years, then he got a beautiful green Volvo. That truck had almost a million miles when he took over. He had very good luck with it. As we said, Carl always knew what to do when something went wrong.

I feel greatly responsible for getting him started in his position. One other thing: they bought a lovely little home over in Natrona Heights, him and Jeannie. His dad was over there Saturday after Saturday after Saturday helping him fix up and repair. They decided the garage was a little past repairing, so they tore the garage down. They had no place to get rid of all that material, so they loaded it on the trailer and took it over along Rt. 228 to a wide place where I parked my truck. We put it all off there in a pile, and low and behold that stuff was so dry, like straw, that when we lit it on fire, it took off. Right above our heads, about 12 or 15-feet, there was a main telephone line inside a lead cable. We looked up and got to thinking, “What could we do?” There was really nothing we could do. We actually saw that lead cable start to sag, but thank the good Lord that it finally cooled enough that it didn’t melt through. That is my main remembrance of Carl Pearce. We were always close; we always classified him as our fourth son. Thank you.

1 Response to Remarks on Carl’s Life