My grandmother was Bertha Ione [Campbell] Gray (1893-1980). Her father was William “Will” James Campbell (1859-1954), and his father was Thomas Anderson Campbell (1837-1925). Our family patriarch, Thomas Campbell (1806-1848), arrived in America from Down County, Northern Ireland in 1828 [see “Background on the Scotch-Irish”]. This Ulster Scot’s family was no doubt originally a transplant from the highlands of Scotland to Northern Ireland. In fact, family tradition says that some of our ancestors fought with Neil Campbell for the independence of Scotland and in the crusades of Robert the Bruce and William Wallace of Brave Heart fame. But long before the 19th century potato famine drove the poverty-stricken masses from the limerick isle to America, our Scots-Irish followed their faith and their fortunes to Western Pennsylvania. Thomas Campbell reportedly came alone to America, directly from his port of immigration to join other family members in West Deer Township, Allegheny County, northeast of the thriving frontier town of Pittsburgh [see “Pittsburgh in 1820 and Beyond”]. The land, the weather, and their neighbors all reminded the Scots-Irish of home in the old country. Two years later, in 1830, Thomas married another Scots-Irish immigrant named Mary Crawford, about whom little is known. One source lists her father as Wilson. Another thinks it was James, a very common name given after the king of Scotland and England. If the grave stone in the Greenwood is correct then “James” is more likely. 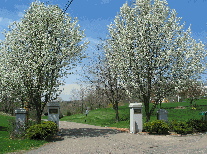 Mary’s mother was Sarah. Mary’s father or grandfather James had emigrated to Indiana County. PA, in 1784, from Derry County, Ireland, and deeded a small tract of land. In 1808 he purchased 120 acres of land from Westmoreland County Judge Young, which was located in what is now the prosperous Fox Chapel Borough and O’Hara Township, Allegheny County, northeast of  Pittsburgh. The following spring James, wife Sarah (also a Campbell, by the way), and their six children moved onto the farm where the elder Crawfords spent the rest of their lives and which remained in the Campbell family through at least four generations into the 20th century (History of Allegheny County). Read about that land before our Crawfords and Campbells settled there and the great ruler, Native American Guyasuta. Our original homestead is situated on what was called Squaw Run Road, until the local “political correcters” renamed it in 2021 .

My three-times Great-grandfather Thomas Campbell, just nine years after receiving American citizenship, died in 1848 at the age 42. He never used a middle name. Surely his years of clearing the land and farming to feed his family took a toll that led him to an early grave. He is buried at Greenwood Cemetery, pictured above, just off the Sharpsburg-Kittanning Road at Rts. 8 and 28. His oldest son, James Crawford Campbell, was only 16 when Thomas died but became the head of the house. Eventually, mother Mary went to live with her father but returned after he died. She lived to be 86. The old log house was expanded as the family grew and was later covered with siding. The “Old Campbell House,” as locals called it was replaced with “The New Campbell House” around 1900. The new residence is still in use today. 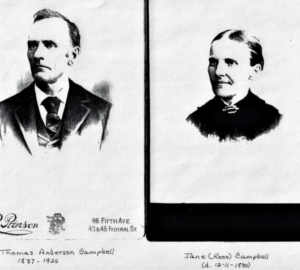 Thomas and Mary’s second son was Thomas Anderson Campbell (1837-1925), who was born on the farm and married Jane Ross (1837-1890). Her father, also a James, had likewise come from Ireland before marrying a “Miss Anderson of Pennsylvania.” We know today that her name was Martha. The elder Ross family owned a large farm near Bairdford, West Deer Township, but were probably not connected to the historic “Old Ross Mansion” near Harmerville, off Rt. 28. That was another James Ross (1762-1847), a United States Senator for whom Ross Township is named. Thomas and Jane Ross Campbell lived with her parents until shortly after the birth of my great-grandfather, their only son, William James Campbell (1859-1954). With the family growing, they bought a 95-acre farm from George McIntyre. It is located on Campbell Road near Bairdford, about halfway between Rt. 910 and Saxonburg Boulevard. In addition to William, the couple had seven daughters: Mary Ann (1868-1947), Martha Elizabeth (1865-1940), Florence Henrietta Stucki (1875-1952), Lydia “Lida” Fedder Cunningham (1872-1938), Sarah Jane (1862-1949), Harriet “Hattie” Mae (1864-1917), and a one who died in infancy. According to Florence Bostwick, the family seemed to be divided between the “country sibling” (William) and the “city sisters.” She says that all six sisters left the farm soon after high school, leaving no one to help their mother, except William. Lydia and Florence became teachers in Pittsburgh. Mary was a professional seamstress who served many prosperous clients, including the well-known fiction writer Mary Roberts Rhinehart. Sarah also made dresses professionally, but married, at age 44, an older man, 53, who had a plumbing business. Martha was Sarah’s housekeeper. Hattie married and raised four children, [Read more about these girls, especially Florence who married a wealthy American industrialist, and other Campbell cousins. Also see “Descendants of Thomas and Mary Crawford Campbell”]. So, William, or “Will” as he was affectionately called, was left to help both his mother and father. In addition to farming, his father, Thomas, served two terms as township road commissioner (Memoirs). Another division in the family may have been religion. Thomas was a Methodist while Jane was a Presbyterian.

My great-grandfather, William James Campbell (1859-1954), was a third generation American. The Memoirs of Allegheny County, Pennsylvania simply says that he was a “prosperous farmer of West Deer Township of Irish ancestry, who for generations back were successful tillers of the soil” (345). My mother, his granddaughter, claims that he was born prematurely, a mere one pound that could easily fit into the palm of your hand. My Uncle Merle says that his Grandpap William never grew taller than five feet. According to an article by my late Aunt Edna Gray entitled “Remembering: The Campbell Family,” “W.J. Campbell grew up on his father’s farm, enjoyed the usual school routine, and obtained a thorough mastery of the details of farm work by the time he reached manhood.” Another source says, “For some time now, he has had charge of the homestead, managing the affairs with discretion and good judgment” (Memoirs, 1904). In 1889 he married my Great-Grandmother Rachel Elizabeth Hoffman (1866-1946), probably the only ethnic German in our otherwise Scots-Irish family and the daughter of a prominent West Deer Township couple, George (1828-1907) and Annie K. [Brown] Hoffman (1827-1890). William and Rachel had six children: Lloyd Webster (1890-1891), Raymond Norman (1892-1978). [See his “World War I Diary”], my grandmother Bertha Ione (1893-1980) [See other interesting articles on “Table of Contents: Campbell.”], Clifford Anderson (1896-1988), William Kenneth (1903- ) and Ellis “Emerson” Craig (1906-1926). [Read about his and other tragic deaths in the articles “When Bad Things Happen” and “Campbell Misfortunes.”]

Neighbors knew Will Campbell for his regular trips to Pittsburgh on his horse-drawn produce wagon. [Read other recollections of William and Rachel in “Memories of my Mother: Part II,”] My mother spent a lot of time at her elderly grandparents’ house as a teenage caretaker. She tells of churning butter in the basement where an indoor running stream of cold water kept the milk from spoiling. Grandma Rachel was frail and needed lots of help in her final years. She died right after World War II. But William, though small of stature, was always robust, known for climbing atop his work horse, bareback, in his 90’s, and riding to the post office each day to pick up the mail. His lived to be 95 years old.

I remember visiting him before he died in 1954 when I was a child. He didn’t look very short to me then. Of course, I was only 6 years old. The farm was a great place to find fossils, especially down by the creek in the shale banks. Today the old house and barn have been completely restored, and the present owners operate a beautifully manicured horse ranch known as “Green Tree Farm.”

The Scotch-Irish Campbell name is presently ranked 43rd in the United States with well over half a million descendants, according to one statistical survey. The New Dictionary of American Family Names claims that the name “Campbell” comes from two Gaelic words, “cam” and “beul,” and means “a wry (or crooked) mouth with arched lips,” a derogatory term given by neighboring clans on account of “moral defects.” What those defects were exactly aren’t known, but they might have been just name calling from some jealous rival family in the neighborhood. The narratives and genealogical charts found in the Table of Contents: Campbell tell the story of my Campbell ancestors from books, interviews, and observations in hopes of providing our descendants with a permanent record of their achievements. My favorites include our family’s association with H.J. Heinz, the household name who referred to cousin William Oliver Campbell (1868-1939) as “The Tomato King.” While I’m certain that we won’t ever be able to mention everything, you can rest assured we’ll be continually updating and adding material as it becomes available, so check back often or respond below.

Much material for this series was collected for the unpublished book entitled “The History and Genealogy of the Descendants from Thomas Campbell,” published in 1996 by the following Campbell Cousins:

They graciously dedicated their work to the memory of these Campbell ancestors who left “precious data and recorded memories of older generations:”