“Trinity”: The Story of Northern Ireland, by Leon Uris

a book review of the historical novel
Trinity
by author
Leon Uris
New York: Doubleday, 1976
as reviewed by
Larry Pearce
4/4/05

In preparation for our family genealogical research trip to Ireland and Scotland in the  summer of 2005, plus having finished reading the entire four volumes of Churchill’s History of the English Speaking People while writing several synopses for E-gen’s Family History Book Review, I was referred by a church friend to the masterpiece on the struggles of the Celtic people of the Emerald Isle, Trinity by Leon Uris. Although I cannot begin to review all of the history, action, and intrigue of the author’s 815 pages, I will give a brief  overview and opinion of this educational and entertaining tale. Having read his story of the evolution of the State of Israel, entitled Exodus, as was the film, I knew that Leon Uris works were of the historical fiction genre. In fact, it seems that many of the characters and situations there are loosely based on real people and events. At least he takes the time to carefully weave in historical context using place names and dates. For this piece, after introducing you to the author, I will mention a few of those. My desire was to write a follow up to this article upon my return from Ireland and offer my opinion of how close he came to painting the real Ireland. Of course much has changed in the last 30 years and fortunately for the better, but as of the revision date below, I haven’t re-read the book in order give an informed opinion. Stay tuned.

Leon Marcus Uris was born in Baltimore in 1924, the son of Jewish parents. Interestingly, at age six he wrote an operetta inspired by the death of his dog. He dropped out of high school, having failed English three times, to join the Marines during World War II. Afterwards, in 1950, his sale of an article to Esquire magazine inspired him to begin his first novel, the bestseller Battle Cry. His second book, The Angry Hills, was set in Greece. His most famous work, however, came about through his work as a journalist in the Middle East. As we said earlier, Exodus was his bestseller about Israel, and it tapped his skills as a screenwriter. Later, he developed one of the book’s scenarios pertaining to the Jews of Warsaw and called it Mila 18. Other titles include Armageddon, Topaz, QB VII, The Haj, Mitla Pass, and Redemption. Details of his personal life, sometimes tragic, are available online. 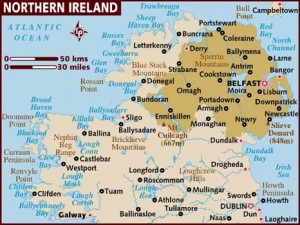 The main character in Trinity is Conor Larkin, and the narrator is his childhood friend and neighbor Seamus O’Niell from the village of Ballyutogue in what is today Northern Ireland. As the story opens, it’s the spring of 1885 and the town is burying Conor’s famous grandfather, Kilty Larkin, a farmer and political activist. It doesn’t take long to understand that the “trinity” in the title is a reference to both the Holy Three around which the lives of these deeply Roman Catholic people revolve, Father, Son, and Holy Ghost, and the competitive three religions of northern Ireland, the Roman Catholics, the Scots-Irish Protestant Presbyterians, and the Royalist Anglicans.

The first major struggle, however, is between Connor, who wants to be educated and free, and his father Tomas, who wants him, as the oldest son, to take over the family farm. Seamus, meanwhile, is allowed to accept a scholarship after his local schooling and writes:
From my own years at Queen’s College I came to know Belfast as a queer city on the Irish landscape. If there was a revival in the south, little of the impact reached that place. For this was the heartland of the Protestant settlement. Counties Down and Antrim never did figure greatly in native Catholic habitation. When the Presbyterians settled as planters in 1600, Belfast was born from a swamp. Nearly all the early population came from Presbyterian farms in the two adjoining counties. Communal living and work sharing, an agrarian tradition brought into Belfast, tended to give the city more of a look of linked villages. (469)

SS Nomadic outside
Museum of the Titanic
Belfast

Today, the City of Belfast shows little resemblance to the war-torn capitol of just 40 years ago, except for some neighborhoods divided by physical barriers, called “Peace Lines.” We kept to the tourist sections. Aside from the busy bars and and bustling docks and train stations, Belfast is perhaps best know for its new Museum of the Titanic, sitting on the spot where the ill-fated ship was constructed. Another irony is that our son, working from home for world-renowned Allstate Insurance, often has late night video conferences with fellow employees there. I keep asking for their names to see if we’re related. 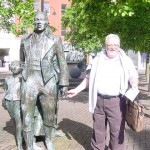 Of course, every surname on my mother’s side, Gray, Campbell, Norris, Crawford, and so on, came from the six counties around Belfast. My wife and I walked the windy walls of Londonderry and had our umbrella turned inside out. It’s as if the harsh weather is indicative of the political climate there. Of course, the Natives call their city just “Derry,” refusing to acknowledge even to this day their oversight from the UK’s capitol city. In fact, it’s not unusual to see road signs to Londonderry with “London” painted over. 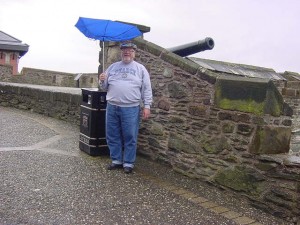 Perhaps the most striking memory for me was our tour of the Guildhall there. Build originally as the Market House, it was destroyed in 1689 by English forces under the rule of King James II. I recently discovered a list of soldiers who successfully defended the city within the walls, several of whom were named Crawford and Gray, perhaps my mother’s  ancestors. The grand building was completely remodeled in 1890 and renamed Guildhall, only to be severely devastated by fire in 1908. What a symbol of misfortune in Ulster. 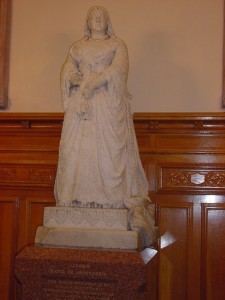 Probably the most recent symbol of violence in the North were the numerous bombings, costing some, mostly English sympathizers, their lives. I will never forget the statue of Queen Victoria standing proudly in the Guildhall, victim of one such bombing, yet a reminder of how far the people of Northern Ireland have come. Life has been much better since the Good Friday Agreement of 1998. I’ll let you read what others have to say about what the Brits have called “The Troubles.” Until I re-read the ultimate book on the background of this struggle and add to this synopsis, here are several reviews of the Uris work, Trinity: