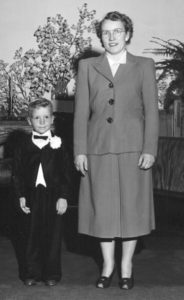 Not that I remember anything of the day, but I was probably about five or six years old and living with my parents, two brothers, and a sister in Cooperstown, Butler County, PA. That would make it about 1955 or so, and the occasion was a Tom Thumb wedding. We’ll tell you where the name came from in a minute, but as you can see from above, there were pictures taken of the event held at our church, Glade Run United Presbyterian. I’m sure that the majority of planners and some of the participants are dead by now, but according to the internet, such ceremonies were commonly held back then as fund raisers, for publicity, or just to enjoy the novelty of the event. With so little to go on, I’ll be relying heavily on the internet for my facts. My reason for sharing that day with you is to say that, after two-thirds of a century and looking at the old black and white photos, I still feel very special.

The author Larry
at home before
the wedding

I have no idea why I was chosen as the groom except perhaps that I had platinum curly, blonde hair, inherited from my mother’s Scots-Irish side of the family. It didn’t hurt either  that Mom and Dad were active in the church. I don’t even remember whom I married. I should say also, at the outset, that additional pictures and even an old 8 mm film of that day exist somewhere. I’m still searching for them and hope to include the photos and a digitized version of the film in a future revision of this article. But let’s begin with the story of how, historically, this all began.

General Tom Thumb was a “little person” and performer in P.T. Barnum’s (1810-1891) circus around the time of the American Civil War. His adopted name came from an anonymous Olde English poem. Born in Connecticut, the son of a carpenter, he had a condition called “dwarfism.” Both parents were of normal height, but the General was said to have been larger than a normal baby. Little was known about his eventual condition back then, and certainly little is known today about “short-statued” persons. There is no cure for this rarity, but it can be managed. The General’s actual name was Charles Stratton (1838-1883), and he was a distant relative of Barnum, who taught him show business at an early age. He was only five when he accompanied Barnum on his first tour. A gifted performer, Stratton could sing and dance and often performed a pantsless routine in which he pretended to be a Greek statue, commanding the attention of women by claiming to be a General in “Cupid’s Artillery.” It has been estimated that he played to over 50 million persons in two dozen countries in his professional 35 years. Many famous people from around the world, including Queen Victoria, enjoyed his performances. At his maximum height, Stratton was just over three feet tall. 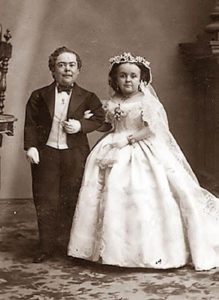 Stratton married Lavinia Warren, a fellow little person, in February 1863. The traditional  ceremony took place inside New York City’s Grace Episcopal Church. The internationally-followed event came to be known as the “Fairy Wedding.” The reception welcomed as many as 10,000 guests, and the couple greeted everyone, standing atop a grand piano in the fancy Metropolitan Hotel. Whether it was another P.T. Barnum commercialized sideshow or something serious, the whole thing was legal and received as a “singular sensation,” with enthusiasm and curiosity. No doubt it provided a break from the daily horrible news coming from the front lines of the War. It’s said that details of the wedding could be found on the front page of the New York Times for three days straight. Gifts to the couple included a Tiffany miniature horse and chariot. After President Lincoln officially received the couple, the unusual newspaper account read:

Those who did and those who did not attend the wedding of Gen. Thomas Thumb and Queen Lavinia Warren composed the population of this great metropolis yesterday, and thenceforth religious and civil parties sink into comparative insignificance before this arbitrating query of fate — Did you or did you not see Tom Thumb married?

The General went on to become quite wealthy working with Barnum, bailing the showman out of financial trouble on one occasion, and even becoming a business partner. He had several luxurious homes, fine clothes, and a fancy steam-powered yacht. Stratton retired at age 40. Five years later, while staying at a hotel in Milwaukee, he and Lavinia were saved from a terrible fire there by the hotel manager. More than 70 people died in the inferno. Just six months later, the General died unexpectedly of a stroke. He was only 45-years old.

He was well-loved. Some 20,000 people attended the funeral. His partner P.T. Barnum had a life-sized statue of Tom Thumb placed as a memorial on his grave in Bridgeport, CT. Wife Lavinia lived another 35 years, and was buried next to her husband. Her stone reads simply, “His Wife.”

By the 1890s, Tom Thumb weddings were becoming quite popular. In 1898, the Walter H. Baker Company of Boston published a do-it-yourself guide to holding a “Fairy Wedding.” According to one reviewer, it contained “wearisome bad marriage jokes for the benefit of the grown-ups, punctuated with tired stereotypes about progressive womanhood and the old ball-and-chain.” The specifics and even scripts, historical photographs, and videos are  available online. I don’t know how much, if any, of the original scripted material was pronounced in my 1955 wedding, but I’d like to think that the values first held in the 19th century ceremonies were promoted: teaching children about religious and moral standards, modeling the highest adult conduct. Perhaps someday I’ll find out whom I married (probably illegally) that first time 65 years ago, but until then, here’s a wonderful photo of my second wife, the one I’ve been faithful to for fifty years. 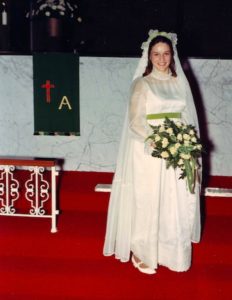