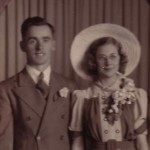 The second son of Wesley and Bessie Reed Pearce came along three years after the first, in 1914, the same year that both his grandparents, Charles and Permelia had died within four days of each other [see “Settlement at Pine Creek: Pt. II”]. He was named Howard, from the Old English and German having several meanings “brave heart,” “high warden,” and “ewe herder.” Pronunciations and spellings have varied greatly over time and distances [see “Upon this Rock: Pt. I – The Pearce Name”]. Howard is also an old and noble British family. At least two other Howard Pearces can be found in the Pearce-Austen lines – the oldest son (1893 – ?) to the second marriage of Harry A. Pearce (1862 – ?) of Illinois, and the second oldest (?) to Walter (1859 – ?) of Kansas. These Howards were cousins through Richard N. Pearce (1824-97) and John (1831-95) who were the sixth and ninth sons of Richard and Susan Austen Pearce respectively, the original Bourne connection. So all these Howards were fourth generation American cousins, but we wonder if they ever met each other because of the distances involved. Unlike his older brother Walter, the Howard born at Pine Creek impressed many people as quiet, shy, and reserved. His oldest son, Wayne, gave this description of his dad’s demeanor: “gentle, but strong; very moral and straight-laced.”

Howard probably lived a life similar to his three brothers on the Pearce farm, with chores to do, homework, and not much time for play. He was only 13 when the family was forced to move to a new farm near Mars, Butler County, PA, in 1927 because of Allegheny County taking over the original homestead to build North Park [see “Settlement at Pine Creek: Pt. III”]. This must have been a very difficult time for the young man, who was barely a teenager, to make new friends and carry on with his life. We do know that he became interested in building things. After his marriage to Esther Olive Wise (1920-2016), from nearby Butler around the start of World War II, Howard was given seven acres as a living inheritance. This property is located along the Pearce Road, Middlesex Township, between what was his brother Walter’s property and the new Pearce homestead. 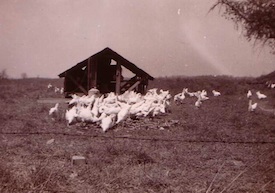 The ambitious Howard, self-employed most of his life, built not one, but two houses and a very large chicken coop on the land. The most amazing part is that all the construction was out of reclaimed lumber. Howard and Esther lived in one of the homes and rented the other while raising as many as 10,000 chickens and selling eggs. Because of his agricultural status, Howard was exempted from military service during World War II. After the war, the family moved to California, and then in 1950 to Florida where his carpentry skills were much in demand. Most of Howard’s professional life was dedicated to helping with the construction of thousands of homes and businesses in and around the Orlando area. In later years his specialty was fitting and finishing church doors in the rapidly expanding community. Wife Esther became a licensed real estate agent and was heavily involved in marketing Orlando’s new homes. But, the couple’s primary mission was the care and well-being of their four children: Vivian, Wayne, Kathy, and David.

Vivian lives near Washington D.C. where she worked for the U.S. Government. Kathy, once a licensed  beautician, now lives in North Carolina. Wayne, who retired from Bell South, had to leave the Orlando area to be cared for by Vivian’s daughter in North Carolina before his death in 2017. David lives and works in Ft. Lauderdale. The Howard Pearce family communicates with each other often, especially for  weddings and other special events. Most recently, with the death of mother Esther at the age of 95, everyone gathered in Orlando for a celebration of her life. She now rests beside her beloved Howard in the cemetery near their long-time Winter Park home.

Several years ago, I visited the Howard Pearce property along Pearce Road. The two houses that he built are still in good repair and surrounded by towering shade trees. I did not see the chicken coop, however. My memories of Uncle Howard and Aunt Esther are fond ones filled with palm trees along busy highways, a small orange grove in his front yard, and a beautiful lake behind his house. Visits to Orlando over Christmas break as a youth always involved trips to the crystal clear Rock Spring, where I developed my love for swimming, Cypress Gardens, and the latest tourist attractions. There was a lot to do and see even before Disney World and the movie studios set up camp in Central Florida. Although Howard was busy with his carpentry work and Esther as a highly successful real estate agent, they seemed to give us all the time in the world. It was as if their large, spacious home was wide-open for us. After I got married and took my family there, they even went with us to Disney World, and we all had a wonderful time. We got to spend the night in their RV parked in the driveway, and that was a treat for a young family that had never been in such a vehicle.

Both Howard and Esther were always busy in the community. He was a deacon in their Baptist church. She participated in a singing group for seniors that entertained at nursing homes and other places.

As my family grew and we became busier and busier and their trips north became fewer and fewer, I regret to say that we didn’t see as much of them. My father Ralph did fly down to spend some time with his brother before his death in 1990. We met Esther once at a condo David had bought in a resort at the eastern edge of Somerset County where we live. When my father passed away in February of 2002, Esther, Wayne, Vivian  and Kathy drove non-stop from Florida and Virginia to Mars to be at his funeral. In 2010 my sister Ellen, wife Susan, and I had lunch with the Orlando Pearces while we were touring the Magic Kingdom. The next year, over two and a half decades after Howard died, we all re-established  contact with Howard’s descendants at a 93rd birthday celebration for Esther in Orlando. Many of these same people gathered again for her burial in 2016.

We are now in the process of updating the Howard and Esther Pearce  family tree so check back again: