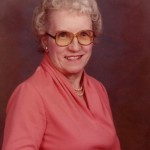 In a TV sermon December 9, 2002, entitled, “From the Pit to the Palace,” The Rev. John Hagee of Cornerstone Church, San Antonio, spoke of those in heaven with scars from their earthly experiences: Joseph, son of Jacob, from his time in jail under Pharaoh; Jesus Christ, from his time on the cross; and St. Paul, from his various imprisonments and shipwrecks. I thought of my mother Ruth (1917-2005) and her many scars from childhood. But, in later life she also became a survivor of an auto accident and cancer. Having considered the striking parallel between Mother and her biblical namesake, Ruth, in the first three portions of this series, we want to share some final information about a most unusual and interesting individual, Ruth Elizabeth [Gray] Pearce.

In the late 1980’s, and possibly the most frightening episode of my life, I received a telephone call from my office while I was on the road selling radio advertising. The secretary said that she had received a call from the Tyrone, PA, Hospital reporting that my parents had been in a car accident while on their way to visit my brother Paul in Connecticut. Apparently, my father had missed an entry ramp to the interstate and, after turning the car around to try again, was hit broadside on the passenger door with my mother receiving the brunt of the force while still in her seatbelt. Dad was unhurt, but Mother had a broken pelvis, broken ribs, and many bruises. The car was totaled. This would have been bad enough for a younger couple, but Ralph and Ruth were in their 70’s at the time.

I remember driving as fast as I could over the distance that would normally take two hours. I made the trip in ninety minutes. The doctor said that there wasn’t much more they could do for Mother but stabilize the broken parts and make her comfortable. Dad and I decided to have her transported by ambulance to the nearest medical facility to his Moon Township residence, which was the Sewickley Valley Hospital. The good thing was that all her doctors were there and friends and family would be close by. The bad thing was that she’d have to endure a three-hour ride over some rather bumpy Pennsylvania roads. To make a long story short, she made the trip and recovered in record time. Unfortunately, in a few months after returning home she nearly died when her spleen burst, having been weakened by the accident. This sent her unconscious to the kitchen floor. Fortunately, Dad had the good sense to call 911 and a neighbor, Pat Hersh, who is a nurse. Again, she was rushed to Sewickley Hospital and survived. But, the best and the worst part of that incident was that she was discovered to have breast cancer. While the spleen, the primary human immune system organ, is dispensable as long as one has healthy bone marrow, fighting cancer would be much more difficult without it. After months of intense therapy and medication, hair loss and hospital visits, Mother, on top of everything else, beat cancer too. She remained healthy for more than a decade but with plenty of scars to tell her story.

Besides the four hospital visits to deliver her children, Ruth’s other visits included complications with appendicitis when she was pregnant with her first child and a hysterectomy that nearly cost her her life in the early 1960’s. I was only 12 at the time, but I remember the fear in my dad’s eyes as he helped her into the car to take her back to the hospital when she started to hemorrhage at home. I believe he thought he was going to lose her then.

Two stories of Ruth’s “toughness” in her early life have been handed down and are worth repeating here. Her sister Edna had come for a visit to the Campbell farm while Ruth was caring for their Grandma Rachel. They were in the barn and Ruth was showing Edna how a cutting box worked. Ear corn, after it was dried, was put in there for shelling. Sharp knives separated the grain from the ear when the crank was turned. Well, Ruth somehow got her finger in the cogs and apparently the skin was painfully torn off. Without much adieu Ruth took part of her apron and wrapped it around the wound and the two of them took a walk. Mother implored Edna, “Please don’t tell anyone what happened.” Remember, Grandpap Campbell was reported to be rather stern. Fortunately, when they returned to the house, her Aunt Ruth bandaged the wound properly, but there’s been a big scar on her finger ever since.

Another time, at the Gibsonia farm when Ruth was much younger, she stepped on broken glass while she was swimming with her siblings in the creek. They managed to get the bleeding stopped, and her brother Bart got a stick for her to walk with as they slowly traversed the long distance home. She says, “I have scars all over me from being cut, because we went in our bare feet all the time.”

Aside from those few experiences, Mother has always been a very healthy person. Though she never worked outside the home after being married, she stayed busy with housework: washing, cleaning, cooking and baking. With four children a total of ten years apart and a husband who loved to work in the yard and garden, there was always something to do. Between his family of six and her family of fourteen, there were literally dozens and dozens of extended family members coming and going, not to mention the family friends and church associates. Besides regular church and Sunday school attendance, mother was at one time a Deacon at the Glade Run United Presbyterian in Cooperstown, Butler County. Her duties included taking food and flowers to shut-ins, as if she didn’t have enough to do preparing food and kids for church dinners, Sunday school picnics and family get-togethers and reunions.

Certainly, the biggest change in Ruth’s life came when Dad died, February 2, 2002. [See the E-Gen: Pearce article “Sons of Wesley and Bessie: Ralph H. Pearce.”] Almost 85 years old, he had been healthy all of his life except for the removal of his gall bladder in his mid-60’s and the normal colds and ear infections everyone gets. He had even been born in the family homestead at Pine Creek, McCandless Township, without the benefit of a safe health care facility. But, in the final years he had experienced several mild cases of pneumonia, the same insidious disease that had killed both of his grandparents within four days of each other back in 1914, before he was born. In late January of 2002 Mother had instructed him to go to the doctor and had sent him on some errands in the car. Before he even arrived back home, the doctor had called my sister Ellen, who was living with them, to have her take him to the hospital immediately. The diagnosis was, again, pneumonia. My wife and I visited him at Sewickley Hospital that Saturday and he talked normally and enjoyed his lunch. We saw no reason why he shouldn’t recover completely and go home in a few days. Well, within a few days he was on a respirator and in a coma. Apparently the doctors had not been aggressive enough with his treatment or had picked the wrong antibiotic, and he was gone exactly one week after our visit. Everyone was devastated, but none like Mother. She bravely endured the funeral and the well-wishers, but life would never be the same without her husband of 63 years, her “Ralphie.” Her daughter Ellen became her caretaker. Mother enjoyed calls and visits from her sons in those remaining years, but we all wish we could have seen them together just one more time. We loved to hear about their annual autumn trips to Cook’s Forest, Pennsylvania, on the anniversary of their first date, and the summer outings to the beach at Presque Isle, Lake Erie. To her dying day, Mother insisted that they never had one fight as long as they were married. My observation is that Dad could hardly get a word in edgewise when Mother started to talk, but we all knew that he was the quiet boss of the family.

In mid October of 2005, a Sunday morning, I received a call from my sister that Mother had been taken to the hospital with a broken ankle. Apparently, she had been combing her hair in front of the bathroom mirror, getting ready for church as always, when she fainted and dropped straight down, putting an intolerable strain on her one leg. She had a cast applied and took therapy before being sent home. About a month later, she became unresponsive and spent time being shuttled between a nursing facility and the hospital. About the time that her cast was to have been removed, she sank into a comma, which we know now was caused by the return of her cancer. Within days, her family lovingly placed her in a hospice facility where she passed peaceably, Her entire immediate family had the opportunity to say goodbye just the day before.

In conclusion, all Ruth’s friends and family believe there was a great reunion in heaven that day in late November 2005, when her husband Ralph opened the gate to welcome her to their true home. Like Boaz from the book bearing her name, mentioned in our first articles in the series, Ralph once again introduced her to the redemption and resurrection that he’d found. God needed the handyman in Ralph in 2002 and took him home, and only three years later He called for the world’s greatest housekeeper and cook, my mother Ruth Elizabeth. Her admission ticket was the “mixed blessing” of sacrifice for family and the satisfaction of a life well-lived that Rev. Hall sermonized about the biblical Ruth’s life. As her biblical middle name Elizabeth indicates, “God is my oath,” her life demonstrated a commitment to Godly principles. Our Ruth had the scars that Rev. Hagee says are necessary for sainthood, and like the biblical characters Ruth and Elizabeth, she was been a good and faithful servant, to her grandparents, her parents, her husband, her children, her extended family, her friends, and as a deacon, even to strangers. Now, redeemed for eternity, she’s free, having joined her husband and ancestors in, as her Presbyterian heritage suggests, “Worshipping God and enjoying Him forever.”