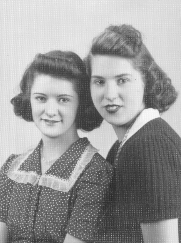 It’s not often that help with family history comes in twos, but such was the case with my dad’s sister-cousins, Nettie Stark and Alice Drescher, from the Sarver-Saxonburg area of southern Butler County, PA. Their maiden names were Miller, but we shared the Hill lineage through their grandparents, my great-grandparents, Joseph and Alice Moon Hill. I admittedly didn’t know them too well, just the polite “Hello” when we visited in my childhood. I remember being asked to play everyone’s favorite hymn, “How Great Thou Art,” on the little spinet organ in Nettie and her husband Jim’s living room one time. I don’t think I ever visited Alice and husband Emery in their home. Later, at the occasional Hill Family Reunion that they would organize, their light-hearted brother Walter would entertain everyone with his  zany, hand-made “mongoose-jumping-out-of-a-box” device. He stole the show, but my first impressions of Nettie and Alice were that of warm and caring individuals. After my father Ralph, their first cousin, passed away in 2002, my wife and I really didn’t have much reason to visit these two older couples. Jim Stark, who had worked as a banker for a time, did place a small investment with me when I was starting out as a Registered Rep, but he soon cashed that in for greener, safer pastures. After all, these folks were in their 80s at the time. Maybe we visited them as a stop-over on the way to or from visits to family in Mars or Butler. At any rate, by the late 1990s I was heavily into genealogy as had been Nettie and Alice. I really think they were searching for someone who had a similar interest and would preserve their knowledge and experience for future generations when they found me. I was given photographs, charts, even hand-written notes, but best of all, stories of my ancestors. I also got to know their kids, nieces, and nephews better. Susan and I would share lunch with Jim and Nettie, either in their kitchen or at their favorite small restaurant in nearby Saxonburg. Afterwards, we’d be welcomed to Alice and Emery’s just across town, with home-made cookies. Who wouldn’t look forward to those meetings?

Then the sad day came when brother Walter passed away in 2006. I was able to attend his funeral at Bull Creek Presbyterian, best known to me as the 200+ year old home church of my Leslie and Gray families on my mother’s side. Not long after came word that Nettie was suffering from a terminal illness and would soon pass. Her funeral was at their nearby home church, Clinton Presbyterian, and we were able to attend. Today, Jim is in his late 90s and still lives independently with the help of his daughters Cheryl and Janet. That left Alice to answer all my questions of family history, and she and Emery had done their homework, having visited and written to wonderful sources. That’s when we got to know Walter’s son Kevin, who has worked for the Smithsonian Institution in Washington, D.C. for many years. He has done extensive research through Ancestry.com and other data bases. Some of our discussions at Drescher’s centered around Emery’s Army service in World War II. Moving from North Africa to Italy to Europe, he was one of the reasons the U.S. was able to put the squeeze on and eventually defeat Mussolini and Hitler. But, in the meantime, he has survived measles, malaria, and even pancreatic cancer. We really thought that he’d pass before Alice, but she suffered silently with terminal cancer and he outlived her. She too now rests in the Bull Creek Churchyard with her brother. Emery has now crossed the century mark, and with the help of his daughters Louise and Jean and grandson Tim, still lives in the family homestead.

Susan and I visit Jim and Emery as often as we can and are never at a loss when it comes to conversation. We always come away more blessed than anything we could possibly offer them. Aside from visiting the two widowers, the only way I can possibly honor the memories of my two sister-cousins for their help in researching and writing about our family history is to share their stories here. Please use the Comments section below to record your thoughts of our dear cousins. These, then, are the final words used to describe them, from the local newspaper, the Butler Eagle:

Nettie M. Stark, 87, of Sarver passed away on Tuesday, May 1, 2012, at the Good Samaritan Hospice with her family by her side. Born Oct. 28, 1924, in Tarentum, she was the daughter of the late Clarence and Myra (Hill) Miller. Nettie was a 1943 graduate of Freeport High School. She was employed at PPG in Creighton and Stark’s Feed Store in Saxonburg, which she and her husband owned and operated. She also was a school bus driver for 26 years for the Bauman Bus Co. and was the co-manager at the Route 38 location. Nettie was a volunteer for the South Central Butler food bank in Middlesex Township and delivered Meals on Wheels for the Freeport location.

She enjoyed sewing, quilting, volunteering and watching her grandson, Scott, race stock cars. Nettie dedicated her life to her family and her church. Surviving are her loving husband, James W. Stark, who she married on Feb. 2, 1946; her daughters, Janet (Alan) Bochek of Cheswick and Cheryl (Joe) Criswell of Sarver; her grandchildren, Scott (Debbie Drapela) Bochek of Cheswick, Shelley (Michael) Whipkey of Butler and Crystal Stark of Hilliards; her great-grandchildren, Seth and Payton Whipkey; her stepgrandson, Jace Criswell of Pittsburgh; her stepgranddaughter, McKenzie Criswell of Lower Burrell; and her siblings, Alice (Emery) Drescher of Saxonburg [died in 2017], Paul (Stella) Miller of Sissonville, W.Va., and Melva (James) Smith of Freeport [died in 2014]. In addition to her parents, she was preceded in death by her son, Bruce Stark, who passed away in 2001, and her brother, Walter Miller [died in 2006].

Alice J. Drescher, 91, of Saxonburg passed away Tuesday, July 11, 2017, at her home. Born Dec. 20, 1925, in East Deer, Pa., she was the daughter of the late Clarence T. Miller and Myra J. Hill Miller. She worked for a short time after marriage in the office at Allegheny Ludlum. Alice was a homemaker. She was Christian. She loved gardening, canning, baking, flowers, reupholstering and sewing and tailoring. She enjoyed her family and friends.

Surviving are her loving husband, Emery A. Drescher, whom she married May 8, 1948; her daughters, Louise M. (Daniel R.) Droney of Seneca, Pa., and Jean A. (Larry) Noble of Murrysville, Pa.; her grandson, Timothy L. Droney of Seneca, Pa.; her brother, Paul Miller of West Virginia; and many nieces, nephews and friends. In addition to her parents, she was preceded in death by one brother, Walter Miller, and two sisters, Nettie Stark and Melva Smith.

Friends of Alice J. Drescher will be received from 2 to 4 p.m. and 6 to 8 p.m. Friday at the Fox Funeral Home, 410 W. Main St., Saxonburg. There will be no services. Burial will be private. The family would like to thank the Area on Aging, Concordia Visiting Nurses and Good Samaritan Hospice for their wonderful care and service. In lieu of flowers, Alice requested people to visit an elderly person because she was blessed to have people visit her.