Posted on April 21, 2020 in Amish History
and by Erik Wesner on AmishAmerica.com
(Click on link for original reader comments)
adapted here by Larry Pearce on April 22, 2020 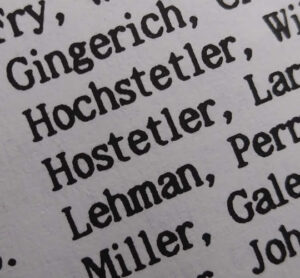 Over half a century ago, Amish writer Joseph Stoll penned a series of articles on Amish surnames, titled “Amish and Mennonite Family Names.” These were published in the then-fledgling Family Life monthly, in four parts spanning December 1968 to March 1969. I’ve chosen origin stories for five common names to share with you today. Where did common Amish names come from? Do they have any specific meaning? Did the names change at some point? Stoll answers some of those questions, and I’ve tried to fill in a few gaps.

As introduction to his articles, Stoll writes:

For many years the Amish have shown a great interest in family histories, in genealogies, and family relationships. Many people first become acquainted with each other by discussing “Freundschaft” [extended family, kinfolk, relatives] and quite possibly discovering that such and such an immigrant is a common ancestor. This interest in family trees and their branches can be of value, or it can be a waste of time and money – it all depends on the motive.

What does he mean by that? He elaborates:

…we may be tempted today to be proud of our family heritage, feeling that somehow we have been especially favored to be the descendants of the faithful martyrs of old.

True, we have been greatly favored. We have been favored indeed to have been born to Christian parents, and to have been give a godly training and upbringing. This is a birthright not to be despised. But being born into a Christian home has its limitations. We must not forget that any person of the world has just as much right to faith in Christ as we have. Below, I’ve listed the name, along with alternative spellings seen among Amish, when applicable. Some names were Anglicized, as you can see comparing to the original German versions. Others were not Anglicized. In some cases, only one spelling is used, while in others an alternate version – or more – emerged. Some of these names can also be found among Mennonites. All of these surnames remain common among the Amish today. My comments are italicized. 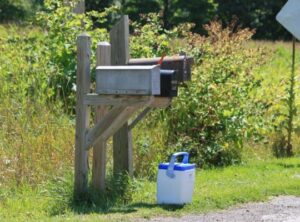 1. Beachy (Beechy, Peachey) – The original German spelling of this name was Bitschi or sometimes Pitsche. Peter Bitsche came to America from Switzerland in 1767, settling in Somerset County, Pennsylvania, about a mile from the present site of Springs. There, he and his two sons, Abraham and Peter, are buried on the old homestead. The name Beachy is still common in Somerset County, and in many other Amish settlements. The Peachey variation is most common in Big Valley, Pennsylvania. 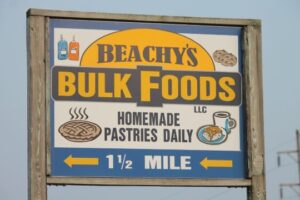 2. Swartzentruber – This Swiss name may mean a “seller of black grapes”. In  the early 1700s a family Bible used the spelling Schwartzentraub.The Schwartzentrubers are believed to have been natives of Waldeck, Germany. The first known immigrations occurred soon after 1800, when members of the family came to Somerset County, Pennsylvania and to Ontario. Michael and Christian Schwartzentruber were living in Ontario before 1840. The Swartzentruber name is attached to a collection of very plain Amish churches found in over a dozen states today. Two early leaders of this conservative-minded faction bore the Swartzentruber surname, which led to the group carrying it as a whole.

3. Lapp – There is a tradition that John Lapp, a young unmarried Amishman, came to America in 1733, fell in love with a Mennonite girl and married her, then transferred his membership to the Mennonites. He is the ancestor of most of the Mennonite Lapps. The ancestor of the Amish Lapps is Michael Lapp, born in 1737, probably in Europe, who likely came to America at an early age. He had a family of eleven children, the eldest of whom, John Lapp, has a large offspring among the Amish of Lancaster County.

As far as the meaning of Lapp, I can add the following to Stoll’s description (original source: Dictionary of American Family Names ©2013, Oxford University Press):

…from Middle High German lap(pe) ‘cloth’, ‘patch’, ‘rag’; a metonymic occupational name for a mender of clothes or shoes, or a nickname for a simple-minded person.

4.* Hostetler (Hochstetler, Hochstedler) – Of these two common spellings [Hostetler and Hochstetler], Hochstetler is wrongly considered by many people to be the German original. Actually, Hostetler is the older spelling, being found in Switzerland before the family spread out to other lands. Immigrants to Germany changed the first syllable to “Hoch”. 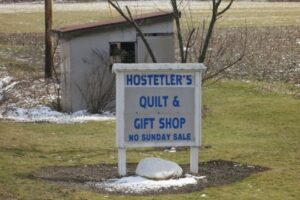 The ancestor of the Amish Hostetlers and Hochstetlers in America is Jacob Hochstetler (1704-76), who has become well known to succeeding generations through the Hochstetler Indian Massacre of 1757.

Again, here’s the Dictionary of American Family Names on the meaning of Hochstetler:

5. Stoltzfus (Stoltzfoos) – On October 18, 1766 Nicholas Stoltzfus with his two sons and two daughters landed at Philadelphia from Zweibrucken, Germany. This Nicholas Stoltzfus is believed to be the ancestor of all those bearing the Stoltzfus name among the Amish and Mennonites today. Nicholas purchased a plantation along the Schuylkill River near Reading, Pennsylvania. This he divided into five farms. The oldest daughter, Barbara, married John Schmucker, oldest son of the immigrant Christian Schmucker. The Stoltzfuses were hard workers and good managers, and prospered financially. Large families among them was the rule.

And finally, the Dictionary on the meaning of Stoltzfus:

Altered form of German Stolzfuss, from Middle Low German Stoltefoth, a nickname composed of the elements stolt ‘proud’ + vot ‘foot’, denoting someone of haughty gait; alternatively, from Middle High German stolzen ‘to limp’ + fuos ‘leg’, a nickname for someone who walked with a limp.