Short Stories from the Gray Family History, Part III: “Memories of my Parents”

This is the third and final installment based on the writings of my Aunt Edna “Ed” Ione Gray (1920-1997). Part I is entitled, “My First Trip to Florida–a Brief Encounter” and details an adventure that could have cost the young lady her life. The story ends with what she calls “A Divine Miracle.” It’s a “must read.” Part II, subtitled “Faith, Family, and Education,” contains a short biography, additional stories, and some creative writing, inspiring poems and reflections on life’s experiences. Part III contains additional stories that were expressly intended to honor her parents, Bertha Ione Campbell (1893-1980) and Paul Barton Gray (1892-1977). I say “intended” because it seems that her unexpected death at the relatively young age of 77 intervened, as death has a habit of doing at any age when we have other plans. Edna’s original title was, “A Memoir of Appreciation for the Lives of my Beloved Parents.” I have also provided the context for Aunt Ed’s other  compositions in the two earlier articles, but may I say that previous to posting this one that I made one last search through both her notes and my multitude of Gray family folders for anything that might connect Edna with her parents and the rest of the family, and what I found certainly enriched my appreciation and understanding of family history. Let’s begin with a short piece about what was perhaps her mother’s most prized possession from childhood into later adulthood: 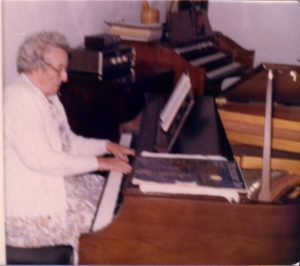 “The Piano: A Birthday Gift”

As the only daughter in a music-loving family, Bertha Ione Campbell was encouraged at an early age to develop her talent. At the age of eight, she began taking lessons on an old organ. Her teacher, Miss Annie Cook, was obliged to pump the pedals since Bertha’s short little legs could not reach the pedals. Her perseverance and dedications to the keyboard did not go unnoticed by her loving parents. On December 16, 1906, her 13th birthday, she was presented with a beautiful Kohler-Campbell, full-keyboard upright piano. This piano remained in the family through a third generation when Bertha’s granddaughter, Ellen Louise Pearce and grandson Larry Edsel Pearce took lessons. When the family moved to Coraopolis in the spring of 1960, the piano was sold to avoid moving the heavy instrument.

[This instrument was given to my mother when we lived in Cooperstown so that my sister Ellen could learn to play. Although a boy of 11, I soon took as much interest in piano music as my sister. This was the first piano that I ever played. Too large to move into our new house in Moon Township, the piano was given away and an Everett spinet was purchased to replace it. I continued to study the keyboard long after my sister quit. At age 16, I began to study on a large pipe organ at the Episcopal Church in Sewickley and sing in the Sharon Community Presbyterian Church choir. The choir director there added composition to my piano lessons, and eventually I was admitted to Indiana University of Pennsylvania as a music education major. Upon graduation, I was unable to find a music position so I earned a graduate degree in communication and spent the first half of my career in broadcasting. After that, and before teaching Rhetoric at the college level for the second half of my career, I substituted and filled temporary music positions in area public schools. Serving many local churches of all denominations as a substitute and full time organist and choir director, I now play regularly at St. Paul’s Presbyterian, in Somerset, on their century-old instrument.]

Here’s another touching story from Aunt Ed’s own hand, certainly especially for me because it involves my mother, Ruth, Edna’s older sister.

During the winter of 1915-1916 Dad [Paul Barton Gray] went to California by train with a friend. William Webber. Before leaving for the West he and Mother became engaged and planned a summer for June 1916, when he was scheduled to return from California. However, letters were exchanged and absence did make the hearts of both grown fonder. Dad returned in late February and the happy couple married immediately on March 8, 1916. It was a cold, windy, snowy day and Mother wore her going-away dress, a lovely navy silk with fine stripes and large navy hat of fine Milan straw with two large white ostrich plums. Because of the cold weather, her lovely white lace wedding dress was packed away for twenty-two years, to be worn by her first child, Ruth Elizabeth [Gray-Pearce (1917-2005)] on her wedding day, December 26, 1938. [Edna was Ruth’s Maid of Honor and Ralph’s brother Dale was his Best Man.]

Some Final Thoughts on “Mother” and “Dad”

Aunt Edna was always so thorough and emotional in recording her thoughts about her parents. I feel so privileged to be able to preserve and pass on some of her writings as a part of the Gray family genealogy. Edna wrote:

A family history serves to validate our lives–we search to find ourselves in the lives of beloved ancestors long dead. We live for a moment with loved ones of the past–we hold the world still and command the passing of generations to cease.

More often than not, Edna would mix or ground her thoughts in literary quotes and scripture. One of her inspirations was John Ruskin (1819-1900), who said, “There is no wealth but life.” Her scripture are the words of David in Psalm 102:

Our days are like a shadow that declines, and we are withered like grass. But Thou, Oh Lord, shall endure forever, and Thy remembrance unto all generations.

Another of Edna’s favorite authors was essayist Henry David Thoreau (1817-1862), famous for is two-year stay on Walden Pond. Above one excerpt she wrote a dedication of the lines to her father, a finish carpenter by trade: “To Dad, a builder, who ever strove for perfection and excellence.” Thoreau wrote:

I would not be one of those who will foolishly drive a nail into mere lath and plastering; such a deed would keep me awake nights. Give me a hammer, and let me feel for the furring. Do not depend on the putty. Drive a nail home and clinch it faithfully that you can wake up in the night and think of your work with satisfaction–a work at which you would not be ashamed to invoke the Muse. So will help you God, and so only. Every nail driven should be as another rivet in the machine of the Universe, you carrying on the work.

In 1980, Edna composed a short poem entitled “What is Life?” while walking in an early morning rain. Ever introspective, she captures how precious our time on earth is:

Life is–to be–lovingly aware
of God’s great world as it is today.
Each tiny insect that creeps or crawls,
each sparkling raindrop that gently falls,
are “His,” Divinely made by His own hand,
to fit His Plan–and serve His Masterpiece–Man

In 1981, she made these observations under the heading “The Four Seasons of Life”:

What is life? For each of us, life is an unending search for greater spiritual understanding–this understanding of the mystery of life begins and ends with our realization of the indwelling of Christ: “The mystery hidden for ages and generations, but now made manifest, which is Christ in you, the hope of glory” (Col. I: 26-27)

Where did Aunt Edna Gray get her sensitivity and and ability to communicate her feelings  in lines and verse? Remember the story at the beginning of her mother receiving a piano and studying music as a youngster? Surely her mother was a great artistic inspiration, although I don’t recall Edna being particularly musical or Mother Bertha doing much writing. I did, however, find a poem that Edna’s mother wrote after the death of Paul in 1977. Titled “In Memory of ‘Dad,'” it shows great emotion and literary talent:

“You are gone but not forgotten,” my heart within me cried.
If love could have saved you, you never would have died.
In life, I loved you dearly; in death, I love you still.
You left a place in my heart no one else could ever fill.
But you did not go alone, for part of me went with you
The day God called you home.

Perhaps love is the sentiment that surrounded Edna in her life and work, and that undoubtedly came honestly and naturally from her parents. I found among her writings very detailed accounts of the final moments with them when they died, too personal to share with you here. But, it is appropriate to close with a poem she wrote in 1977 after the death of her mother, which seems to say all that was necessary: “My Prayer for Mother and Dad.”

Hand in hand, on the shore they stand,
Looking Homeward to that Promised Land.
Mother, Love, and Dear Old Dad await God’s call to His Home above.

Dear Father, God, Great Master of all Life and Death,
Be Thou ever near as they watch and wait Thy call.
Come, Divine Master, in Thy infinite Love and Mercy.

Meet them and comfort them on this lonely shore of earthly life.
Go with them, Dear Master, as they embark on this Last Journey
To Thy “more stately mansions.”

Accept our grateful thanks for their long and faithful lives, and
Be with us all, Dear Father, as our grieving hearts
Seek to “rejoice and be glad” in our Lord who
“Doeth all things well.”

All this we ask in the name of our Great Master, Redeemer, and
Friend, Your Son and our Lord, Jesus Christ. Amen. 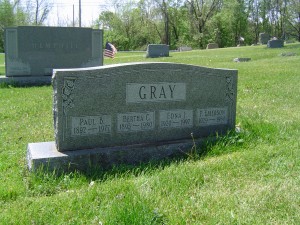 If you’ve read all three chapters of this collection of Edna Gray’s writings, I think you’ll agree that she was a gifted and unique woman. Whether reflecting on her life with pencil on tablet paper or verbally guiding her young nieces and nephews, she had a way with words. As we said before, If Edna had the advantages of modern higher education with its graduate degrees and opportunities for publication, in my mind she’d have a Ph.D. in Literature, be teaching at a top-notch university, and have published scores of poems, articles, and maybe even a novel. I’m so proud that I had a few short years to know her. Somehow, I hope that just a little of her talent has rubbed off on me. If you knew Edna and wish to share a story or ask a question, please fill in the comment box below, send it to me, and I’ll do the best I can to post your recollection or answer your inquiry.