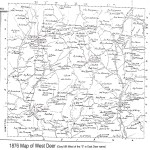 One beautiful day in May of 2003 my mother Ruth, brother Carl, Uncle Merle and Aunt Betty, and I met for lunch just north of Pittsburgh, in Gibsonia, then set out on a tour of our ancestors’ homesteads, churches, and burial grounds. Come along with us and let’s concentrate on our Campbell heritage.

We turned east off busy five-lane Rt. 8 onto two-lane Rt. 910 for several miles and then left onto 1 ½-lane Campbell Road. At the bottom of the steep, winding path-for-a-road lies a lush green gold course. Where the hillside meets a stream are shale banks, the home of some rather exciting fossils. This is what I, my brothers, and my mother’s brothers all remember about the “bottom.” The golf course used to be rich farmland until hitting a small dimpled ball became more profitable than planting small grains of seed. But, that was the neighbor’s decision. William James Campbell (1859-1954), my Ulster Scot descended great-grandfather, and his German-American wife Rachel Elizabeth Hoffman (1866-1946) farmed the rather rugged top of the hill overlooking the bottom as William’s father, Thomas Anderson Campbell (1837-1925), and mother, Jane Ross (1837-1890) had done before them. As we said in “The Descendants of Thomas Campbell and Mary Crawford,” Thomas and Jane had lived with her parents, also successful farmers who were perhaps connected to the historic “Old Ross Mansion” off Rt. 28 near Harmerville [mentioned in Smith and Swetnam’s A Guidebook to Historic Western Pennsylvania], until the birth of their only son, William. The farm we toured was originally the 95-acre homestead of fellow Scotsman George McIntyre but stayed with our family until just before William Campbell’s death in 1954. My mother Ruth spent her late teens caring for her grandmother there and helping with the chores around the farm until her marriage in 1938. For stories about those days see “Memories of My Mother, Ruth Elizabeth [Gray] Pearce: Part II” and “Additional Recollections of My Great-grandparents William & Rachel.”

As if Campbell Road isn’t steep enough, the driveway to the farm rises even more steeply between the house and the barn. Both buildings have been extensively remodeled with expansive decks and fancy doors. The main “crop” today on what is known as “The Green Tree Farm” is horses, but in the Campbell days the cash crops were eggs, potatoes, vegetables, and fruits. William and Rachel’s sons Raymond, Clifford, and William would sell these to customers in and around Pittsburgh, including along “The Strip” in Lawrenceville’s wholesale produce markets. In the earlier days, this involved horse and wagon and later automobile and truck, but in either event, crossing the high bridges over the Allegheny River. For an interesting look at our early Scotch-Irish farmers see “The Lifestyle of the Campbell Farmers.”

My mother Ruth remembered Dr. Halstead of Bakerstown coming to the house to vaccinate all the grandchildren when they visited. He would drive as far as the Campbell farm, have the youngsters sit in rows on the front steps, then give them their shots. When he was done, she says, he would pray over them, as he did with all his patients. She also remembers that her grandfather was never sick, but he would take naps sitting in his favorite chair. Maybe that’s why he lived to be 95-years old. By the way, Mother said that she used to take her naps on the parlor floor. Maybe that’s why, at this writing, she was still going strong at 86.

Life with “Billie” Campbell, as he was known throughout the community, was interesting, to say the least. Mother remembered her grandfather’s two milk cows, Rosie and Daisy. One of her jobs was to milk them, churn the cream into butter, and store it in a container in the ice cold spring water that ran year round in their basement. Her grandfather used to give her five-cents a dozen to pick potato bugs, a job that she didn’t particularly care for. At that price, who can blame her? She also remembered the grandchildren hurrying through the chores after supper so they could listen to the Amos and Andy radio program that came on at 7:00. She especially liked to stay up after that to hear Bing Crosby sing, but that meant she had to keep the radio very soft so as not to wake her grandparents.

According to Albert Allison, caretaker for the East Union Cemetery, people at the church thought it was “something” for Billie Campbell to walk up the hill to get the mail each day at the box along Saxonburg Boulevard well into his 90s. His grandson, Merle Gray, claims that William, barely five-feet tall, had an old stump near the barn where he could get up on his horse when he didn’t feel like walking to get the mail.

After a stop at the house, with no one home, our car continued its ascent around ponds teeming with life and between split rail fences, all well-maintained, to the top of the hill. Another member of the Green Tree family, also in the insurance business, has built a very large house there. This beautiful hilltop vista that once a meager lifestyle for two generations of Campbells now borders on opulence. Property that probably transferred as wilderness to our family for hundreds of dollars around the time of the American Civil War, today would sell for millions as a bedroom estate to the prosperous city of Pittsburgh.

As we return to Campbell road and proceed toward the northeast, we pass some wooded hillside acres that we’re told once belonged to William’s son, Raymond. At one time he thought he’d build a home adjacent to his parents, but that never happened and the land was sold.

We cross Saxonburg Boulevard and head for East Union Presbyterian Church, the home congregation to the Campbells. It was begun in 1850 by Scotch-Irish families from the nearby Deer Creek Reformed and Bull Creek Presbyterian churches. For further context on these times and my Gray ancestors see “The Rev. Abraham Boyd and the Bull Creek Church.” We know that each Sunday before the advent of the automobile, William and Rachel would take their family to this “Church on the Hill,” as it was called, up and down small mountains on narrow winding road, in horse and buggy. Later, of course, they were faithful by car. Then later, when William and Rachel could no longer drive, son Clifford would come out from Pittsburgh and take them to church. No doubt the Campbells were faithful in their stewardship as well. One son, Uncle Bill, was “instrumental” in obtaining one of the first organs at East Union. We’re told that he also contributed greatly to a replacement instrument.

In the sesqui-centennial book, produced on the recent occasion of the church’s 150th anniversary, there are several interesting references. First, a Guy Campbell, who was named after one of the early pastors, became somewhat of a war hero in WW II. We don’t know if there is any relation to us. Second, The Rev. Howard M. Bruce, who served the church from 1923 until 1943 when he resigned to join the Army in WW II, was the pastor who married my parents. One interesting story still lives about his lapse of memory regarding my father at their wedding. He continually referred to Ralph as “Harry” throughout the ceremony, which was held at the manse on a snowy December 26, 1938. Until Mother and Dad renewed their vows in 1988, Dad claimed that he was “never really married.”

Just across the highway in front of the church, which leads to Tarentum, is the East Union Cemetery. Under a large yew in the very front rest William James and Rachel Elizabeth Campbell. As their ancestors, buried at the Pine Creek and Mount Royal Cemeteries near Fox Chapel, their graves are easy to find. Campbell is not an uncommon name to Western Pennsylvania and there are many graves, but our Campbells’ lots seem to be well taken care of. Although the computer listing for East Union Cemetery has several other family-related surnames, such as Crawford and Huffman [sp?], one of the largest family gatherings there is Campbell. I am placing the names (alphabetically) and vital statistics I am certain we are related to first:

These are the Campbells I am unable to connect to at this time:

Our day of touring was very successful and fulfilling. I hope that you can take time to honor and know your ancestors, and I hope that this information will come in handy. As always, any additions or corrections to the above will be appreciated and will be included in our next revision.