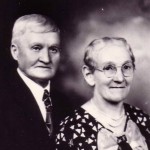 I proudly wear the wide wedding band of my Great grandfather William James Campbell (1859-1954) who married Rachel Elizabeth Hoffman (1866-1946). My mother Ruth Elizabeth Gray Pearce (1917-2005) had been given the solid 18-karat gold ring (1) upon William’s death. She had been the live-in caretaker for her grandmother Rachel from the time she was fourteen until just before she married my father in 1938. Most of what I know about life on the Campbell farm during the Great Depression came from stories my mother and her cousin, Helen Johnson (19 -2007), told me and are available as MSWord documents at “Memories of my Mother: Part II” and “Memories of my Great-grandparents.” Additional tales of the sometimes hazardous visits by the Gray children to the Wcst Deer homestead can be found in a transcript of a eulogy written by me for my mother’s funeral: “The Scars of Sainthood.” But let’s begin with a word about Rachel’s parents, George and Annie K. Brown (2), about whom we know very little, consider their possible origins, and end with the names of possible relatives in the Pittsburgh area.

George and Annie Hoffman lie beneath a beautiful big memorial stone at the northeast corner of St. Paul’s Lutheran Church atop Flagstaff Hill, originally called Sugarloaf, in what is now North Park, McCandless Township, Allegheny County, PA. Unless these supposed poor farmers (3) dedicated quite a bit of money to their grave marker, my guess is that family replaced the original headstone in recent years. Just on the other side of the church are dozens of tombstones engraved in the German language, which suggests a small society there, north of Pittsburgh, that spoke the old tongue and probably preserved the traditional “Dutch” ways (4). One source lists a Hoffman farming just north of the Richard Pearce farm along Pearce Mill Road, at the foot of Flagstaff Hill where Lake Marshall and the North Park Skating Rink sit today. Across the road is Miller Grove, and early platt books and deeds assign the acreage to the Miller family. Was this, like our Pearces and Austens, English Millers or German Muellers? If the latter is true, George and Annie could have felt right at home, even renting. But, that is Pine Township, not West Deer, so our research continues.

The Hoffman name can have several spellings, Huffman, Hoffmann, etc., but according to Genealogy.about.com, the meaning is the same: A nickname for a farmer who owned his land rather than rented, from Middle High German “hofman,” meaning person working on a farm. How appropriate! On the other hand, Searchforancestors.com believes the name is more genuine Dutch, from Hoofdman, a captain, a director, head or chief man. Hofman, from Hof, a court–the man of the court. At this point, we can’t be sure that this origin is appropriate to our George. Ironically, almost half of the sources Googled refer to Jewish roots for the Hoffman surname in Eastern Europe. Here then are some famous Hoffmans, most of whom you’re familiar:

Dustin Hoffman (b. 1937) actor best known for quirky roles in Rainman and Tootsie.

Alice Hoffman (b. 1952) American novelist and author best known for her book of quotes.

Philip Seymour Hoffman (b. 1967) Actor and director for stage and screen.

Harold Hoffman a number of persons with this name, from a neurosurgeon to governor to judge, all interesting and successful people.

The Hoffman Process (1967) named after an institute, this psychological training claims to improve every aspect of your life and love.

A visit to the Hoffman Family genealogical forums quickly turns up many early Hoffmans, including Georges, on the North Shore of Pittsburgh, not far from West Deer Township. It’s evident that a large population of German-speaking people settled there in the early 19th century. The Hoffmans buried in the Voegtly Cemetery in Troy Hill may be the ancestors and relatives of our George. But one webpage named for the Bryson Family reveals a George Hoffman who fathered a Louis H. Hoffman (b. 1856) who married  Margaret Elizabeth Jane Bryson (1862-1919) of West Deer Township. Still another George was born in 1828, the same year as our George, in Mifflin County, PA. He died in Columbus, OH, however, so we assume that he settled and is buried there, but maybe not.

We continue to research the George Hoffman ancestors and will report our findings at this site. The most interesting thing to me is that they represent the only German blood in my veins, one-eighth by count. Because of my marriage to Susan, my children are more than half German, nine-sixteenths by count. If nationality traits are accurate, the German determination added to the Scots-Irish individualism can add up to some real “bull-headedness.” Fortunately, my father’s English genetics has tempered the mix with reason and calm. Genealogy is more than names and dates. The best part are the narratives that live on, often through oral tradition, revealing perhaps the nature and thinking of our immigrant American families.

1.Family tradition says that young William, when he knew he wanted to marry Rachel, purchased a nugget of raw gold and had a jeweler make the keepsake. Their initials (WJC & REH) are carefully preserved beside Susan and mine (LEP & SKM) inside the perfect circle.

2.Annie (1829-1890) was the younger sister of Elizabeth K. Brown (1824-1916) who married my mother’s paternal great-grandfather, Dowling Norris (1823-1858). With these marriages, the sisters became “42nd cousins,” not that unusual in the days when a variety of the opposite sex could be scarce. By the way, both Annie and Elizabeth’s middle initials are “K.” We believe that at least one could stand for Katarina, but we don’t know for whom it represents.

3.Memoirs of Allegheny County, in a brief biography for son-in-law William Campbell, claims that his wife Rachel’s parents were farmers in West Deer Township, which is some distance from where they are buried at St. Paul’s Lutheran Cemetery, McCandless Township. However, beyond that, the nearest German communities and Lutheran Churches could only be found closer to Pittsburgh. The North Hills in those days was the land of the Scots-Irish and English.

4.My mother was well-known for her authentic Scotch sayings and superstitions, but I didn’t realize how much Pennsylvania Dutch she used until I met my wife Susan, whose grandmother was Amish, and learned their expressions and habits.