Our Campbell “Cousins” & Other Interesting People

Scottish Campbell dress tartan (one of more than thirty)

Back in 1996, several dozen descendants of Thomas (1806-1848) and Mary Crawford Campbell (1799-1886), “cousins”1 if you will, met in a wonderful family reunion. Our pioneer Thomas had emigrated, alone we believe, from Northern Ireland in 1828 to be with family and friends in Western Pennsylvania. Much of this history is recorded in an earlier article,“Introduction: Campbell” and other accounts. The purpose of this piece is to relate some fascinating bits of information collected by the organizers of that family reunion, who are listed in the footnotes.2 We’ll start with Patty Meeder and the famous folk she met while a librarian at Princeton. Then we’ll move to Florence Stucki and her marriage to an accomplished American industrialist. We’ll hear about cousin William Jennings Campbell,3 whom H.J. Heinz honored with the unofficial title of “Tomato King.” Finally, we’ll honor the memory of cousin Joan Campbell Ganley, who passed away just last summer in her ninetieth year. She and husband Bernie each served their community and higher education for decades. If you’re a descendant of one of these Campbells, please contact me in the block below and I’ll share whatever information you can provide.

Let’s begin with our cousin, Patricia Jane Millheim (1923-2012), great-granddaughter of Thomas and Mary Campbell, who married Donald E. Meeder in 1949.4 After graduating (Cum Laude) from Waynesburg, Don and Patty married and headed off to Princeton, NJ, where Don was enrolled as a seminarian. After being ordained, Don served churches for 40 years in Ohio, Pennsylvania, and Florida. But this paragraph is about Patty and her “interesting” life as a pastor’s wife. She always had a love of education and, in particular, books. Before marrying, she had volunteered at public school and college libraries, and that position was to serve her well. While Don was studying at Princeton, she was working in the University library. She tells of just a few of the “important” people who visited there from 1949-1951. She met, and in some cases shook hands with the following:

–Albert Einstein, scientist and developer of the atomic bomb, who worked and taught in the Institute for Advanced Study (IAS) at Princeton. Patty remembers how he would come to her desk, lean over, and greet her with, “Gutten morgan” (good morning) or “Gutten tag” (good day), and start a conversation (in broken English, of course).

–Thomas Dewey, former Governor of New York who had lost his presidential bid to Franklin Roosevelt in 1944 and to Harry Truman in 1948.

–George C. Marshall, Five-star General, Nobel Prize winner, Time magazine Man of the Year, former U.S. Secretary of State and Defense, but most notably organizer of the Marshall Plan that helped Europe recover after WW II. Marshall was born in Uniontown, not far from Patty’s hometown of Natrona Heights.

–Haile Selassie, Emperor of Ethiopia. Patty remembers him as “small in stature and very regal.”

Of course, there were others: Mohammed Reza Pahlevi, Shah of Iran; Judge Harold Medina, held famous conspiracy and treason hearings. (Patty remembers that his daughter was married to actor Joseph Cotton); Vijaya Lakshoni, first woman head of the United Nations and related to both Gandhi and Nehru; and William Albright, who worked with and called the Dead Sea Scrolls, “The greatest archaeological discovery of the 20th century.” These are only a few of the interesting persons Patty met while at Princeton.

After husband, the Rev. Don, began his long ministry, wife Patty Millheim Meeder began her accomplished career, teaching workshops and church schools, holding church offices, and serving as many as three Presbyteries as a “Teacher of teachers.”5

Our next interesting person is Arnold Stucki (1862-1948), in this case cousin-by-marriage, born in Switzerland and  husband of Florence Henrietta Campbell (1873-1952).6This short narrative begins with the founding of the Standard Steel Car Company, of Butler, PA, in 1902 by Arnold’s son-in-law by his first marriage, John Hansen. The last half of the 19th century had seen the great increase in steel production and railroad transportation in America. With the backing of none other than Andrew Mellon, the 29-year old Hansen established a new freight car production plant and hired the famous “Diamond Jim” Brady as his Vice President of Sales.

Arnold Stucki was the company’s Chief Engineer, and he traveled the country with Diamond Jim, spending much of their time in New York and Chicago. In a biography written by Arnold’s grandson, William Hansen, Brady is described as, “a lavish entertainer who threw extravagant parties for his customers and actually gave away diamonds to the wives and girlfriends of his railroad guests.”7 While this was going on, Arnold was back in his room doing all the technical designing and negotiating with the customers’ home offices.

The other work that Arnold was doing was the study of various freight car side bearings, the devices that allow loads to be transferred efficiently between cars and or cars and docks, what’s called “dynamic control.” In 1911, Arnold started his own enterprise, A. Stucki Company. With offices in downtown Pittsburgh, the firm manufactured bearings, all locally, for about 50% of the 150,000 freight cars built between the World War I years of 1914-1918. Arnold’s first wife died in 1921, and in 1925, he married Florence Campbell, eleven years younger, a Slippery Rock graduate, and public school teacher on Pittsburgh’s North Side. 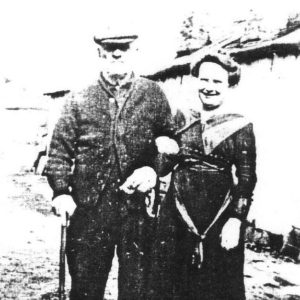 Florence lived with her two sisters, one a seamstress who never married and the other who taught with Florence and eventually married a graduate of what is now Carnegie Mellon. He was a  successful electrical engineer with his own company. We believe that Florence and Arnold met through one of her sisters’ professional husbands. The genealogical sources for the couple reveal passports and ship registries for Europe, South America, and Hawaii. Some of the trips were business, some to visit Arnold’s family back in Switzerland, but surely always, pleasure was in order. Spending many winters in Florida, the Stuckis often travelled in the private rail car of the General Manager of the Pittsburgh & Lake Erie Railroad (P&LE).

Once back home, Arnold and Florence could often be seen driving about in their luxurious Pierce-Arrow. Arnold passed away in 1948 at the age of 85, no doubt still sporting that Swiss-German accent, not unlike another famous Arnold. Florence died several years later at age 79.

A delicious symbol known ’round the world

This paragraph of interesting persons includes several generations of our Campbells and their association with a family name especially prized in Pittsburgh for football and around the world for food.8William Jennings Campbell, Sr. (1904-1997) was the fourth generation after Thomas and Mary and son of William Oliver Campbell (1868-1939), whose biography is recorded in Memoirs of Allegheny County. As was often the custom, and necessity, in those days, William Oliver quit school at age fifteen to help his father on the farm in O’hara Township. Within a few years his father retired and the younger William split the land with his brother. The main crop raised there was tomatoes, and they went directly down over the steep hill into the Sharpsburg plant of H.J. Heinz.9Father William Oliver Campbell owned the farm at 250 Old Mill Road in what is now the affluent northern suburb of Pittsburgh known as Fox Chapel.10 According to his granddaughter, William and his sons William Jennings and Lawrence would start 18,000 to 20,000 tomato plants in the spring of each year. When the ground reached just the right temperature, they placed them in the ground with a bed of straw around each plant to keep the tomatoes clean as they developed. In the late summer and early fall, before the first frost, the ripe red fruit was carefully picked, placed into baskets, and delivered down to the H.J. Heinz plant along the Allegheny River to be made into the world-famous ketchup and other tomato products. She says that her Granddad William Oliver became known as “The Tomato King” of Allegheny County because of the quantity and quality of his produce. 11

Finally, I count my times with cousins Joan and Bernie Ganley of Indiana, PA, a wonderful honor. Born Joan Vivian Campbell (1927-2017), she graduated from what is now Indiana University of Pennsylvania with a degree in education. My wife and I each hold similar degrees from that same institution. While in college she competed in both swimming and archery. She served both the Girl Scouts and several sororities. Joan taught home economics many years in both public schools and at the University. It was at IUP where she met a handsome young man of Irish descent, Bernard Ganley (1921-1999). “Bernie” was also a teacher, but he also coached and counseled in several local public schools before beginning his 20-year career at IUP. In addition to working as Dean of Men and coach of football and track, he was probably most honored in 1968 for coaching the men’s golf team to a national championship, the highest such honor for any of the school’s dozens of athletic teams thus far. 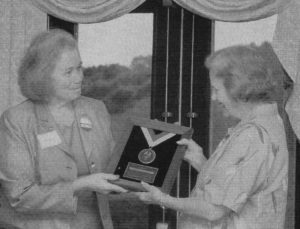 Eventually, Bernie was promoted to administrative assistant to the President of the University, which led to serving as interim president in 1979, the only alum or ad assist to ever do so. After he retired from IUP in 1981, Bernie accepted the position of President of nearby Mount Aloysius College, where I served as an adjunct for 21 years. He was admitted into the University’s Sports Hall of Fame in 1996, just three years before his passing. In additional to being kind, hard working, and extremely intelligent, Joan and Bernie were always very active. They retired to the West Palm Beach area of Florida to be near the water and play golf. Bernie worked part-time at the PGA  headquarters there and encountered many of the world’s most famous golfers, including his neighbor from Western Pennsylvania, Arnold Palmer. 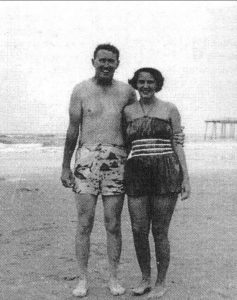 Wife Joan stayed busy right up to the end with church and correspondence. As I said, she was always kind and considerate to Susan and me, and we miss her dearly.

In conclusion, the stories of our Campbell cousins, their spouses, and many of the people they’ve worked with or encountered over the last several centuries have left us with a rich heritage. I’m sure there’s lots more where that came from, and our research continues. But, as we said in the opening paragraph, you may have a tidbit that will interest our readers. Please send it along via the comments box below. If it contains something of a personal nature, just indicate and we’ll be as discrete as possible, probably contacting you for clarification before anything is posted. That’s how we can preserve these precious and interesting moments for posterity.

“The History & Genealogy of the Descendants of Thomas Campbell.” Unpublished, 1996