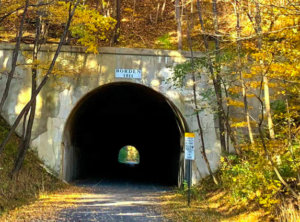 I’ve been enjoying trikes and bikes for as long as I can remember. Most were “handed down” from older brothers and my many uncles. My appreciation began at perhaps age three when a tricycle was ridden in the open garage in the summer and the closed basement in the winter. We never had a paved driveway until we moved from the country to the suburbs before junior high. I do remember getting my first “new” bike, with training wheels, around the age of six, though. The day those “kiddie braces” came off was the day I was riding in the garage, shouting to my brother something like, “Look, I’m on my own.” About that time I went crashing into the wired cage my day had set up for our baby chicks. They went flying – I went flying – no one any worse for the wear. I felt like I had finally reached maturity.

A few years later, my Uncle Lawrence (nicknamed “Doc” because he was named after his obstetrician, but he also got “Larry,” and I only inherited that moniker) went off to the Marines and gave his 26-inch, one-speed bike with friction brakes to my brother Paul (incidentally named for Doc’s dad), who was off to Penn State. Paul rode it all over State College, and while in Air Force ROTC, painted it high visibility orange. Guess who got that bike when he graduated, married, and went off to the military the same day? I rode it with pride for probably 20 years, after I had married and Susan and I found newer, free “give-away” bikes in front of a neighbor’s house. The older bikes were donated to a bike shop to be remodeled and also given away.

This brings me to the the time of our latest acquisition, the newest means of pedaling, riding, and stopping: Susan bought each of us bikes with seven speeds, shock absorbers, and dual handbrakes. The approximate multiple occasion was our retirement, Golden wedding anniversary, and discovery of the nearby Great Passage Bike Trail from Pittsburgh to Washington, D.C. We have gone over nearly half of that, in stages of course, and we’ve found other local rails to trails with more being developed every year.

Riding the the bike trails keeps us healthy, mentally and physically. The activity has brought us close to each other, friends and family who may accompany us, and our faith in God who provides his people with many wonders of nature and miracles of life. I remember doubting I would ride again after a hip transplant three years ago. I found that riding was more comfortable than walking in many instances. On the trails we have made new friends and seen almost every animal common to Northern Appalachia, not to mention some amazing human technology, from bridges to tunnels to the ability to transport people up and over the mountains via the mild grades. I’m reminded not only of the many wild creatures mentioned in the Bible, but the technology that the ancient Israelites must have helped the Egyptians with and later the construction of Solomon’s Temple. The roads and trails of the Bible were the lifelines of our forefathers in faith. The boats and buggies, the predecessors of our modern transportation technology.