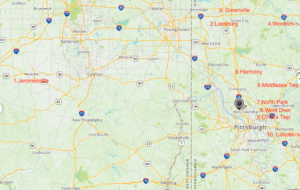 5. Harmony, I-79, Butler Co. – Original home of Pearce Woolen Mill, America’s oldest blanket factory founded in 1804, after purchase from Harmonites (Harmony Society) in 1864 by banker and our uncle, Alfred Pearce (1816-1895), and his brother John.

7. North Park, Pearce Mill Rd. & Babcock Blvd., Allegheny Co. – Original settlement of our Pearces in 1820 and birthplace of my father, Ralph Hill Pearce (1917-2002). Our land was taken by eminent domain in 1927. Take a virtual tour of North Park family sites.

8. West Deer Twp, Rt. 910, Allegheny Co. – Farm settlements of grandparents Campbells, Grays, and Norrises mostly after a treaty with Native Americans and moves from the East in the early 19th century.

10. Latrobe, Rt. 30 – Third home of the Pearce Woolen mill along the Loyalhanna River after 1904. The building still stands. Also former site of the Rolling Rock Brewery and birthplace of Fred Rogers and Arnold Palmer. The Pittsburgh Steelers train there.

As our research continues, both online and in person, we hope to add to the above map to include such dignitaries as Uncle McLeod M. Pearce (1874-1948), the late President of Geneva College on the banks of the Ohio River in Beaver Falls, PA. He has a spacious men’s dormitory named after him, and his father William constructed the grand administration building. Check back for new stops on our historical and genealogical tour, and please comment below or e-mail me with your impressions of these locations and ideas for additional coverage.