From an unpublished family history & directory for
the Annual Krause Reunion
Compiled by Hilda E. [Krause] Miller and others in 1986
With comments by
Larry Pearce
June 17, 2003 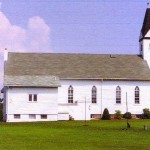 I remember in 1989 driving through the tiny Bavarian village of Oberammergau, the site of the famous passion play, when my son Matthew was an exchange student to Germany. I thought it strange to learn that the ancient monasteries in that beautiful land supported themselves by brewing and selling beer. But, the other thing that caught my eye was the name on the local Daimler-Chrysler dealer sign: Krause. This was the maiden name of Hilda Miller (1921-1997), my mother-in-law and one of the authors of this transcription. It literally means “curly,” as in hair. Several of the surnames on my side of the family have similar kinds of references to the face: “Beard” is obvious; “Gray” for hair or beard; and “Campbell” for wry or crooked mouth. But, according to the information we are about to consider, our Krauses lived further north, in what was known as Evangelish Paderborn Westfallen Prussia, and emigrated through the frigid port of Bremen sometime in 1871.

Most of this genealogical work was presented to the Krause Family Reunion which has been held each year at either the Grantsville Sportsmen’s Club or the Lutheran Church pavilion in Cove, MD. It represents many years of collecting data from family, churches, cemeteries, and public documents. In the Preface, Hilda E. Miller reflects on her regrets, so common to all genealogists:
To the Ferdinand Krause Family – As I think about this book, there are many unanswered questions which I should have asked when my parents were still living. Working on this book, I wanted to be as nearly correct as possible, so it would answer some of the questions our future generations will ask. This book is filled with happiness, joy, sorrow and suffering, pain, anger and disappointments, which make up a lifetime of living. To some, this life was very short, and to others it extended far into the years. What you make of your life depends solely on you. This choice was given to each of us. With love in our hearts, life can be most wonderful. With hate, it can turn into a life of misery, hurting all of those whom you know. If this book continues, it is my wish that it be filled with more happiness and contentment for our future families. May their lives be molded around the ideas that this country was founded on: freedom of religion and trust and respect for each other.

To each of you who worked so hard to get this material so the book could bemade up, I give a great amount of praise and thanks. It is no easy job collecting all the facts. Each year this book can and should be updated by each one bringing new facts to our Krause Reunion to be entered into it. Pictures too can be put into this book as well as little short stories (humorous or otherwise). It’s your book, so make it as interesting as possible. When you find mistakes, correct them with love. I am not perfect. Thank you. HEM.

So, what follows is a simple summary of the Krause family. In the future, I will include the complete, updated genealogy as well as the photos and documents available.

Carl Ferdinand Krause was born in 1840 in Prussia, which before World War I was the northeast portion of modern Germany with Berlin as its capital. According to Hilda’s brother Clyde, his parents were Ludwig Wilhelm Ferdinand Krause, born probably before 1818, and Friedericke Hilcken, birth date unknown. They were married in 1839. We believe that they remained in Germany while their son Carl and at least one sister came to America. Carl’s sister, Ernestine, had come to Baltimore and wrote to him for money. We don’t know if he obliged, but he apparently never heard from her again after that brief exchange. Nothing more is know of his ancestors at this time. Carl married Margaret Georg of western Maryland in 1872. Their first child, George was born the following year. They produced four more children, John, Amelia, William, and Elizabeth, before Carl’s citizenship papers were filed in Garrett County, MD, in 1882 at the age of 42. [See Photo Album: Krause for documents.] He had come to America in 1871 [probably also landing at the port of Baltimore]. He swore allegiance to the United States and renounced forever “all allegiance and fidelity to every foreign Prince, Potentate or State sovereignty whatsoever, and particularly to King William of Germany.” Just how much English he spoke is unknown, but all of this government paperwork was, of course, in English. Two years later, on January 20, however, the sixth of eleven children was born to Carl Ferdinand and wife Margaret. He was my wife Susan’s grandfather Charles Frederick [though records called him Karl] and he was baptized February 17 at St. John’s Lutheran church of Cove, MD. That document [as well as a confirmation certificate for a Carl Ferdinand Krause born January 20, 1884 – another clerical error?] was in German, an indication of the ethnicity of the settlers in western Maryland at that time.

As we indicated above, Carl Ferdinand’s wife was Margaret Georg (1856-1941), some 16 years younger than he. They managed to farm a beautiful, deep and secluded valley just south of the National Pike, now U.S. Rt. 40. Present day Rt. 219 overlooks the scenic homestead and church as it stretches from the intersection with the unusual name, Accident, south into West Virginia. Carl and Margaret had five more children after Charles: Mathilda, Ferdinand, Walter, Ernestine, and Rosina.

Margaret was the daughter of John Georg, born in Baron, Germany, in 1821, and Louisa Smearman Georg. We know that John was one of three brothers who came to America as boys and that Louisa was also of German origin. Carl and Margaret and the Georgs are all buried at St. John’s in Cove, MD. Margaret had a brother and a sister, and the three children together produced 34 grandchildren for John and Louisa. As if that wasn’t enough, upon the death of Louisa, John remarried [Kathleen Fisher] and they produced another 9 children.

Charles Frederick Krause (1884-1973) worked the Cove farm with his parents and 10 brothers and sisters until about the age of 24, when he met an Amish girl just up the road and over the state line in Springs, PA. Annie Lee (1885-1971) knew that she’d be asked to leave the sect if she accepted the marriage proposal of the Lutheran lad from Maryland. But, contrary to some Amish groups, Annie’s did not shun her for doing so. She was free to go with her husband to make a new life after they married in 1908. Together they produced eight children: Ernest, Harry, Floyd Alton, Clyde, Olive, Ralph, Hilda, and Lawrence. We know that Clyde was born in Berlin, PA, in 1915, so the family apparently still lived in southern Somerset County for a time. Eventually, however, the family accepted the position of manager of a 177-acre farm and camp in Jennerstown, now called Pine Springs, northern Somerset County. Ironically, the owners were neither Lutheran nor Amish, but Presbyterian. The Presbyterian Farm of the Presbytery of Blairsville, originally deeded to the church in 1902 by Mrs. Isabella Coffin, is described in a brochure as follows:
The farm is located at Jenner[s]town, PA, where the Johnstown-Somerset Concrete Road crosses the Lincoln Highway. It is a beautiful farm sloping toward the south, and in its palmy days was one of the most desirable in Somerset County. On it are four springs and two wells, while Picking Run, a well know trout stream, flows through the meadow below the barn.

Mrs. Coffin was born there in the brick farmhouse, which has a fireplace bearing the date, 1819. The magnificent barn is also still standing, and she had a cottage built nearby for “special use of W.A. Coffin, the talented New York artist, who spent his summers there.” We’re not sure of their relationship, but at one time the cottage had a 16-foot ceiling with a window on one side that extended from floor to ceiling. Shortly after 1922, when the Presbytery took over the farm from the Coffin heirs, a log meeting house, complete with working fireplace, was erected “as a memorial to the early Christian pioneers.” Charles Krause, and no doubt his young sons, were instrumental in constructing that unique chapel, which is still used for camping and church picnic vesper services. The total cost of the log meeting house was about $3,500 and symbolic logs ranging in price from $5 to $100 were sold to meet the expense.

The primary crop at the farm was potatoes, but hay, corn, and other crops were also harvested. The enormous maple trees along the drive and property line have provided many gallons of “sugar water” to area collectors over the years. The sap is boiled into delicious Somerset County maple syrup each spring for sale across the United States. Just across the Johnstown-Somerset Pike in the 1930’s were the beginnings of a professional theater company called the Gristmill Theater, now known as the Mountain Playhouse and Green Gables Restaurant. Under the leadership of the Stoughton family, Grandfather Charlie helped remodel an old barn along a newly constructed lake, which today has official Pennsylvania State Historical Association certification. The professional theater, elegant restaurant, and art gallery still attract audiences from as close as Johnstown and as far away as Pittsburgh.

There was always hard work around the camp and the farm, but when the chance came for Charles and Annie to purchase a farm of their own on the other side of U.S. Rt. 30, they jumped at the chance. Their primary activities there centered around a dairy herd and commercial milk sales. Across the road from this farm was the old Somerset County Fair Ground, which was to become the Jennerstown Speedway, home of NASCAR racing. Later, their descendants ran an ice cream stand and fruit market. The Ice cream stand is still operated by family members. Charles and Annie worked the farm well into their 70’s with the help of son Harry and his sons, who sold it to Charlie and Annie’s youngest son, Lawrence, a successful home builder in Johnstown. He in turn sold it to a family for whom it still successfully produces hay and corn.

Mom and Pop Krause, as their many descendants affectionately referred to them, eventually moved in with their daughter and son-in-law, Susan’s parents Hilda and Richard Miller. Mom died in the winter of 1971, and I remember my pregnant wife taking the bus from snowy State College, where I was a graduate to student, to Altoona, and then the train to Johnstown to attend her funeral. What a sight it was to see some of her old Amish friends and relatives at the commemoration. Pop lived until the fall of 1973 and was able to see our daughter Annie, named after his beloved wife of 65 years. Charles and Annie are buried in the Lutheran Cemetery within sight of their Jennerstown farm. So it was that their marriage represented the best of the old and the new. From roots as deep as the Old World, they brought progress and prosperity to this part of Somerset County in which we now live and to which so many people from across the country come to enjoy.