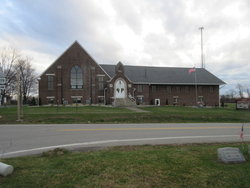 Robert B. Hill, aged 84 years, one of the most respected citizens of Leesburg, died at his home there on Thursday, May 1. Although his health had been failing for several years, the end came suddenly, following but days of illness. Mr. Hill was appointed postmaster at Leesburg by Abraham Lincoln just after the appointee’s 21st birthday and served in that capacity until the rural delivery routes were established with the exception of the the Cleveland term. Mr. Hill was born at Springfield Falls, Springfield Township, the son of William and Sarah Hill, moving with them to Leesburg, where the father engaged in general store business. In this business Mr. Hill was associated with his father until the latter’s death in 1875, when his son took up its management. Of late years the business has been conducted under the name of R.B. Hill and Son, rounding out a continuous existence of 75 years.

Mr. Hill served 90 days during the Civil War, during which time he contracted an ailment that annoyed him for the remainder of his life. He was one of the few remaining members of the Leesburg martial Band, only three of whom survive. Draping his casket was the silk flag that proudly waved through many years on patriotic, solemn, and festive occasions. He made his home in the same residence for nearly 60 years. Much could be said of the beauty of his character, the simplicity of his life, and his Christian virtues.

Funeral services werre conducted Saturday by Rev. S.A. Kirkbride, of New Wilmington, at the Leesburg Presbyterian Church, of which Mr. Hill was a member for more than 60 years. Interment was made in Leesburg Cemetery.