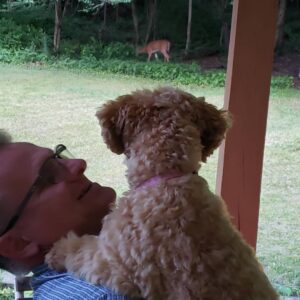 Rev. Dr. Tony Myers & Penny spotting a deer grazing from our back porch

My experience with the Pennsylvania White Tail Deer includes admiring, hunting, preserving, all of which began through the lives of my brothers and uncles. My habitat has been West-central PA, from the North Hills of Pittsburgh to the Laurel Highlands of Somerset County. For this meditation, let’s begin with scripture and see how that relates to my experience.

It seems that deer in the Bible were a symbol of peacefulness and plenty. I Kings 4: 22-23, the first mention of deer here, lists the provisions that King Solomon would send out with his large army for just one day: “300 bushels of fine flour, 600 bushels of meal, 10 fat oxen, 20 pasture-fed oxen, a hundred sheep, besides deer, gazelles, roebucks, and fattened fowl.” The fat oxen provided both meat and cooking oil, but the pasture-fed were surely healthier by today’s standards. While the gazelles were smaller, faster, and harder to catch, no doubt the deer were more plentiful, and the male roes assured that the females kept birthing. This was definitely a mighty army on the move.

In Psalms 42: 1, King David has his choir director “thirsting for God”, saying in surely the most familiar passage on deer, “As the deer pants (or ‘longs’) for the water brooks, so my soul pants for You, O God.” The irony for me here is that I was taught, as a young hunter, to look for this peaceable game animal drinking from a water source. Often one might find an entire herd down near a stream. Another natural tendency is for a wounded deer to seek out water to replenish a loss of blood. Look over the bank at a highway deer crossing sign and you’ll often see dead deer, too badly injured by cars for the healing liquid. Are we sinners seeking God any different from such a wounded animal, except that our Saviour promises us forgiveness and restoration.

Finally, in the prophecy of Isaiah 35:6, he describes Zion’s joyful future: “Then the lame will leap like a deer, and the tongue of the mute will shout for joy.” We have all seen a deer jump as it eyes us and runs to get away from possible danger. The misfortune Isaiah was referring to was the captivity of the Jews. They would experience their return to Jerusalem and the rebuilding of the temple. So, as I said earlier, deer in scripture represent beauty, hope, agility, health, and nutrition, to name a few.

My mother had five surviving brothers, all of whom hunted and included my two brothers in their activities. We were all raised in the woodlands north of Pittsburgh. One had only to step out the door to find game to hunt: deer, turkey, bear, rabbits, squirrel, pheasants, grouse, groundhogs, you name it. Of course that was back in the 50’s when I was still in elementary school. By the  60’s our immediate family had moved to the populated area of Pittsburgh’s West Hills. By that time my uncles had moved out-of-state, my brothers were in college or the service, and I was hunting a girl friend. After I married the love of my life, we moved to the mountains of Northern Appalachia and began raising children. Although I carried on the deer hunting tradition for a few years, mostly going into the woods alone, I soon realized more satisfaction from watching the deer at the mineral block of our back porch than shooting at them. Several years ago, after 40 years of allowing friends and neighbors to hunt on our small farm, I found several deer carcasses in the front yard, and fearing that hunters had shot them and left them for dead, I posted the property.

This was in keeping with my practice of not mowing my fields until I was certain the newborn fawns were able to get up and run safely. Unfortunately, my avid hunters/neighbors began planting plots of plants attractive to the deer herd so they could easily kill them. I don’t see as many four-legged horned creatures on our farmette these days. We’re going to be moving one of these days, so I don’t want to voice my objection and stir them up. I keep remembering that they have larger families than I and guns too.