Thomas “Tommy” Lee (1816-1900) was my wife Susan’s great-great grandfather who lived in southern Somerset County amid his wife’s Anabaptist families. Although long said to have been an Irish orphan adopted by Amish Bishop Benedict Miller, we now believe that his father, probably of the same name (b. 1780?), had been somewhat older than Tommy’s mother and may have died before age 60, leaving his wife Catherine (b.1794) with 8 children. Thomas, Sr., used a middle initial, but it is illegible in the 1830 Census. So, I guess it depends on your definition of “orphan” whether Tommy qualified, but we might say more accurately that he was “apprenticed” by the kindly Amish Bishop, giving him many skills to survive in what was then the Pennsylvania mountain wilderness. Aside from leaving a large extended family, Thomas, Jr., or “Tommy” as we will call him, is perhaps best known as the maker of high quality spinning wheels, several of which are displayed at the Pennsylvania Historical Museum in Somerset, PA. This article provides some humorous stories and additional background on one of our talented ancestors and even some speculation as to his origins.

Let’s begin by working backwards from the 1906 History of Bedford & Somerset Counties that reads, “Thomas [Tommy?] Lee was born in Milford Township.” Tradition suggests that our Lees came to Somerset County from down East in 1825, when “Tommy” would have been 9 years old. While there is a Milford Township in Somerset County, this may be a reference to Milford Township in Bucks County where a John Loe (Lee?) was reported farming adjacent to David Sellers and Henry Nase in 1798. Could this have been “Tommy’s” grandfather? In another article we’ll explore other Lees and similar sounding surnames in early eastern Pennsylvania, of various national origins and religions. A quick check of the Somerset County Censuses shows no Lees here until after 1820. If our Lees were Irish, perhaps they originally moved in or near a small settlement of Irish immigrants called Paddytown in what is now Upper Turkeyfoot Township. “Paddy” is a nickname for the popular Irish name, Patrick. The patron saint of the Emerald Isle, Patrick has come to represent all Irishmen but can be derided by non-Irish, using the term “Paddy.” A Paddywagon has a negative connotation, insinuating that the police carriage hauls Irish criminals.

Thomas, Sr., is [probably] gone by the creation of the 1840 Census. Son Joseph with wife and child are listed separately as remaining in Milford. He is the head of his household, but are they living on and/ or working the family farm? Probably. By this time mother Catherine (age 40-50) had moved to nearby Elk Lick Township with 9 in the house, and interestingly, 1 is recorded as “insane.” What is the extent of this disability? Could Thomas, Sr., still have been alive but had dementia? Did one of the older children have a mental handicap? Research indicates the use of another word, “idiotic,” another of 5 illnesses, medically undocumented and self-reported, including “maimed,” “blind,” and “deaf,” which precluded a mature person from being able to work on the day of the census enumeration.

When Tommy Lee, an Irish orphan boy, found his way into the Amish community at the foot of Negro Mountain, he could not speak German and was apparently taken advantage of by some of the local residents. Benedict learned of his plight and paid Tommy’s debts by giving his creditor corn and eggs from his own farm. He no doubt allowed Tommy to earn his provender by working for him, for Tommy seems to have learned his skill in woodworking in the Miller shops. (23)

What “debts” could a “boy” have other than needing food, clothing, and shelter, or was he acting as head of mother Catherine’s household by that time?

Family tradition continues after 1842, when Tommy married Elizabeth Brenneman (1816-1890), the daughter of Daniel and Maria Bender Brenneman. They moved to Addison Township, near the famous National Road, now Rt. 40 and Interstate 68. Tommy is listed as a “wheelwright.” Does this mean that the maker of fine spinning wheels also crafted buggy wheels? Probably, because the income from the former would have been limited while the latter would have been lucrative, especially along the well-traveled Pike and among the local Amish. The couple raised 6 children. First born, John T. (1843-1914), also maintained the Amish way of life and is remembered for having been gored to death by a bull at age 71. His descendants still meet regularly for reunions around the country. Tommy and Elizabeth were 42 years old when the last was born, Christian F. (1858-1906), Susan’s great grandfather. In 1869, the Lees moved back to Elk Lick Township. The Beers Atlas of 1876 shows the Thomas Lee farm in Elk Lick Township Had Tommy bought or inherited the farm? Our late uncle Clyde Krause copied an early deed from the Somerset County Court House that shows this property in Catherine’s name. See the Lee Table of Contents for an actual reproduction of that document. See also “On the Trail of Our Early Lee Family,” written in celebration of the 200th anniversary of Tommy’s birth.

The 1870 Census for Elk Lick Township lists Catherine as age 76, born in PA. “Tommy” is 53, and Christian is 13. Other of Catherine and Thomas, Sr.’s, children are married and spread around southern Somerset County. The location of Thomas, Sr., and Catherine’s graves is not known at this time.

According to the Welfley history, son Christian had completed his schooling by the age of 19 (1877). After helping his father and neighboring farmers, Christian “rented a farm from his father” in 1883, situated in what is known today as the village of Niverton, and purchased it one year later. See the wonderful photo album posted by AmishAmerica.com containing scenes of the present-day Amish community in and around Niverton. 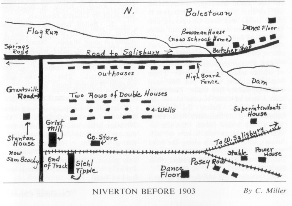 The Niver Coal Company opened a deep mine nearby in 1889, and the village became known as “Boomtown” for its commercial success. The land had been purchased from Christian “Crist” Lee and several of his Amish neighbors. A branch of the B. & O. Railroad was constructed to haul the coal out. Apparently, on of the Lee boys, Harry, had the job of riding the railcar out of the mine. The full account of the wild life in Boomtown is available in The Casselman Chronicle (V. 5, Nos. 3 & 4, 1965). Evan Miller tells the story of his father stopping for dinner at Crist’s home after church, and later that afternoon some of the men from the mine brought horses used in the operation to drink at the water trough. At least some of the men were drunk or still suffering with hangovers from the night before. One fell off one of the horses and landed on his back near the trough, swearing up a storm. Mr. Evan and Crist were standing on the porch taking it all in. According to the account:

Crist rebuked him and told him to stop, that this was no way to talk, especially as there were young people present. At first the man paid no attention, but when Crist again and in a sterner tone ordered him to stop such talk, and started to go down the steps toward him, he did stop and mumbled a sort of apology.

The younger Miller tells how he was trembling all over but remembers how brave he thought “Brother Lee” must have been to dare to talk to the drunken man and make him stop his cursing.

Christian had married a descendant of one of the first Amishmen to settle in Somerset County, Hannes “Indian John” Miller, Sr. He took Laura Catherine Speicher for a wife in 1883, and they had 6 children. Daughter Annie was my wife Susan’s Amish grandmother. Christian lived on the family farm until his death in 1906. The log cabin where Annie was born was moved from the late Bennie Yoder farm in Summit Township to a rural location in Elk Lick Township and, unfortunately, is today in ruins. Thomas and Elizabeth are buried at a farm just over the hill from Niverton (see Photo Album: Lee), where he went to live after her death. Christian and Laura lie in the Mennonite Cemetery in nearby Springs.

Anna “Annie” J. Lee Krause (1885-1971), Susan’s grandmother, left the Amish to marry Charles Frederick Krause (1884-1973), a Lutheran from The Cove, MD. The couple farmed in Berlin and Jennerstown. Their fascinating story, “A Journey between Two Passages,” may be found in the Krause Table of Contents.

While the Lee original family narrative requires some additional research to “fill in the cracks,” the news is both good and bad. On the one hand, plenty of written references are available in documents and publications at places such as the Casselman Historians archives and the Springs Historical Society Museum, the older Amish in our county are dying off and taking their stories and memories with them. Fortunately, the internet has made accessing research and graveyards much easier. You are invited to join the quest for new information, and when you do, please forward your findings to me so that I can share them with the multitude of “Tommy” Lee’s descendants around the world.