Before, During, & After the World Wars: Hill-Moon Family Letters & Cards, Part III

Transcribed with [Comments]
by
Larry Pearce, great-grandson
with memories from
Grace TeSelle, granddaughter
2/5/21 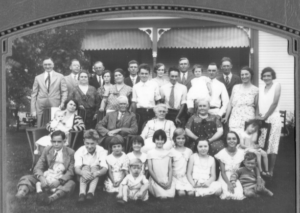 As we learned in Part II, after the death of her husband Joe in 1939, my Great-grandmother Alice made plans to live in several rooms of the old farm house. At the same time, her Uncle Sam had died out in Kansas, and she forwarded information given by her Aunt Turie to have his body brought back to Mars by train for his funeral. In the letter that follows, Alice is 80-years old and her son Harry, who was running the farm, apparently can no longer do so. It’s winter, so Alice has moved in with her daughter “Mayme,” who lives closer to the big city of Pittsburgh. But, Alice has other concerns back there in 1945, which may remind you of the concerns of Americans today during the Pandemic. 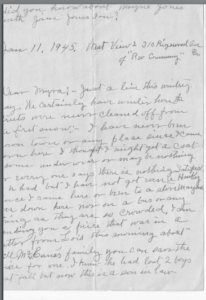 Dear Myra, Just a line this wintry day. We certainly have winter here. The streets were never cleaned off from the first snow. I have never been downtown [Pittsburgh] or any place since I came down here. I thought I might get a coat & some underwear or maybe nothing, for everyone says there is nothing. Satisfac[tion] to be had, but I have not got even a hanky since I came here or been to a store. Mayme was down there, not on a bus or anything as they are so crowded. I am sending you a piece that was in a letter from [name illegible] this morning about Will McCune’s family. You can save the piece for me. I knew he had lost 2 boys last fall, but now this is a son-in-law.

[Comments: While I don’t have the envelope in which the letter came, I see an addition to the “West View” address next to the date: 310 Ridgewood Ave., PA and the comments, “of Rev. Crummy.” It’s obvious that Mother Alice, now  80-years old, is staying with her second oldest, daughter Mary “Mayme” Crummy, then 57-years old. Mayme is married to The Rev. Dr. Hugh Russel Crummy, and the northern shore of the Ohio River  neighborhood where they live, West View, is still a very old and stately community. Alice had been be allowed to stay in a portion of the old Joseph Hill farmhouse, even after he died in 1939 and son Harry took over. Harry died the year this letter was written, 1945. Grace still remembers that a family of five lived in the rest of the old Joe and Alice farmhouse. She says that the father taught her how to play chess. Alice’s portion of the residence was originally the parlor. A kitchen was installed there for her. She slept in the bedroom above the parlor, but there wasn’t much privacy. Grace’s impression of the accommodations could be summarized in a word: “Gloomy.” Another fond memory is of the piano in the parlor when Alice was alive, which Grace “pretended to play.” The instrument was later moved to her mother Hulda’s place to make more room for Alice. Although Grace eventually took piano lessons, she was starting high school and didn’t make make time to practice. Besides, she says, she wasn’t a “natural.”

[Another memory for granddaughter Grace is the night she and her sister Irene (letter to follow in Part IV) were out with their Uncle Alex Nicely, widower of Hazel who as mentioned earlier had died giving birth to twins in 1932. He was the township warden in charge of enforcing wartime blackout exercises. These were conducted periodically in the area since it was so close to Pittsburgh, a steel and weapons manufacturing center. Apparently, the lights were on at the old Hill farmhouse, so Alex and the girls made a visit. The lady there was in her final stages of delivering a baby with no time to get to the hospital, perhaps an hour away. Alex brought in a neighbor who he knew was a nurse, and the delivery was successful – “with the lights on. All went well,” says Grace.

[Even if living accommodations were provided for Alice, it sounds like this had been a particularly bad winter, and she was getting rather old to stay by herself, so it was time to move in with family. It sounds as if Alice is frustrated, not unlike so many folks today during the Pandemic, that she can’t go anywhere of buy anything. Again, it is wartime, and it is winter, even though  the downtown Pittsburgh shopping district is just a few miles away. And besides, the public transportation is very crowded, no place for an elderly woman.

[We don’t know who the “Will McCune” is, who has lost his two sons and a son-in-law, we presume in the War. Unfortunately, we cannot read the person’s name who sent Alice the letter announcing this. Worse, there are more wartime deaths to be named in the letter.]

I certainly am glad they got you a nice stove. Do they allow you to bake buckwheat cakes on it, or do you just have to look at it and wish you had your old one in again. Again, I am wondering if the war will ever be over. Is Walter staying in town and working during the Holiday time? Was that Walter Allison’s son [who] lives in Butler? Certainly is too bad that so many have to go over there.

[Comments: If Alice’s wry sense of humor is evident in her comment above about not being able to buy even a hanky, we feel some sarcasm over asking her youngest daughter Myra if “they allow you to bake buckwheat cakes, or do you just have to look at it and wish you had your old one?” First, who is “They?” Her son-in-law Clarence? Her children? I guess we would need to know who bought her the new stove AND the inside story. Alice changes the subject and asks about Myra’s son Walter. Like my father Ralph, mentioned in Part I, some in that family were employed by a rural telephone company, whose job it was to provide phone service to northern Allegheny and southern Butler Counties during and after the War. “Walt” would have only been a teenager when this letter was written, and we don’t know where “in town” was, so more questions need to be asked, perhaps of family. Alice’s thoughts return again to the War, as she asks about another young soldier’s death in the War.] 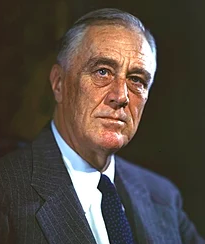 I saw in the paper today [that] they are after the election board because they counted such [a] large majority for one and so few for the others. Just a few votes and I have never talked to anyone since the election [who] will say that they voted for Roosevelt. So why is it [that] he is where he is?

[Comments: My wife Susan and I had a hearty laugh over this paragraph that reminds us so much of the modern-day Trump controversy over election fraud. How often have we heard a Pennsylvania Republican claim, “I have never talked to anyone who will say that they voted for . . .” Like most of our conservative Republican families, the Moons and Hills didn’t like anyone being elected to the nation’s highest office four times, despite his social programs to lift us out of the Great Depression. But, Mr. Roosevelt would be dead within three months of this letter, and the awful world war would be over later that year.]

I am glad you have you meat all in shape for winter. Mayme said you could ask at Brant’s, just above the Park, how to get in. It is not far from the Park. (It is to the left after you pass the Park.) I do not know just how to tell you, but you can come that far and ask some[one]. I will close as Mayme has supper ready. [Unsigned, but someone has written in pencil “Grandma Hill (Alice) – probably Nettie or the younger Alice.] [Postscript atop side one:] Did you know about Wayne Jones’ death, Jane Jones’ son?] [end of letter]

[Comments: With so many farmers in the Hill family it’s hard to say where Myra got her meat for the winter, although Grace believes that farming in the Hill family had ceased by 1945, except for her cousin Dale (1918-1981) who had taken over for his father Clarence and grandfather John “Walt” Hill along Three Degree Road just north of Alice and Joe’s place. In Northern Appalachia where I live, Thanksgiving Day morning used to be the time for “butchering.” The animals were as fat as they were going to get, they wouldn’t have to be fed during the winter months, the cold weather meant the carcasses could be hung outside for “curing,” and best of all, there was lots of help with family, friends, and neighbors having a Holiday to help each other. As far as “Brant’s” and “the Park,” that’s another question I’ll have to ask Myra’s kin. Neither Grace nor I have clue. One thing is certain: Alice is keenly aware that daughter Mayme “has supper ready,” and it’s time to close. Unfortunately, the letter ends with a postscript mentioning another victim of the War.]

This letter was quite interesting and even enjoyable. So many allusions that could have been made in today’s world: The election results and the War as a pandemic that greatly affected the nation’s economy. Mentions of Rev. and Mayme Crummy’s West View residence brought back memories of other of my mother’s family who lived there about the same time. As a young student, I recall many happy class picnics at the nearby West View Amusement Park. However, in 2005, our family gathered around our mother Ruth as she passed away at the hospice section of an old Catholic Convent near West View. If that was a sad time, it confirms that as we all live and depend on each other, one day we will all die. Please spend some time in the other portions of our transcriptions and comments below.