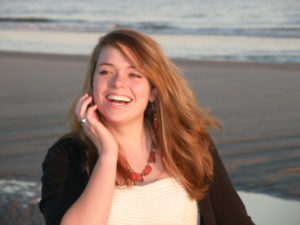 Michelle – Never far from the ocean

What is a “grandniece”? Webster defines her as “the granddaughter of ones brother or sister,”and yes, Michelle is the granddaughter of my brother, Paul. That definition is  simple, but I have four grandnieces in my Pearce family, and they’re all very different. Alexis* is a world traveler, foreign language instructor, and Ph.D. candidate at Stanford University, a real brain. Taylor is a West Point graduate, a medevac pilot with a Black Belt in the U.S. Army, and many other identities, as tough as they come. Jordan is studying hospitality at Robert Morris University, a very sensitive sort. I remember helping her with an essay when she was only in the 9th grade. That leaves Mary “Michelle,” who grew up in the deep South and has a degree in Graphic Arts and Design from Clemson University. She graduated and moved to Hawaii in 2016. There was lots waiting for her to do there. Her everyday title now is Technical Publication Associate at the University of Hawaii’s Applied Research Labratory, but she was almost immediately cast in a television commercial, her side interest, for a service station and convenience store chain known as HELE. In my quest to find out more about how folks talk and live in Hawaii, I learned that “hele” means “to go, to move, or to come,” and that this company has over 35 locations on the islands. That sounds like our local Sheetz. I also was shocked to learn that the concept of “Hawaii as Paradise” is now under some scrutiny. I hope Michelle’s contribution to the culture there doesn’t add to that controversy.  Apparently the casting directors for the commercial were looking for a “fiery redhead,” but seems to me what they got was more of a kind-hearted, strawberry blonde (at least in some pictures), who I simply can’t imagine doing what she does in the advertisement. Bottom line, what she is is beautiful, inside and out, always a quality that sells. So, before we hear more about Michelle, here she is in her short commercial, “Rebel Redheads”. 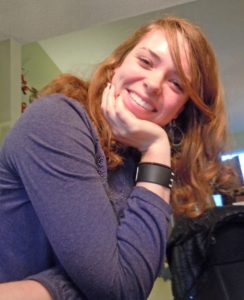 Are you impressed? Wow, a real film star in the family whose address is Hawaii, no less. But Michelle grew up in humble Mount Pleasant, South Carolina, just across the famous and fancy Ravenal Bridge from beautiful and historic Charleston. She attended Clemson, as we said, something this Penn State grad tries not to think of come football season. Her Grandparents Paul and Cynthia Pearce also went to school in Happy Valley, by the way. Michelle’s mom and dad are Stuart and Beverly. Living so far away, I really didn’t know too much about her, so I asked her for her bio. This is what she sent me, and I find it very much in keeping with the context of this article:

“Mary Michelle is a visual artist, graphic designer and film producer working in Honolulu, Hawaii. She works at the Applied Research Laboratory (ARL) at the University of Hawaii as the Technical Publication Associate. She collaborates with engineers and scientists to conceptualize multi-media projects that are visually compelling and strategically messaged. She graduated from Clemson University with a degree in Visual Arts and has worked as a graphic designer for Clemson’s College of Engineering, a visual display intern for Anthropologie, an apparel and home design center, and now the administrative assistant for Hawaii Filmmakers Collective (HFC). Since moving to Hawaii, she has worked on several film projects in capacities ranging from production assistant (PA) to producer, production design to artistic design (AD), director to actor. Currently she is co-producing the pilot of a web series, Like Maddah, which started principle photography in April 2019.” 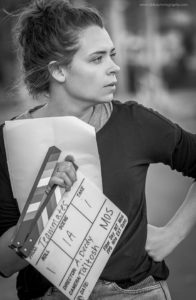 Since this poor hillbilly from Northern Appalachia couldn’t fly to Hawaii and interview her for additional, maybe more personal, information, I sent her the following questions:

“Did you mostly grow up in Mt. Pleasant, where your dad does private contract work for the Navy and your mom is a church administrator?” She replied, “I lived in Jacksonville, FL, for about five years when Dad’s work changed. But then it changed again and we moved back.”

“Why did I think you had considered a school beyond Clemson?” She said, “I had looked at nursing at a college down in Alabama, but the arts and design were my first love.”

“How did you meet your husband?” Her answer was simply, “We met on the 4th floor of the library at school my freshman year and have been together ever since.”

“Anything else of interest?” This was my favorite come-back: “I’m interested in everything!”

I was amazed at the possibilities when I searched her name on the internet. First, on the right-hand side of the screen, came a picture of her with the caption “Global Citizen.” OK, I guess living in Paradise, excuse me, Hawaii, one would encounter many ethnicities and really feel that way. But, then came more of her many accomplishments, like the 2017 Watt Family Innovation Center award for her display entitled Lighthouse.

Recently, Michelle was the guest on a video blog called Cutting it Close, a production of Cliff Bailey on PhazonMedia.com.  For more and, I hope, regular updates on our Michelle, go to her InstaGram account or search the web using her name. Very best wishes Michelle. Keep up the good work.  Indeed you are a “Grandniece” in every sense of the word.

*Some links here are to personal Facebook pages or professional LinkedIn accounts that require membership and acceptance.