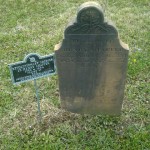 When researching a family patriarch, it’s always nice to have a military figure going back to the American Revolution as the subject who has been recognized by a national organization and honored with a memorial in a local cemetery. Such is the case for Lt. Henry Shaffer (1751-1834). On September 15, 1973, a marker was placed on his grave in the Friedens Lutheran Cemetery, Somerset County, PA, by the Daughters of the American Revolution (DAR). In this article we’ll recount some of the things that were said in paying homage to our brave soldier and consider his ancestry and descendants. We’ll also look at the origins, spellings, and meanings of the Shaffer name.

First, it’s important to locate the Shaffer name, seven generations and over two hundred years before my wife Susan’s time. Most of the research for the celebration of Henry Shaffer’s life was done by Alice Long Wiatr, whom we believe was a descendant of the Quemahoning Long (or Lang) family, neighbors of the Shaffers from whom our Joseph “Yost” Miller married a daughter, Marie Catherine. Wiatr believes that Henry’s grandfather was Simon Shaver of Frederick County, MD, a veteran of the French and Indian War. She says that Henry’s father, Henry, Sr., moved north into Pennsylvania at some point and settled in Monaghan Township, York County, where the younger Henry was born. Henry, Sr. served as a private in the Revolutionary War. Records in the Pennsylvania Adjutant General’s office list the younger Henry’s term of service from 1776-1783 with the York County Militia. He was Second Lieutenant under Col. Matthew Dill’s Fifth Battalion but reached the rank of First Lieutenant two years later with the First Battalion.

With the signing of the Ft. Stanwix Treaty (1784) between the Colonists and the Native Americans, many eastern Pennsylvania settlers considered it safe to migrate into the Allegheny Mountains and beyond. That’s about the time Henry Shaffer paid taxes on 200 acres of land in Quemahoning Township, Somerset County (then still Bedford County). Several years later, as a veteran, he was able to purchase another tract, this one 300 acres for which he paid only 10-pounds per acre. A similar third parcel was eventually acquired in neighboring Somerset Township. This enormous real estate investment, parts of which stayed in the Shaffer family for four generations all under heads of household named Henry, became known as “The Homestead Farm.”

It’s not known when or even if Henry officially married his lifelong consort, referred to simply as “Agnes,” but together they had eight children beginning with Rebecca in 1777, just after he began his seven-year hitch in the Army. Our Mary was born five years later. Ironically, at least four of the children were baptized at the same time, August 30, 1787, in the Friedens Lutheran Church in Somerset County, for which Henry donated 40 acres. This plot was to be shared by both the Lutherans and the German Reformed congregations in the community. Both Henry and son-in-law Joseph A. Miller were charter members. Incidentally, the baptismal certificate is the only public record that refers to wife Agnes.

Henry signed a last will and testament five years before his death in 1834. He used his German moniker, “Heinrich Schafer.” His estate was valued at $4,602.08 at his death.

Wikipedia.com reminds us that “Schaefer” is an alternative spelling for the German word “Schäfer,” meaning shepherd, which itself descends from the Old High German “scāphare.” The additional alternative spelling “Schäffer,” and the anglicized forms “Schaeffer,” “Schaffer,” “Shafer,” and “Shaffer” are all in common use as surnames. According to HouseofNames.com, the name Shaffer comes from the word “shaffaere” in Middle High German and refers to a steward or balif, or the manager of a household or jail. The first use of the surname was in Hesse, Germany, which is ironic as Henry probably fought the Hessian mercenaries in the Revolution, perhaps his own ancestors, who made up as many as one-third of opposing forces.

BabyNamesWorld.com agrees with Wikipedia that the name most likely refers to a shepherd, or one who cares for a flock. I think we can see that the common sentiment is “caring,” and that certainly captures the attitude and philosophy of our Henry Shaffer, from citizen-soldier, to farmer-community organizer, to husband and father. Ancestry.com reports that most Shaffers first settled in the German communities of Pennsylvania, then some migrated westward into Ohio, Indiana, Illinois, and beyond. That certainly applies to the thousands of Henry Shaffer’s descendants. Today, the Shaffer name is quite common in Somerset and neighboring Cambria County. Perhaps the most notable is Daniel Shaffer’s, Inc. in Hooversville, an old appliance and variety store, practically a household name. Others are Shaffer Block and Concrete Products in Somerset and Shaffer’s Personal Care Home near Stoystown, to name a few. We believe these are all descendants of Henry Shaffer.

In conclusion, we invite you to Google one of the several variations of the surname Shaffer for a list of famous namesakes and the contributions they’ve made to America. Likewise, more information is available in the Vitals for Henry and wife Agnes as well as daughter Mary Anna and her husband Joseph A. Miller. Writing an introduction is easy, if not complete, when the subject has been honored by a national organization such as the DAR, thoroughly researched by family, and memorialized in a local cemetery. We hope the next time you’re in “America’s County” you’ll stop a minute in the little village of Friedens, along Rt. 281 just north of Somerset, the county seat along the Pennsylvania Turnpike, and pay tribute to the memory and personage of our Lt. Henry Shaffer.