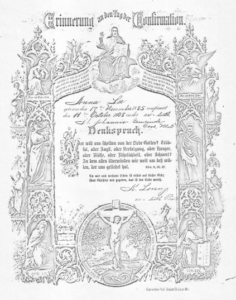 In cleaning and organizing my family files recently, I came upon a copy of an old  certificate with the title, “Erinnerung an den Tag der Confirmation,” dated October 11, 1908. It was written entirely in German. Of course, I recognized the word “confirmation,” the same in English, and the name, “Anna Lee,” no doubt my wife’s maternal  grandmother, who was raised Amish in Pennsylvania with many names: Annie, Mom, and now the German “Anna.” My first thought was to try my hand at the tips I learned at a recent genealogy seminar at the Heinz History Center in Pittsburgh, about which I wrote an article for the quarterly Mennonite Family History, entitled “Google Like a German.” My son Matthew, who lived in Germany as a student, also encouraged me to use the free service rather than depend on his translation skills that are fading after a quarter century. As it turns out, the literary conversion to English was the easy part of my task as several other mysteries came to light and had to be solved. 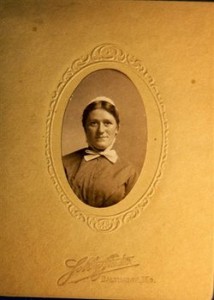 I learned that “Erinnerung” means simply “Remembrance” and “Tag” is “day,” so the certificate is titled logically enough, “A Remembrance from the day of Confirmation.” The sheet is a standard issue from the Lutheran’s Concordia Publishing House in St. Louis, MO, according to the mark in the lower right-hand corner. Ironically, the graphics around the outside of the script, excluding the text, match those of the 1893 St. John’s Lutheran Church confirmation certificate (below) of a supposed Carl Ferdinand Krause, Annie’s husband Charles’ father. But, here’s a mystery. Grandfather Carl had been born in Prussia in 1840 and wed in Baltimore in 1872, a year after emigrating to the U.S. So, we believe that the 1893 certificate is for his son Charles Frederick Krause (1884-1973), whose birthday matches that on the paper and would have been 9-years old then,  ready to join the frontier church in Western Maryland.  All of his father Carl and wife Margaret’s 11 children had been born before 1893. Surely the wrong name was a clerical error. Incidentally, Carl’s farm was next to the church, and he was recognized as the first bell ringer after the church was built in 1864. 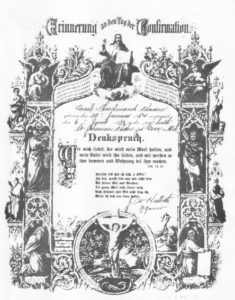 The graphics on both certificates show Christ in various poses with appropriate scripture underneath, but the striking thing to this avowed Protestant is the rather large crucifix of Christ at the bottom. I thought we had broken away from the Roman Catholics 500 years ago. At any rate, the earlier Krause certificate has difference script within the graphics, but includes Charles’ correct date of birth, the name of the church, and the Pfarrer/pastor Halboth’s  name, which agrees with my 1964 centennial booklet for St. John’s Lutheran in the Cove, where the Krauses still hold their reunion each August.

The newer certificate prominently announces (in German, but translated here) that “Anna Lee was born November 17, 1885, and confirmed October 11, 1908 in St. John’s Evangelical Lutheran Church, Cove, MD.” Then, in large print, the word “Denkspruch,” which means “Thus Proclaiming.” This is followed by a paragraph of scripture from Romans 8, verses 35 and 37, which I put into modern English from Susan’s Bible:

Who will separate us from the love of Christ? Will tribulations, or distress, or persecution, or famine, or nakedness, or peril, or sword. But in all these things we overwhelmingly conquer through Him who loved us.

Well, that was easy! Now the hard, but most interesting part, the two lines between the scripture and the pastor’s signature. Upon Googling the words in German and asking for an English translation, I learned that they are from a 17th century Lutheran hymn, still popular today, entitled “Ist Gott fur mich, so trete,” or “Is God for me, so enter.” The words were written in 1631 by German Paul Gerhardt (1607-1676) and set to music at various times by both Polish-German Melchior Teschner (1584-1635) and German Felix Mendelssohn (1809-1847). The hymn can be found in over 60 hymnbooks around the world and reinforces all of the scripture found in Romans 8: 31-37. The complete hymn’s full translation is available online. The best part for me was listening to the actual singing of the hymn in different styles and tempi by both a soloist and a small group on Youtube. Here are the two lines of the hymn on Anna’s Confirmation Ceertificate, with rough translation:

An mir und meinem Leben (As to me and my life) ist nichts auf dieser Erd’ (is nothing on this earth); Was Christus mir gegeben (Was Christ given to me), das ist der Liebe wert (this is of dear worth).

The inspiration for these words come from the familiar Romans 8: 31:

What, then, shall we say in response to these things? If God is for us, who can be against us? 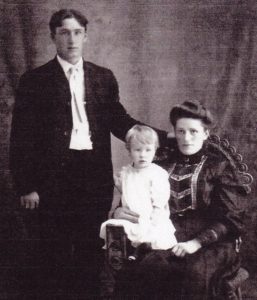 The final mystery of the Confirmation certificates again involves names and dates and perhaps church policies. Grandmother Annie Lee was married to Charles Frederick Krause July 19, 1908 in St. John’s Evangelical Lutheran Church, Cove, MD. She was just 22-years old. That was nearly three months before her Confirmation certificate was given to “Anna Lee.” I can understand that the official paper was late in coming and probably contained the name of the young Amish woman from when she first enrolled in Confirmation class, but did the Lutheran church back then require confirmation and membership before marriage? This is reminiscent of the strict codes of the Roman Catholic Church, of which the crucifix at the bottom of the certificate reminds us. We’re seeking the opinion of someone versed in Lutheran church history. Stay tuned, or better yet, if you have a sure answer, send it in the comment section below.