My Grandfather Paul B. Gray, the Gardener 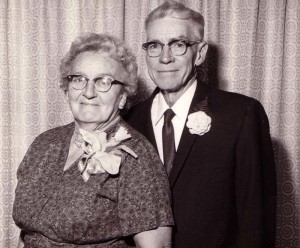 “Grandpap Gray” (1892-1977), as all of us 30 grandchildren called him, was the father of a dozen kids and a finish carpenter by trade. By the way, I haven’t stopped to count his great-grandchildren and beyond. In addition to the siring of my mother Ruth, his eldest child, he helped my dad Ralph build our first house in Cooperstown, Butler County, PA. He was admittedly quite shy by nature, but a man of many talents. My mother often told the story of him stopping his horse and buggy at the mailbox at the end of the Campbell lane to pick up Grandma Bertha while they were dating because he was just too bashful to face her parents. After they were married, Paul built the couple’s first house just down the road from his Gray family farm in West Deer Township, Allegheny County, but the expanding family soon outgrew that space. Ruth related this background to me on her life growing up [redacted for clarity]:

In the early 1930’s [my] father purchased a small farm in Middlesex Township, southern Butler County, and [our] growing family moved. [It was] “a regular truck garden.” [We] raised corn, tomatoes, and all kinds of vegetables. In his spare time, [my] father Paul ran a small produce stand along busy Rt. 8 in nearby Cooperstown. Cousins named Norris’s eventually took over and ran it successfully for many years when [Ralphie and we settled in Cooperstown,] about a mile south of there. [I] was about 14 when [our Gray] family moved north. [I] didn’t want to start into another school district, so [I] took a job not far from the market at the Kalgeon Restaurant. The next year [I] did similar work at what was called the Nursery Tearoom, about three miles south along Rt. 8. [I] wore a uniform with a white apron and cap. Along with waiting on hungry customers, [I] learned to cook. The thing that [I] remember the most is meatloaf. But beef was not the only meat that [we] ate in those days. Dad had sheep, ducks, rabbits, and probably some hogs, and he’d clean those and Mother used to can the meat. Just like the restaurants, and reminiscent of the heavy animal feed sacks Grandpap handled, the Grays bought a lot of their food in 100-pound bags: flour, sugar, and beans. [I don’t] ever remember going hungry, and [our] most common fare was mashed potatoes and navy beans. [My mother’s] brother Will supplied [us] with potatoes and apples from the original [Gray] family farm. In addition, [we] had one cow for milk and a couple of work mules named Amos and Andy, named for the black comedians [we] would listen to on the battery radio at night. 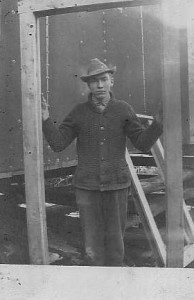 Read more about those good old days in her interview with me entitled, “My Mother Ruth, Part I: The Early Days” and “Part II: Her Parents & Grandparents.” Mother emphasizes her dad’s many talents, but this brief article you are reading concentrates on Grandpap Gray’s gardening skills. The inspiration for my words comes from the discovery of an old manual that I inherited after his death, over 40 years ago. It is called the Better Homes and Gardens Garden Book, second edition, copyright 1954. The original magazine BHG was founded in 1922 and was a reading staple in our home all the while I was growing up. After 64 years, the Garden Book is still available through E-bay, Amazon, and other online services for anywhere from $3.00 to $25.00. My almost 500-word precious artifact is contained in an 8 1/2 X 11” five-ring binder with a multitude of colorful plants, flowers, and berries on the front. Though the pages are yellowed now, the information contained within is still very much valid to the gardner, whether hobbyist or professional. Grandpap had written page numbers, references to the 19 chapters and generous index, on the front and inside cover. What’s most endearing is that the the writing is in various colors of pencil, pen, and even crayon, probably whatever he had in hand at the time of his study.

While I can’t decipher all of the markings, most of the page references are true to the contents inside. For example:

As you can see from the picture, the crude scribbles on the cover are anything but neat. But, there are several mysterious scrawlings that inspire our imagination:

We have no idea where “EAL” might be, but probably “SOC” is an abbreviation for “Social Security,” and is perhaps the amount Grandpap received in his 60’s when he first had the manual, $74.50 per month. That hardly seems like a living retirement today, but by using an inflation calculator, Paul’s monthly check today might be $700 for an annual amount of $8,400. It’s hard to imagine two people today, even with an abundance of garden produce, living on that amount. We’re certain that because Grandma Bertha never worked outside the home (how could she, with 12 children?), she never received Social Security. Likewise, we doubt that they had any savings, but the big advantage was that a large family would add to their support, maybe just in groceries. If you read my mother’s story above, you know that Paul and Bertha “lost” their farm during the Great Depression and sent some of the children to live with friends and family. This was not an uncommon situation during the terrible 1930’s. The good news is that the bank was satisfied and the farm was soon back in the hands of my grandparents.

If page references and pencil marks are any indication, some of the curious subjects that Grandpap was interested in included Chapter 1, “Lot Planning”; Chapter 11, “Maintenance, Tools, and Storage”; and Chapter 19, “Garden Reminders”, including what to plant when in the central eastern part of the United States where he lived. He has a note, true to what my mother always said, that corn planting day is May 10th. Mother was also quick to add, “And the oak leaves should be as big as squirrel ears.” That sounds like an old Scots-Irish metaphor, but it still works for me. In addition to hundreds of plant names and subjects, Grandpap Gray’s manual has tucked away inside several newspaper clippings and small notes.

My grandfather was elderly when I was conscious of his many talents, so I can’t say that his interest in “lot planning” (Chapter 1) fit his situation. The manual shows, among other things, how to position one’s driveway with respect to the house. After all, the book was intended for a middle-class  American  suburbanite, I’m sure. Paul lived on a small farm in the country where more often than not visitors just parked on the grass. I’ll have to take my mother’s word that he had a massive truck garden because by the time I was old enough to really know him, if that’s possible, his major gardening days were over. But, I’m inspired that he read so much about the proper way to use tools and care for flowers, plants, and shrubs. I can still hear my mother say that Grandpap didn’t always go to church or attend family get-togethers away from his house, BUT that he was a man of faith who read his Bible everyday and loved his family. This probably brings us back to the original character description, that Paul Gray was very shy and felt uncomfortable being around people. Today, psychologists would refer to him as an introvert. That certainly fits some Gray descendants, including myself. But so too does his love of and gift with plants fit some of his heirs. As Mother Ruth would say, “We have a ‘green thumb.’”

PIX – flowers in our living room and/or front yard