A Tribute to my Brother Paul on his 70th Birthday 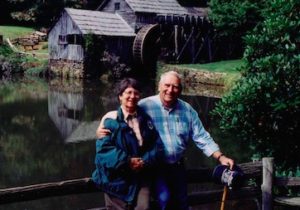 Paul with wife Cynthia
at the Old Mill, VA

Paul Wesley Pearce was named for his grandfathers: his mother Ruth’s (1917-2005) dad, Paul Gray (1892-1977), and his father Ralph’s (1917-2002) father, Wesley Pearce (1876-1955). This idea wasn’t too far from the Scottish custom of using grandparents’ surnames as middle names for children, in a criss-cross manner. For example, Paul might have been Paul Campbell Pearce and his sister Ellen Hill, and so on. Instead, their father Ralph (1917-2002) got his mother’s maiden name, Hill. The important thing, though, in looking back at several centuries of family names on both sides, is that big brother carried on a tradition of nationalistic and/or biblical names. While there was never a King Paul or Wesley, Saint Paul and John Wesley are still giants in the Church. We’re not sure what St. Paul’s “thorn in the flesh” was, but we know Wesley fought with his brother Charles, was unlucky in love, and had low self-esteem, considering himself at first a failure in his new calling. The Holy Spirit eventually got a hold of both men and the rest is history, as they say. In what follows, I’d like to record for history my recollections of a big brother who was always special and there when I needed him.

I guess I was about eight years old when he turned sixteen and bought his first car with money he had earned helping around Crawford Parks’ farm. Was it a 1949 Buick? All I know is that Paul still had his car until he went off to Penn State in 1958, even after our brother Carl “Butch” had crashed his. Carl had gone into the “levee” with his Chevy one rainy night but it wasn’t dry and he nearly died. Actually, he ran off the road and wrecked, but that’s alliteration, and I like rhyme and old songs better. Later, as an impressionable ten-year old, I had the feeling that sibling rivalry was always on our Cooperstown doorstep. Maybe that’s our mother’s Scots-Irish temperament. Paul related a story in a 2004 eulogy at Carl’s funeral: One evening at the supper table Paul and Butch got into an argument over dessert. Our father, with his cool-headed British demeanor, told them to “take it outside.” Our birthday boy can tell you what happened next, but all I remember was that Paul had a split lip that required stitches. Oh, and apparently Carl got bragging rights to the pie.

Our late brother Carl didn’t particularly like growing up in the shadow of his talented and hard working brother. The Birth Order Book explains the conflicts that can arise between first borns and those who come after. If Paul got to ride the tractor around the Parks’ farm, Carl got to muck the pig manure out of Norris’ sty. If Paul was the newspaper-noteworthy first string fullback for the Mars High School Planets, Butch never made it through training camp. If Paul majored in business at Penn State, Butch had trouble graduating from high school. Except for Carl’s early demise, the redeeming part is that both brothers served honorably in military aviation and went on to do what they loved: Paul flew airplanes and Carl drove trucks. The beautiful homes they built and families they raised were icing on the cake.

Now it’s my turn. As both a third child AND first born of a second set of off-spring, I too have a strong work ethic, can be strong-willed, and yet suffer from hero worship of siblings who have gone before, according to the birth order theory. Unfortunately, our mother let it be known more than once that she actually wanted a girl but got me instead and that she and Dad tried again until they got their girl. Imagine the vacuum that left in my psyche. We lived in Cooperstown, Butler County, until the end of Paul’s sophomore year in college. The years before we moved to Allegheny County were both some of the worst AND best a young boy could have. Our dad had changed jobs and commuted the long, tiring pre-Interstate 79 Orange Belt from Butler County to the West Hills of Pittsburgh. When he was home, his mind was on the yard, garden, chickens, and turkeys. Sometimes I wonder if he thought that since he had raised two boys already, “Little Larry” can probably take care of himself. Add to those feelings what my mother said about wanting a girl and no wonder I was so shy and backward. As for the best things, perhaps all I need do here is simply list the activities that my beloved big brother Paul engaged me in and you’ll see why he meant so much to me: hiking, camping, hunting, trapping, listening to music, playing tennis, and so on. He taught me where to set up a campsite and how to build a fire. I learned how to shoot a gun and kill an animal humanely. He had been a Boy Scout and had grown up with uncles who had been in the military. I inherited mess kits and knapsacks; I gleaned all those outdoor skills and knowledge through my brother, and I’m eternally grateful. As for Dad, It really wasn’t until much later that I came to admire our father for how hard he had worked to provide for his family and the things he did for my family.

As I said, our family moved from Mars to Moon when Paul was halfway through college in 1960. Remember the punchline to the old joke, “but he found us anyway?” He earned money in the summer for tuition, working for a professional painter. As if eight hours on a ladder weren’t enough, sometimes he would ask me to bicycle to the tennis courts near our new home to meet him and hit the ball around. This chubby twelve-year old could barely return the serve over the net, but with the patience of Job, Paul would pass on the instructions for proper form and technique that he had recently acquired at Penn State. Of course, out of sheer exhaustion and frustration he would occasionally lose his temper. Perhaps that’s where his affectionate knick-names for me originated: “Bone Head,” “Edsel,” and so on. But, that never dampened my appreciation for his effort and I continued to play tennis throughout my college days.

As you may know, I went on to graduate from music school, but I don’t think that would have happened without having inherited my brother’s record collection after he married and went off to the Air Force. I practically wore out the 33 1/3 soundtracks to the musicals  Porgy and Bess, West Side Story, Carousel, Oklahoma and the monophonic classics like Rhapsody in Blue and American in Paris and symphonies by Shostakovitch and Rachmaninoff. We both loved Benny Goodman so I naturally played the clarinet in high school. I still play from the collection of classical piano works he gave me for my birthday one year and carry his high school graduation gift to me to client appointments, a hard shell briefcase.

Susan and I wouldn’t have thought of getting married without including my brothers, their kids, and my sister in our wedding party. I don’t know who did what that day, but let me just say that it was a memorable occasion: Someone wrote “Help me” on the bottoms of my shoes that could be seen from the back of the church when I knelt during the blessing; someone put horse poop on the hood and engine block and under the seat of the honeymoon car, which we didn’t discover until we were driving through the lighted part of a busy small town that night. I believe that buck stops with the senior member of the groom’s party, Mr. Paul Pearce, oldest brother.

If our parents changed residences twice in my lifetime, my brother moved many times in his: Florida, Connecticut, Virginia, sometimes buying an old place and fixing it up or sometimes building a brand new “estate,” as if setting an example for family and friends on how to “flip it” for a nice profit. I guess I never got that message because, after 35 years in the same location, I’m still as satisfied as the day we moved in. After his career settled, our father Ralph spent what seemed like every available minute helping his kids make their homes more comfortable. While other fathers retired to golf and travel, our dad’s joy was applying his effort and expertise in plumbing, electrical, and work ethic to his kids’ lives and dwellings. With four of us in competition for Dad’s attention, maybe Paul felt he had to “tease” him away from Butch, Ellen, and me with building and remodeling activities. Perhaps the most important thing is that I visited most every home my brother Paul established, almost like idol worship, trying to learn from his new experiences but more importantly maintaining that family relationship. Sometimes I probably stayed too long or maybe asked the wrong questions, but I always looked up to my big brother.

Despite all of that, one descriptive term that immediately comes to mind when I think of Paul is “generous.” Among many examples, I could cite the assistance he gave my new career in finances when he paid for insurable interest in my two children. Those policies enabled me to be named “New Agent of the Month” with New York Life in 1990. Another time he hauled three sheep, Prunella, Amanda, and Danny, on the back of his pickup truck hundreds of miles from Connecticut to Boswell, PA, to get my ranching career started. I honored him by naming our firstborn lamb “Paul.” I learned enough about live stock investments to sell the little guy for a good price. I still have his pelt and I’m still in the sheep business.

No doubt I’ll recall additional memories after I send this to Paul on his seventieth birthday, but my avocation as family genealogical narrativist (spell check tells me that that isn’t a word, but you get the idea) will allow me simply add those to this tribute in the months and years to come, which I pray both my brother, our families, and I have yet to live. The bottom line is that I truly love and appreciate my oldest brother and can’t imagine where or who I’d be without his wisdom, guidance, and generosity over the years.

* Last revised 2/3/20 as a link to a new “Legacy” article about Paul and his wife, Cynthia. References to actual years and time have not been changed to keep the historical perspective, although some circumstances mentioned within have. I look forward making further additions and revisions to this piece later this year as Paul celebrates his 80th birthday.