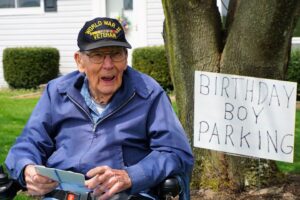 as posted by Fred Caesar
on Facebook’s “Saxonburg Here for You”,
The Historic Society of Saxonburg, &
The Saxonburg Volunteer Fire Department 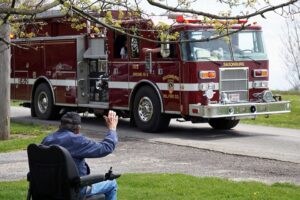 Happy 97th Birthday to Jim Stark! Mr. Stark turned 97 on Friday, April 24, but on Saturday his friends celebrated his birthday with a parade outside his home. The Saxonburg Volunteer Fire Company led the parade of motorcycles, cars, and pickups, many waving flags and displaying signs with birthday wishes. Jim Stark is a World War II veteran. He was among the men who stormed Omaha Beach in Normandy on June 6, 1944, as a part of the second wave of D-Day troops. After the war, in 1946, he purchased what was the Helmbold store on West Main Street, where Citizens Bank is now located. He had a grain mill and feed store in the building until 1962. Best wishes and thank you for your service to our country and your years of supplying area residents with farm and various other supplies. 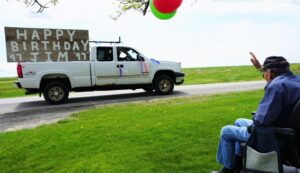 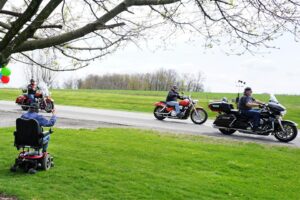 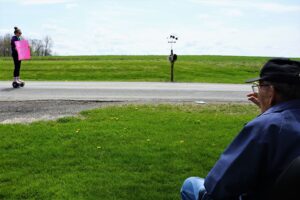 See more photos at the above Facebook & other links!

Return to complete article on the life of Jim Stark