A Eulogy for Brother Carl

By
The Rev. Robert Brierly McCrumb
Delivered at the
Funeral of CARL DALE PEARCE
at the Mars United Presbyterian Church
December 15, 2004 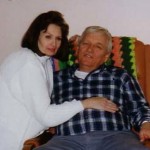 There’s two or three things to understand. There’s some straight chairs back by the controls for the audio-visual system. And that was almost by invitation. You had Paul Bahm there, then you had that big Kahuna Carl. Then you had some kids who would almost do the pie fight thing to get there. I’m not talking now about little kids; I’m talking about high school and college age and even older than that. More than anything else, Carl was a friend.

Sunday morning it was just heart breaking here because we had just gotten word and people were saying, “This was the first guy I met when I came into that church, and he was there year after year after year.” We talked about several snafus in the bulletin. There’s another one and it’s totally my fault. I wanted, instead of [Psalm] 121 which I use so often at funerals, to use 122, and just this first verse always grabs me:
I was glad when they said unto me, “Let us go into the house of the Lord.
Our feet have been standing within your gates, O Jerusalem.”

Carl went to see the grandchildren. Carl helped on the bridges. Carl did things like that, but there were very few Sundays when Carl wasn’t back there greeting people. And I think if you were to really press him on it he would say that that was the foundation of his week.

Sitting behind me is a lady [the organist] who probably 30 years ago gave me a little plastic sign that the sun and the ultraviolet rays have broken down so that it’s almost in tatters now, but it says, “Trust me; Do it MY way.” Well, I’m an agitator and I’m a con artist and Carl was my biggest challenge, because there was metal in Carl, or steel, or character. I don’t know what you might want to call it, but once Carl got something straight in his mind, [there was] no deviation whatsoever. And he loved to figure, as Ken said. I think without a doubt the greatest story of any of them, and I’m not going to develop it, but Carl’s truck before the last one wasn’t worn out yet, according to Carl. And in Carl’s mind this thing had miles and years to go, but there were absolutely no creature comforts. Now Carl figured out a way to put a sleeper on it, but the BIG challenge was Carl was trying to figure out heat from a generator on the cheap. And Carl played with this and worked with this and twisted and molded until Carl got what he wanted. Then in the last few years when he moved over into the green truck and life became a lot easier, I really believe that Carl used his trips to think and to meditate, and much that he brought home from those trips were the foundations by which he lived his life.

Remember the period, and it’s still today, when every truck had to have a CB radio? Well, it was kind of embarrassing to Carl, because he had the CB radio, but he broke down–he blew up the truck in fact–up in New York stat one time, and he didn’t have any radio to call for help. Because Carl liked to drive around and not be bothered by the chatter on the radio—just to think. He’d think about some of the darndest things—we’d talk about them. But, one of the things that Carl thought about often was, you know, how cars and trucks will come out on the interstate from the entrance lane. They never slow down, figuring you’re going to pull over. And Carl’s concern was always, as he was a driver, a moral man, if he’s forced into a situation where he can’t get out, and these vehicles come like this, what could he do? Those were the kind of problems that Carl worked with. And I use that just to say that he was just about as much of a moral straight shooter as any man I’ve ever known.

I could tell a lot of stories, but instead I want to spend just a few brief moments on one thought: If that bulletin had been right and those birth dates were right and Carl was 82 instead of 62, this wouldn’t be such a difficult service for us, would it? We’re walking around thinking, “Carl got cheated.” We really, really wanted Carl to be here for the other 20 years, And we don’t know who to be the more frustrated with: the doctors, the health care system. We just don’t know, but it’s very convenient to blame God. This is the thrust that I want you to get: I know Carl didn’t blame God. His friend and co-worker Howard Krupp reported that Carl said earlier in the fall that he’d either be very, very sick or dead by the end of the year if he didn’t get that transplant. It didn’t work out, but the point we need to deal with as family, as friends, as church members is to understand that what we celebrate now on this day, in this month—we celebrate God coming down in Jesus Christ to bear our infirmities, to bear our sorrows, to bear our short comings. I always hear these people say, “Oh, it’s such a shame. My loved one died at Christmas time. We’ll never have Christmas again without thinking of the death of our loved one.” But, I submit to you instead that you’ll never have Christmas time again without thinking about the salvation of your loved one given by God through Jesus Christ. Now you can deal with it anyway you want to. I’m on my third funeral director in Mars, and way back from the beginning to the present we’ve always gotten into some hard funerals right at the Christmastide. But truth be told, what better time to lose someone we love than this! Because the totality of the promise comes to us.

You know, we Presbyterians are kind of a wildcatter outfit. We do not get quite as holy as we ought to sometimes, and sometimes I’ll go to a funeral and I’ll hear a clergyman stand up there and talk about the conversion experience of the deceased. All I want to tell you is that this daddy, this husband, trucker, this head usher, this friend, this family member was a dedicated man of God. And in His love, God has taken him home. We’re going to miss him, but we do need to understand that there is no doubt that Carl has gone home.

PRAYER: O Lord God, indeed as we walk down life’s path, all of us see these ones we love going ahead, and we’re caught with the idea of trying everything we can to get them to stay here awhile longer, grasping. But, Lord God, help us to go ahead in full stride, to know the love of our family, of our friends, of the environment around us, to realize that as Carl has gone on ahead, young Ronnie takes his place: one to reach out in the name of Jesus Christ and to greet. And as Carl goes on ahead, his son, his daughter, continue his interest in the lives of their children. In all things, O Lord, keep the fullness of our faith before us, And unto the mercy of almighty God we commend the soul of our brother departed and we commit his body, earth to earth, ashes to ashes, and dust to dust, in the sure and certain hope of the resurrection to eternal life through Christ Jesus our Lord, for their works do follow them. Amen.