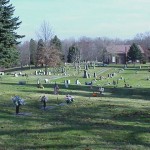 Our Gray family tradition says that my Great-great-great grandfather James Gray sailed from Northern Ireland in 1790 with the Rev. Abraham Boyd. We have little information on James except that he may have been only 10 years old then, if he was 70 and the James Gray in the 1850 US Census for Allegheny County. Recently we posted an article outlining several other possibilities as to the origins of our Pioneer: James Gray. We believe that he married Mary Patterson in 1805, and was probably also born in the 1780s. Along with my Great-great grandfather William Sylvester, they may have had a son named Dan, who is said to have worked in the lumber business. Not James’, nor Mary’s, nor Dan’s tombstones have been found with the rest of the Grays in the family church plot in West Deer Township, Allegheny County, PA, and they were apparently not official members of the adjacent Bull Creek Presbyterian Church, according to session minutes. [We haven’t yet checked land transfers under their names to see if they preceded son William, my, on the Gray family homestead just up the road, about whom more definite information exists.] We’ll learn in a minute that William’s wife Elizabeth Leslie was probably a member of the Bull Creek congregation, according to church records, and we know for certain that they are both buried along with many of their in-laws and related families in the church cemetery: Leslie, Norris, Brown, etc. [See the cemetery records and tombstone inscriptions]. 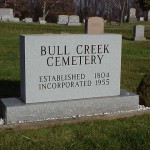 Final resting place of many of our families

This article will explore life on the Pennsylvania frontier in the late 18th and early 19th centuries. We don’t know much about (3X)Great-grandparents James and Mary, but thanks to Bull Creek’s present pastor, the Rev. Dr. James Legge, and several church historians, we are able to give you a glimpse of pioneer life among these Scottish settlers, and in particular Bull Creek’s first pastor, Rev. Abraham Boyd. Their lives are a part of an ongoing project of recording church history, which most recently was described in a bicentennial anniversary book. 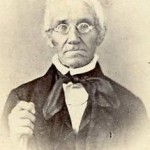 The Rev. Abraham Boyd was born about 1770 in Scotland. He sailed to America in 1790. The Bull Creek Cemetery has at least a dozen Boyds interred, but one inscription shows a Captain John Boyd (1737-1817) as an American Revolutionary War veteran. He was the paymaster for the 8th Regiment, Continental Line. Was he Abraham’s father, and was his rank of Captain pertaining to his military service or sailing experience? He had obviously been in America long before Abraham. John’s wife may have been Mary (1750-1825), who is also buried at Bull Creek. Abraham’s wife was Agnes (d.1861), according to one tombstone, but church records list a Mary E. Boyd who died and was buried there in 1854, perhaps a second wife. Abraham was the first and longest serving pastor of the Bull Creek church. According to A Guidebook to Historic Western Pennsylvania, the first worship held by local Presbyterians was conducted outdoors in 1796 (46), after which they began to hold meetings in each others’ cabins, with itinerant preachers. Dr. Legg says that one settler in the area, named Cartwright, had recently been killed by Indians, but the growing band of fearless and staunchly independent pioneers decided they needed a church in which to meet on a regular basis. So, they purchased the land, where the church and cemetery are still located, from an Ezekiel Day. One of the eleven charter members of the church was Sarah Day, perhaps his wife. By 1802, the first structure, made of logs, was completed and the group sought a permanent minister. They called Abraham Boyd, a well-liked young man of 32 years of age. The Erie Presbytery ordained him, which is interesting because this area was originally part of the Redstone Presbytery but is now part of the Pittsburgh Presbytery. [See “Faith of Our Fathers: Part II”]. He served Bull Creek church until 1833. That date is significant for another reason as well; the church decided to construct a smaller, brick sanctuary, because the old wooden one was supposedly too large and inefficient to heat. That proud brick structure still stands today, surrounded by the Bull creek Cemetery on three sides. We wonder whether there was some controversy over the matter of constructing a new building when the old one was still serviceable, thus causing Rev. Boyd to consider retiring, Or, perhaps he had led them in the project in the first place. We do know that his eleven charter members had grown to 176 in his 31 years of ministry. Twenty years later, however, the ever-growing congregation had to built yet another sanctuary across the road, which is still used as a recreation hall.

According to the church bicentennial book, “Abraham Boyd was universally beloved in his community.” A man of prayer, who seemed to “grow in grace as he grew in years,” he was, it is said, never known to be idle. He apparently was not shy about his spiritual values. For example, when asked how he could choose a preacher, he replied, “By his prayer. If he makes a dull prayer, he will give a dead sermon.”

Boyd loved riding horseback, not that he had much choice in getting from place to place in those days. He once rode 300 miles to Philadelphia to attend a Synod meeting on the back of one of his horses named “Stumpy.” His other horse was named “Barney,” by the way.

In Philadelphia he met a man who later needed some church research done, and when Abraham did it, he was paid $25, probably more than he had ever seen at one time. The story goes that he consulted with his youngest son before deciding to buy a new suit. The irony of the situation was that Rev. Boyd died several months later and was buried in it. 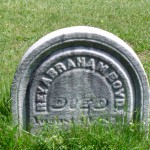 The Rev. Abraham Boyd died on his Tarentum farm on August 14, 1854, in his 84th year, 11 years after concluding his formal ministry to the Bull Creek congregation and only a year after they had built their fourth place of worship.

As we said at the outset, my Great-great-great grandfather James was said to have sailed to America with Rev. Boyd, and he lived in West Deer Township, but we have no record of him or his wife Mary belonging to the Bull Creek Church or being buried there. Nor did my Great-great grandfather William Sylvester Gray join the church. His wife, however, may be the Elizabeth recorded as leaving the formal fellowship through death in 1893. [No date is given for her joining, and her tombstone says she died in1895]. But, both William and Elizabeth are buried at the church. Sometimes it seems that only one spouse maintains membership in a particular family church with the other being content to stay on the roll at his/her family church. Perhaps James, Mary, and William will show up someday on the rolls of another church. No Pattersons are listed for either the Bull Creek Church or Cemetery. Also, notice that some, such as my Great-grandfather Robert Patterson Gray, joined apparently during adolescent confirmation at age 14. It seems unusual, however, that my Grandfather Paul could have joined when he was only 10 years old. The following Grays, then, have been recorded as members of the Bull Creek Presbyterian Church at one time and are significant in my family history:

The Leslie and Norris families’ church records provide a rich source for research, though some ideas will surely be pure speculation and conjecture. Some of the Norrises belonged to the Deer Creek Church. The comparison of membership names and dates to cemetery inscriptions should, however, eventually provide confirmation who our ancestors were and when they lived. While it is difficult to learn and more about their lives, we can read about their contemporaries, such as The Rev. Abraham Boyd, and gain a great deal of insight into what life was like for these Western Pennsylvania pioneers.

Smith, Helene, and George Swetnam. A Guidebook to Historic Western Pennsylvania. Pittsburgh: U. of Pittsburgh Press, 1991.