The family history stories on this webpage are usually positive, or at least have a happy ending. This one is an exception; ironically, I believe that the subject was an extraordinary  human being whose short life ended needlessly as a result of the careless actions of his college  classmates. It’s one of those stories that causes even the most devout believer to ask, “Why did this have to happen?” My great-grandparents William James and Rachel Elizabeth Hoffman Campbell’s youngest child, Ellis Emerson Craig Campbell (1906-1926), was studying for the Presbyterian ministry when his life was taken at age 19. His given name was derived from the Middle English for the biblical Elijah or Elisha, meaning “God is salvation.” No doubt, Ellis’ middle name was after the beloved American poet Ralph Waldo Emerson. His second middle name, a custom not unusual in those days, was after his Aunt Sara Jane’s husband Charles Sumner Craig.1 By all accounts Ellis, the fifth son of “Will” and Rachel, was a fine young man with a promising future and always a big help around the farm. One source says that he had a great interest in music.2

After high school, Ellis began further studies at Muskingum College, New Concord, Ohio, but later transferred to Westminster College, much closer to home in New Wilmington, PA. Both schools are private Presbyterian institutions. Though the details of his death are sketchy, it is believed that he died as the result of a hazing incident, a silly student prank, in his freshman year. It may also have been a case of what we would call today, “bullying,” although it would be hard to believe that anyone would try to push around a farm boy. 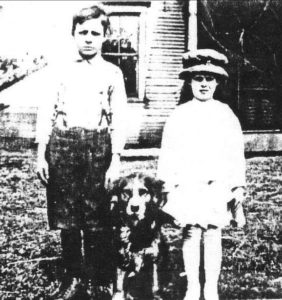 One family member who investigated the tragedy only recently found that Ellis had transferred as a music major with the intention of changing his major to pre-ministerial, what today is called Religious Studies, one of 37 majors there. We have to ask, “Would he have survived to serve God had he stayed at Muskingum?” The young Ellis may have been attracted to Greek life on campus, as are many college freshmen. Or, the hazing could have been a rite that all freshmen went through “in the old days.”3 If, however, Ellis had become involved in the lead up to social fraternity life, he would have first attended what is sometimes called a “smoker,” or public get-to-know the brothers party; then would come acceptance into membership and orientation; then Ellis would have had to undergo that which all fraternities have always been involved, the “hazing” process. Today’s tragedies in the news, especially at Penn State, has acquainted Americans with what often can go on there: Drinking, teasing, abusing, and so forth. Now, we don’t know what happened that night in October, 1925,4 when the event occurred, but Presbyterian young men, especially fraternity brothers, were probably no different then as they would be today. The report that we have calls what happened simply, “a hazing incident.” As no names are stated, we don’t even know that it was Ellis, but the date and death certainly match. The disclosure continues: “At some point a young man was taken to a cemetery.” In New Wilmington that could have been the Neshannock Presbyterian or the Fair Oaks Cemetery. “The young man was then blindfolded, taken to the center of a road, and left.” Was this Ellis? Was he also bound or tied up in some way where he couldn’t escape? He must have had complete faith in his “brothers” for his safety. What happened next was beyond belief: “He was hit by a car,” the report says. We have been unable to learn what transpired after that. Was he only bruised and battered? We believe that his injuries must have involved some kind of head trauma, probably a concussion. As at Penn State, was the victim simply dragged to a couch somewhere and left to recover? Did he receive medical care? The nearest hospitals would have been in New Castle, about 30 minutes south, or Grove City, about 45 minutes east. We only know that at some point, Ellis was taken home to West Deer Township, where after five months of what must have been utter agony, he died. 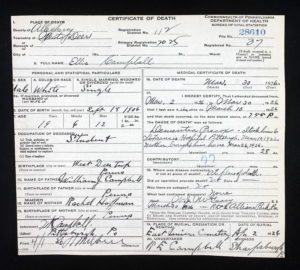 According to the State death certificate, after returning home, Ellis was taken to St. Francis Hospital in Pittsburgh5 by father Will on March 10, 1926. After two weeks there, and with apparently little hope, his mother Rachel “brought him home.” Ellis passed away March 30, 1926, at just 19 years of age. The death certificate was signed by his attending physician of nearly a month, Dr. W.J. McGeary. Ellis’ body was prepared for burial by the local Sharpsville funeral director, R.E. Campbell.6 We can find no published obituary and don’t know if a public viewing or memorial service was held. All these things cost money, and Will and Rachel, dirt-poor farmers, certainly didn’t have that. Our research continues into this tragedy, and we’ll report any additional findings in a revised version of this article, so check back.

Ellis was buried in the Campbell family plot at East Union Presbyterian Church, Cheswick, PA, where they worshiped. He was joined there by his parents and other relatives over the next several decades.

We’ve saved the “cause of death” until now because this is perhaps the most interesting part of our investigation. Without an autopsy or test, if that’s possible, to determine what killed Ellis, the death certificate simply says, “Dementia praecox.” Other names for this cause are “premature dementia” and “precocious madness,” both horrible labels. This  official cause on death certificates is no longer used, as a psychiatric diagnosis or otherwise, but the term has a long history, simply summarized as “rapid cognitive disintegration, usually beginning in the late teens or early adulthood.” Today, the term has been supplanted by the diagnosis, “Schizophrenia.” Unfortunately, this label has been associated with antisocial behavior and even suicide. There are no indications of either on the death certificate, and we don’t know at this time whether Dr. McGeary practiced medicine or psychiatry, nor what actually spelled the end for Ellis.

Before concluding, one more bit of information provides hope. After so much news of the hazing abuses of fraternities on college campuses, public awareness is pressuring university leaders to institute new guidelines for Greek life. At Westminster, after the Sigma Chi fraternity was suspended just three years ago for their abuses, the College webpage now promotes “National Hazing Prevention Week,” sponsored by the Panhellenic Council. Furthermore, the page has a special section for parents answering specific questions such as, “What happens when a violation of fraternity or college policy occurs?” Unfortunately, the answer here ends with, “Ultimately, each chapter’s national organization has the authority to hold its fraternities and brothers accountable for violations.” At Penn State, the legal battle over the death of fraternity member Timothy Piazza has cost millions of dollars and will continue for years. As for our Ellis Emerson Craig Campbell, the portion of the official report that we have simply says, “The incident was taken to the Board and there was a court settlement.” A year after the death of Ellis the Board passed a “No Hazing” statement. At this time we don’t have a copy of it, nor do we know what that means. One of the College publications of that period reports, “The annual flag rush and all hazing having been abolished by faculty action, the practice of observing the second Saturday of the fall semester as ‘Freshmen Stunt Day’ was initiated in September 1927.”

Rabbi Harold Kushner’s book, When Bad Things Happen to Good People, speaks to these special kinds of tragedies in a meaningful, if arguable, way. How could God allow his own servants to suffer and die? Though Kusher believes that God has ordained such terrible misfortunes early in His eternal plan, others hold that, not unlike in Job’s trials, God “allows” such painful events to refine and actually strengthen the survivors in their faith. In the case of Ellis Emerson Campbell, he is with his Heavenly Father now and all is well. Best of all, we, the faithful, will soon be with all who have gone before.

Various webpages as linked above