“George,” ending in “E,” is a common enough name, so when I see my wife Susan’s maternal great-grandmother’s Georg maiden name spelled without an “E,” I sometimes cringe. Whether a first or last name, modern Georges just always seem to have that “E” on the end. This may seem trivial, but having faced misspellings of my last name continually (“Pierce” or many other versions rather than the correct,”Pearce”), I understand the sensitivity surrounding this matter. After all, ones name and the correct spelling thereof is part of ones identity. So, in this article we’ll try to discover how this omission came to be. Also, along with running our Georg family line from Western Maryland back to Germany, we’ll investigate the original meaning of the name and list some famous folks with the name “George.”

Unlike many other German Anabaptist ancestors, Susan’s mother, grandfather, and on back, were staunch Lutherans, as far as we know. Her Great-grandfather Carl Ferdinand Krause (1840-1912) was born in Prussia (see map) and naturalized in the US in 1884. He married Margaret Georg (1856-1941) when she was only sixteen. He would have been twice her age. A strong woman, bearing him eleven children, her life stretched from just before the American Civil War until the start of World War II. Like many of her generation,  in the years leading to that conflict, she was mindful of the tragedy of German-Americans about to fight relatives back in the Old World. Her father John (1821-1907) had died before the start of the first World War. He was born in Baron, Germany, and came to America with his father, also named John, and two brothers. After the German naming customs, we believe that Johannes was probably the given Christian first name. Richard Roher lists Margaret’s grandfather as “unknown,” although he could have be a John or Johannes also. We believe that he stayed in Germany. 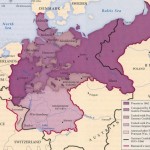 Great-grandmother Margaret’s mother was Louisa Smearman (1825-1861), who was born in Germany, married in Western Maryland, and produced Margaret as a second child, but died just after the birth of the third, Susan’s Great-great uncle Charles G. Georg. Her grandfather Charles Krause was probably named for him. Uncle Charles G. farmed in Jenner Township, Somerset County, near to where we now live. Great-great grandfather John Georg remarried, this time to Kathryn Fisher, and fathered nine more children. One of the great-granddaughters relates the story of a favorite event called the Peanut Scramble at one of the large annual Georg family reunions. Christine Ellen says, “The children were all gathered but we had to wait for someone to wheel Great-grandma out from under the shelter so she could see us. After the peanuts were all gathered, I went up to her and showed what I had gotten because it seemed important for her to be a part of the festivities.”

Where did our Georg’s (with no “E”) come from? From nobility? Is our Georg family descended from George “The Bearded” Duke of Saxony (1471-1539)?  Did our John Georg family descend from one of the four generations of regional administrators known as John, Elector of Saxony (1585-1694)? As in many cultures, some of the given names in our family probably pay tribute to such great leaders, in this case the Elector’s issue: August, Christian, Magdelena, and Marie, to name a few. The Ancestry.com family message board refers to Johannes C. Georg, born in Saxton, Germany in 1815. Was he another “John” Georg who found his way to Western Maryland? Public records say that some of these Georg’s came from Stroessendorf, Bayreuth, Germany, after 1840. Today, some are buried in the Accident, MD, German Lutheran Cemetery. We know, however, that our closest Georg family members are buried at St. John’s German Lutheran Cemetery in the Cove, named certainly for the Apostle but perhaps also with the aforementioned “Johannes” in mind.

From the original Greek, “George,” with or without the “E,” means “farmer” or someone who worked the land. According to HouseofNames.com, the English version, spelled “George,” usually contained the “E” but was rather rare in Medieval records. During the Crusades, and more contact with the Orthodox Church, when the legend of Sir George the knight slaying the dragon ( 303 AD) was immortalized, St. George became the patron saint of England and the name became as common as any biblical moniiker. Today, an annual feast honors his victory over satan, symbolized by the dragon. The first namesake to immigrate to America was Griffeth George, who landed at the Virgina Plantation in 1619. The name George is strongly associated with U.S. Presidents, from Washington to the two Bush’s. The entertainment world measures success from comedians George Burns and George Carlin, from Star Wars director George Lucas to actor George Clooney. Who knew that baseball giant Babe Ruth’s actual first name was George? There really are too many famous Georges to list here.

No matter how one spells “George,” with or without the “E,” our family has been true to the original meaning of their name, “farmer.” Some of the old Georg farms in Western Maryland are still being tilled by our distant family. Whether we came directly from the powerful German Electors or not, we can be proud of the hard work undertaken in the New World, providing for our families and feeding America.